While still a male-dominated industry, women are increasingly involved in making wine throughout Virginia and play vital roles in each stage of the process.

Here, we highlight three Virginia wineries with female leaders who are turning grapes into gold.

High on a mountainside in Amherst County, some of the nation’s finest wines are being produced at Ankida Ridge Vineyards.

Their 2017 pinot noir was named the second best wine in the world by VinePair in 2020, out of more than 2,000 bottles from around the globe. 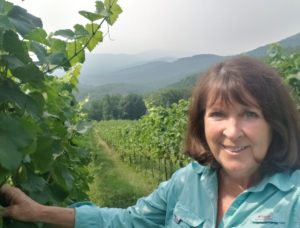 Their pinot noir is so popular they have had to take it out of distribution, says Christine Vrooman, co-owner of the vineyard with her husband Dennis.

In fact, their wine is in such high demand they have also stopped selling to restaurants and closed membership in their wine club.

After two disappointing grape harvests in 2018 and 2019, Christine is hopeful they will have more pinot noir in 2021, but they intend to keep their vineyard small, with six acres under cultivation.

She named their property Ankida Ridge, after reading a book about ancient Sumeria. The word “ankida” means “where heaven and earth join.” The view from their tasting room, facing Tobacco Row Mountain, is breathtaking.

Christine initially got the vineyard off the ground while her husband Dennis kept a veterinary practice going in Virginia Beach.

Being oenophiles, they thought it would be fun to grow grapes on a cleared lot near the retirement home they built off U.S. 60 in Amherst County and found they had great soil for pinot noir grapes.

“The best wines are made in the vineyard, not in the cellar,” Christine says.

Their son Nathan moved back east from Denver and became their winemaker. His first wine debuted in 2011 and has been gaining attention ever since.

Christine, though, is the backbone of the operation. “I do everything but equipment,” she says.

She is also the planner, hoping to become a destination for small weddings, forest bathing, and folks who enjoy fine wine paired with spectacular views.

Favorite wine and pairings: “I don’t have a favorite!” Christine protests, but adds their rosé of pinot noir is great with light meals; the Chardonnay with cheese and creamy tarragon dishes; the pinot noir with salmon, duck, and mushrooms; and the vino vert with spicy foods.

In 1989, Dennis Horton and longtime business partner Joan Bieda acquired 55 acres in Madison County to start Horton Vineyards. The task of establishing the vineyard was given to Dennis’ wife Sharon, a nurse by trade.

“Mom’s been in the grapes the whole time,” says daughter Shannon. “She’s been the vineyard manager since the first year after it was planted.”

Dennis was the first to plant viognier in Virginia and on the East Coast, she said, calling him the savior of a grape that was planted on only 85 acres in the world. His 1993 viognier “kicked everybody’s tuchus,” Shannon adds.

The Hortons have been featured at the Smithsonian’s National Museum of American History’s Winemakers’ Dinner, an annual fundraiser for the museum’s American Food and Wine History Project. In 2019, they won the Virginia Governor’s Cup for their 2016 petit manseng.

With 67 acres in vines and 18 varieties, Shannon says, “My mother brings in 400 to 500 tons of fruit a year,” while Caitlin works full time in the cellar.

“We want the winery to be a name that’s synonymous with quality and a passion for winemaking in Virginia,” she explains.

Favorite wine and pairings: Shannon chooses Albariño, a Spanish grape that pairs well with a bowl of mussels in a white sauce with fennel and saffron.

Kiernan, who manages the vineyard, says the farm has been in her family for 300 years and it’s still a family affair. “We live on the farm and my parents and brother and sister-in-law also live here,” she notes. 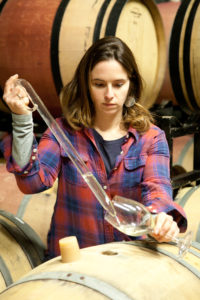 To keep the farm viable, they decided to try their hand at growing grapes in 2010 They cultivate four reds and three whites and are involved in everything from “root to glass.”

Her mother Alice does everything from harvesting grapes and helping in the tasting room to labeling bottles and leading the landscaping effort, while her father Bob is the “tractorist,” running the equipment between rows of grapes and mowing surrounding fields.

They power their building with a solar array. “We want to create land use that’s as responsible and low impact as possible,” she says, noting that the solar power has already paid for itself.

Their French winemaker is Katell Giraud, who holds a degree in winemaking from the University of Bordeaux. She grew up in a family-owned vineyard and has helped Slater Vineyards win a number of gold medals in the Atlantic Seaboard Competition, the San Francisco International Wine Competition, and the Harvest Challenge.

Kiernan recently attended a program at Veritas Vineyards in Afton on women and wine. “It’s really exciting to see how many women are in the winemaking industry in Virginia,” she says.

February 13, 2019
Learning How to Wine and Brine in Virginia

Learning How to Wine and Brine in Virginia