Scenic Reminders of Days Gone By

Virginia is home to some of the most fascinating bridges in the world—from modern-day bridges spanning miles over coastal waters to historic covered bridges found in the rolling hills and highlands of the Commonwealth.

Covered bridges became popular in the United States during the 1800s when engineers began developing covered structural systems for increased strength and longevity. Weather conditions generated additional wear and tear, and covered bridges provided some protection from the elements.

Covered bridges were sometimes called “kissing bridges” during the modest era of the late 19th century, as the privacy from passing through a covered bridge would allow passengers in horse and buggy an opportunity to kiss each other unobserved.

The Sinking Creek Bridge was built in 1916 on VA Route 601 leading into the Clover Hollow section of Newport. Part of the Greater Newport Rural Historical District, the bridge was originally used for horse and buggy travel and is one of the few bridges in that area to survive more than a century.

In the fall of 1998, the Newport Village Council organized a restoration project to preserve the historic bridge. “After initial cleanup, new footings were poured to support the bridge, holes were repaired in the side walls, and a local volunteer painted the sides and roof of the bridge,” said Linda Kaiser, a librarian and archivist for the Giles County Historical Society. “The deteriorated asphalt walkway was removed, and a 47-foot brick walkway was constructed, including more than 225 engraved bricks to honor those who helped to restore the bridge.”

While you’re in the Newport area, some nearby attractions include the Andrew Johnston House, Cascade Falls, Palisades Cliffs and Restaurant, and Mountain Lake Resort. The Sinking Creek Bridge is also located near access for the Appalachian Trail for those wishing to hike, and canoeing and fishing opportunities are available on the New River.

Just south of the town of Mount Jackson, Meems Bottom Bridge is located on Wissler Road off U.S. Route 11. Originally built in 1894, the bridge is named for the Meem family who owned the Strathmore Estate west of the Shenandoah River where the bridge resides.

At 204 feet in length, Meems Bottom Bridge is the longest covered bridge in Virginia, and the only one that is still open to vehicular traffic. The construction of Meems Bottom Bridge is based on Burr Arch Truss—a design principle in which the arch bears the entire load of the bridge and the truss keeps the bridge rigid. The strength of this design has enabled the bridge to remain in use for more than 120 years.

However, the bridge has certainly seen its challenges over the years. Vandals set fire to it on Halloween in 1976—it was reconstructed after salvaging the original timbers. The bridge has also been damaged by oversized tractor trailers trying to squeeze through its limited clearance. VDOT has closed the bridge on several occasions to make necessary repairs. Shenandoah County is working with VDOT to find a solution and warn tractor trailers and oversized vehicles before it’s too late.

With its adjacent farmland and nearby picnic tables, Meems Bottom Bridge is a popular spot for visitors, especially those seeking a picturesque picnic spot. The bridge also offers public river access to those looking to float the Shenandoah.

“There are several other attractions located near Meems Bottom Bridge,” said Jenna French, director of tourism and economic development for Shenandoah County. “Bridgemont Farms is located on the property adjacent to the bridge itself. Shenandoah Caverns, Route 11 Potato Chips, Bryce Resort and several local vineyards are nearby. For history fans, the Virginia Museum of the Civil War is also a short drive in the neighboring town of New Market.” 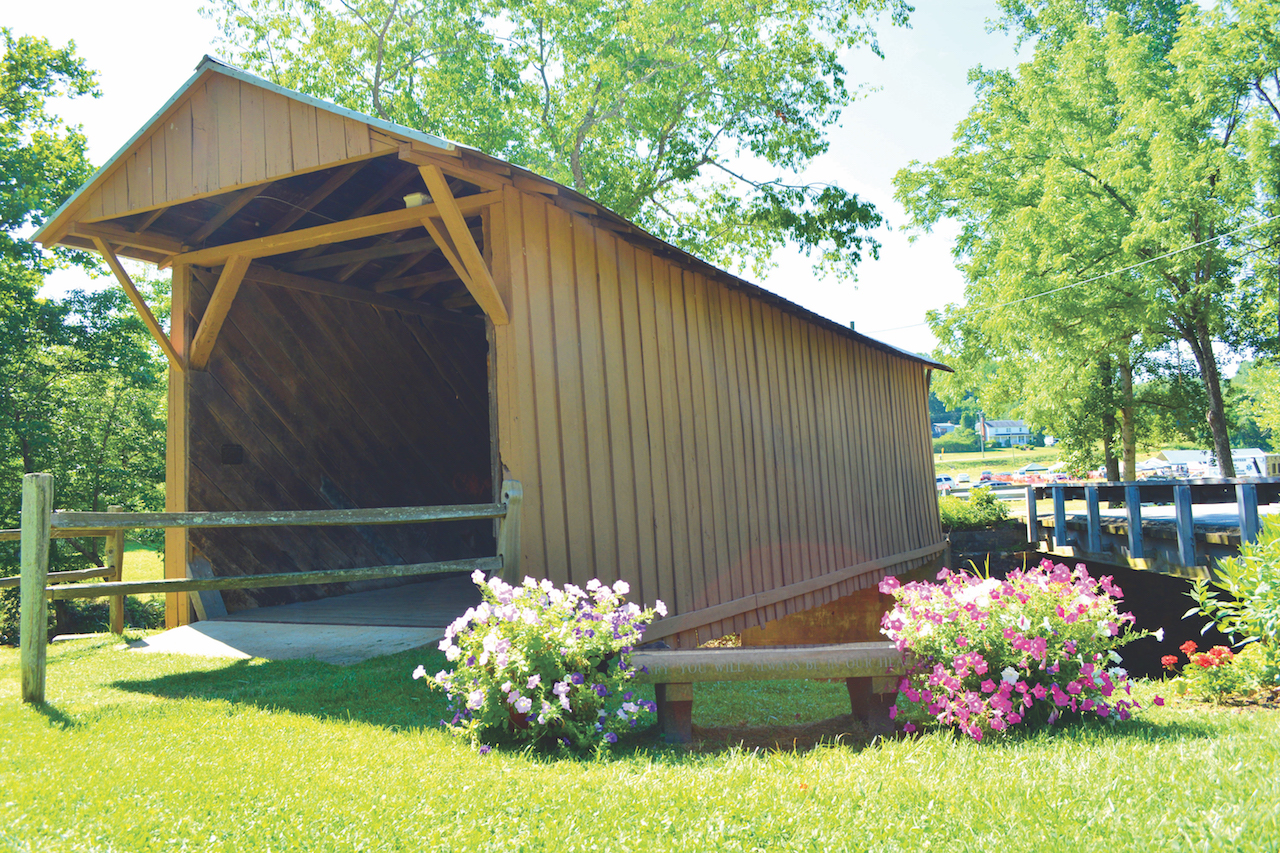 Patrick County is home to the 48-foot oak construction Jack’s Creek Covered Bridge, also known as the Woolwine Bridge. It was built in 1914 by Charles Vaughan and designed by Walter Weaver. The Patrick County government owns and maintains the bridge which is located on Jack’s Creek Road off State Route 8 just south of the community of Woolwine.

Open to pedestrians, Woolwine Bridge is nestled in the natural beauty of Virginia’s piedmont region. Visitors can sign the guest book located inside the bridge and enjoy the peaceful setting overlooking the Smith River.

The bridge is listed in the National Register of Historic Places and hosts the Covered Bridge Festival in June every year. The festival includes horse-drawn wagon rides, crafts, live music, food vendors and entertainment.

“Patrick County has a lot to offer,” said Tourism Director Sandra Belcher. “Fairy Stone State Park is close by with cabins and camping sites with tons of hiking, fishing, swimming and boating. Or you can stay, dine and enjoy the sights at the five-star Primland Resort. Plus, Villa Appalacia and Stanburn are excellent local wineries.” 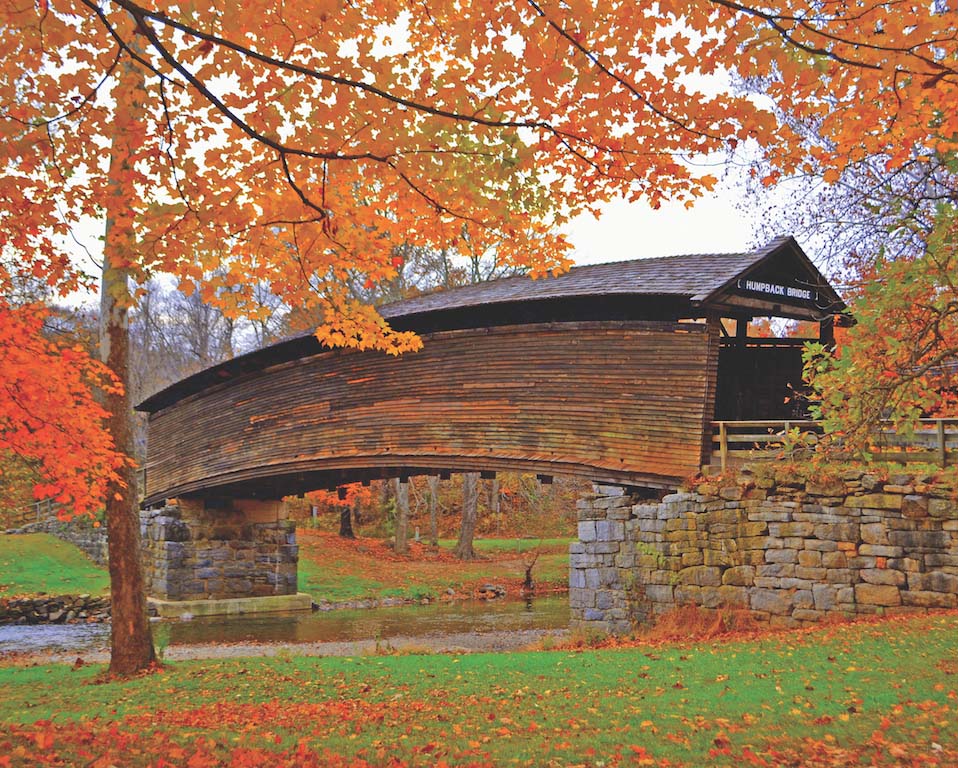 Humpback Bridge is one of the oldest remaining covered bridges of its kind in the United States and the only covered bridge remaining in Allegheny County. Constructed in 1857, the design of the bridge is arched and covered—hence the name “humpback.” This nearly 110-foot structure spans a tributary of the Jackson River known as Dunlap Creek. The humpback feature is four feet higher in the center than at either end.

The bridge was used for vehicular traffic until 1929 when a steel truss bridge was constructed immediately north on Route 60. Humpback Bridge was abandoned, and local farmers began storing hay bales inside of it. In 1953, the Covington Business and Professional Women’s Club, the Virginia Department of Transportation and area residents rallied together to restore the bridge.

Now a cherished landmark, the bridge is listed in the National Register of Historic Places and is designated a National Historic Landmark. Residents and visitors alike gather at the bridge for picnics, photos or simply to admire its beauty and craftsmanship. Humpback Bridge is also one of 16 sites across Virginia to display a giant LOVEwork sculpture.

“Fans of covered bridges come from all over the country to admire the historic Humpback Bridge,” said Teresa Hammond, executive director of the Allegheny Highlands Chamber of Commerce and Tourism. “It has been lovingly preserved and is now part of a five-acre wayside park, easily accessible from I-64 at Exit 10—follow Route 60 east for 1 mile.”

While you’re in Allegheny, visit Clifton Forge and Covington for locally owned shops and restaurants. Visitors also enjoy nearby sites such as Douthat State Park, Falling Spring Falls, the C&O Heritage Center, the Historic Masonic Theatre, the Allegheny Highlands Arts & Crafts Center, the Clifton Forge School of the Arts, the historic Allegheny County Courthouse and the 701 Engine in Downtown Covington. The iconic Homestead Resort is about 40 minutes away in Hot Springs.