Virginia Rosés to Sip and Serve this Summer

The Popularity of Rosé is Rising, and Virginia Wineries are Ready for Consumers to Drink Pink with the 2017 Vintage

“A wonderful vintage all around.” This is how noted winegrower Jeff White, founder of Glen Manor Vineyards in Front Royal, describes the 2017 Virginia vintage.

With sunny, dry days throughout the growing season and little to no rain during harvest, winegrowers across the commonwealth echo White’s sentiments about the last year.

“The 2017 vintage was a really enjoyable growing year,” says Emily Pelton, winemaker at Veritas Vineyards & Winery in Afton. “We had 40 days of no rain in the middle of red ripening and therefore have a vintage that is full of ripe red fruit and high in aromatic intensity.”

Local oenophiles in search of a true taste of the exceptional 2017 vintage will have to wait another 10 to 18 months before most wineries release their Chardonnays, bigger reds like Petit Verdot and Bordeaux-style blends.

In the meantime, winemakers began releasing lighter whites and rosés in late February. Though rosé is generally not a good indicator of vintage quality, consumers can’t get enough of the pink juice.

“Our rosé sales have grown 250 percent over the last five years,” says Michael Kimball, vice president of marketing at The Williamsburg Winery. “Rosé is very popular nationwide, and in our case, it’s the perfect wine pairing for so many of the flavors of Coastal Virginia such as rockfish, oysters, crab and Edwards Ham.”

Consumers have traded the sweet White Zinfandels popularized in the 1980s for dry, crisp, refreshing rosés.

“Rosé is trendy and no longer considered tacky,” notes Matthieu Finot, winemaker at Crozet-based King Family Vineyards. “To keep up with demand in the tasting room and wholesale, we have more than doubled production of Crosé [rosé] in the last three years. We made 1,500 cases of Crosé in 2016 [made from the 2015 vintage], 2,000 cases last year and we bottled 3,300 cases this year [2018].”

Wineries throughout the commonwealth are experiencing similar significant increases in demand. Though rosé sales are not tracked independent of overall wine sales, in a recent poll of three dozen winemakers, all but one produced more rosé this year than last year to meet demand.

The following is a field guide for popular 2017 rosés including release dates, prices, production methods and notes from winemakers.

Any red wine grape can be used to make rosé and can span the spectrum of color, flavor intensity, and taste.  Merlot and Cabernet Franc are the two most common varieties used by Virginia winemakers to make rosé.

Not all rosés are created equally—literally. There are three methods of making the wine: direct press or maceration method, saignée and blending method.

Direct press, maceration, intentional rosé, true rosé. These are all terms used to describe rosé made from fruit that is grown, harvested and fermented with the intention of making a pink-hued wine. With the direct press method, or maceration, juice from the pressed grapes sits on the skins for a couple hours up to a couple days (sometimes longer), drawing out color and flavor. The longer the juice sits on the skins, the darker the hue of the resulting wine. After this brief time on the skins, the juice is racked off to ferment and eventually be bottled.

Rosés made from the saignée (from the French verb ‘to bleed’) method are a byproduct of red wine production. After the red grapes are harvested and pressed, a small amount of the juice is ‘bled off’ from the must (juice, skins, seeds, stems) in order to concentrate the color and flavor of the remaining red wine. The bled off juice is then vinified separately as a rosé wine. Rosés made via the saignée method tend to be richer than other methods.

Not common in Virginia, the blending method is the process of adding, or blending, a small amount of red wine juice to a white wine to make a rosé.

Virginia Rosés to Sip on this Season

2017 Morales Rose. Named for José Morales and his family, who have worked alongside Jeff White and his family since the establishment of Glen Manor Vineyards.

Method: A 50/50 blend of saignée and intentional

Michael Kimball, vice president of marketing at The Williamsburg Winery, says, “This [2017] rosé is more Provence in style than in previous vintages and is made from 100 percent estate-grown fruit from our Wessex Hundred vineyard here in Williamsburg.”

“For many years our rosé was made from 100 percent Cab Franc that was intentionally grown, picked and fermented for rosé, but last year we added Pinot Noir since we didn’t make a sparkling wine last year [Afton sparkling is made every other year.],” says Elizabeth Smith, owner of Afton Mountain Vineyards. “Even with having more rosé last year with the addition of the Pinot, we still sold out sooner than we would’ve preferred so we added Merlot from our estate vineyard this year and are really pleased with the fruitiness it adds and having more wine for our customers.”

Method: Direct press. Each of the grapes were grown specifically for this rosé, and each is fermented separately. 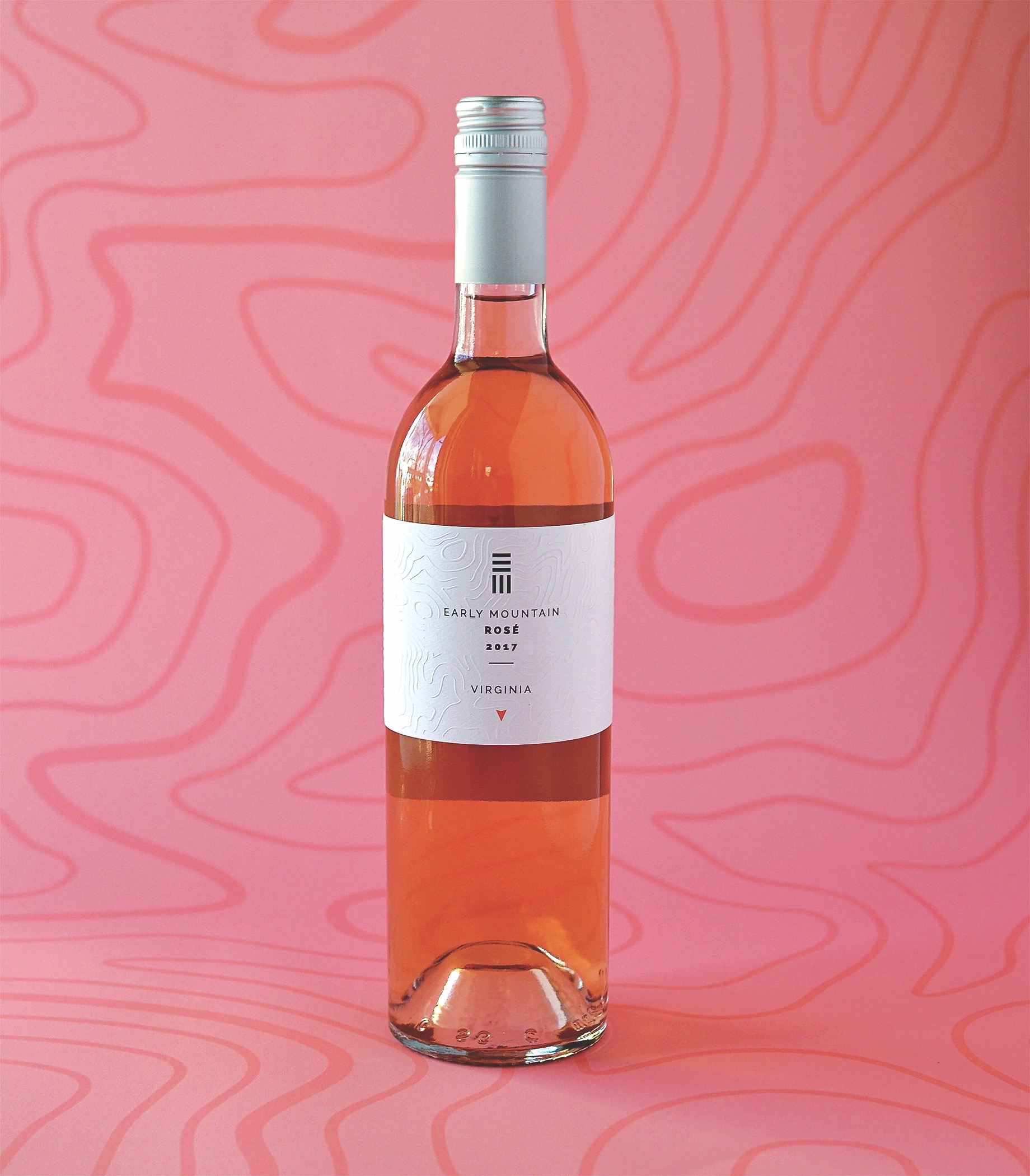 Winemaker Ben Jordan says, “2017 was an excellent vintage for rosé. We had ripe flavors at moderate alcohol levels with near perfect acidity. The colors are better this year, as everything has had lower pH levels, so we have more pink than orange hues.”

Grapes: Blend of Merlot, Syrah, with splash of Malbec and Cabernet Franc

Method: The grapes for this rosé are grown specifically to make rosé, with about 1.5 percent juice from saignée. 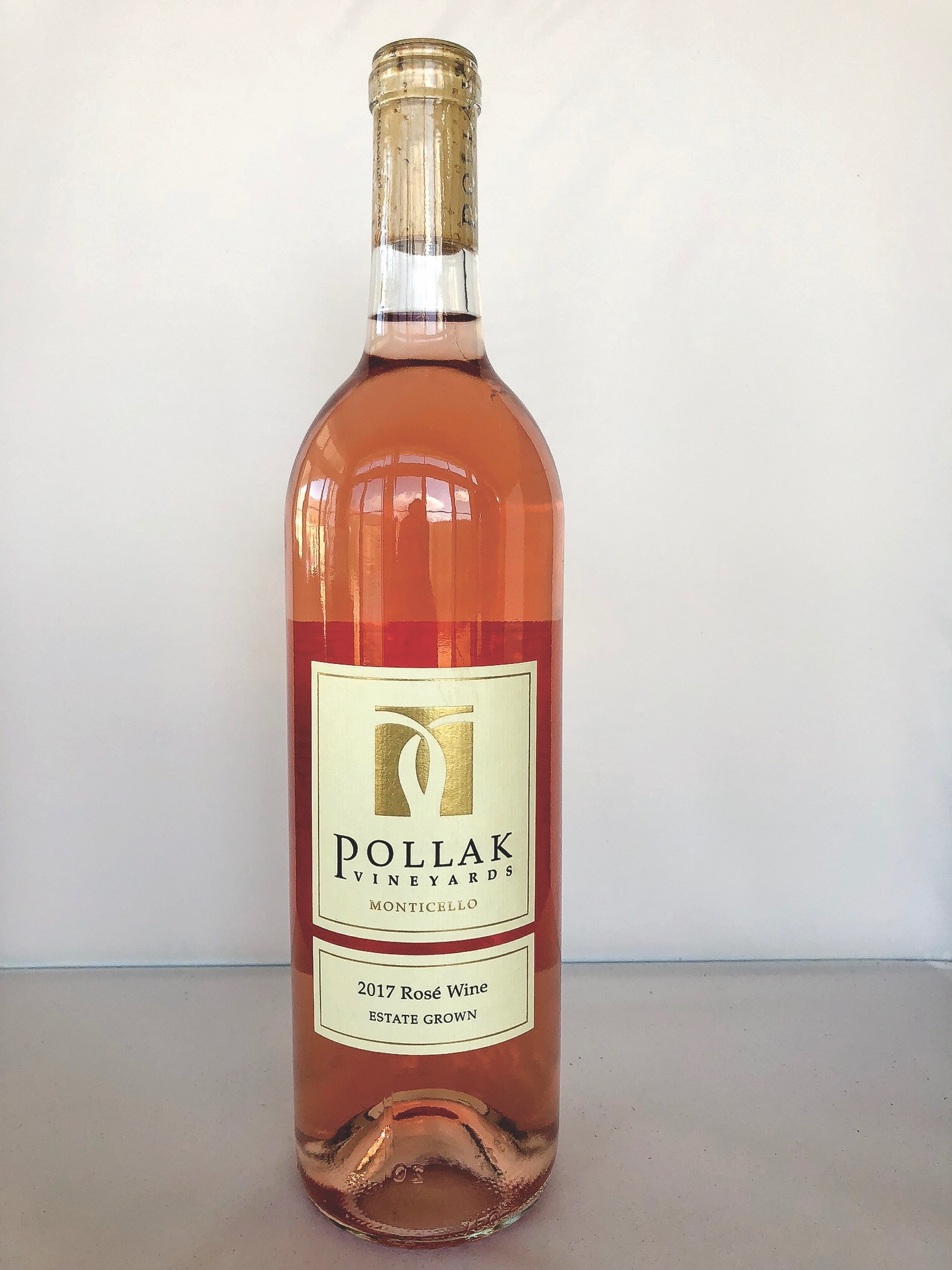 Winemaker Benoit Pineau says of the 2017 vintage, “We had record low in rainfall (just 29 inches), which means better acids. Great news for our rosé and other wines!”

Loving Cup’s vineyard is the first in Virginia to achieve organic certification. The Loving Cup rosé, ‘Dudley Nose’ Rosé, is named for the lack of pigmentation in the noses of some dogs (most often it is pink). The Hambsch family, who founded Loving Cup, donates a portion of proceeds from sales of Dudley Nose rosé to the Almost Home Pet Adoption Center, a no-kill shelter in Nelson County that rescues and finds homes for nearly 1,000 cats and dogs each year.

Method: The Marquette is whole-cluster-pressed. The Corot Noir is bled juice.

Casanel’s José Rose is named for their vineyard foreman José, who is from Pueblo, Mexico. The wine is released to coincide with Cinco de Mayo.

Rappahannock Cellars produced three rosés from the 2017 vintage. “The 2017 vintage was great for Virginia across the board,” says winemaker Theo Smith. “Our fruit came in with great acidity and balanced flavors. The weather cooperated and enabled us to pick fruit at optimal ripeness; one of the best vintages we have had in a long time.” 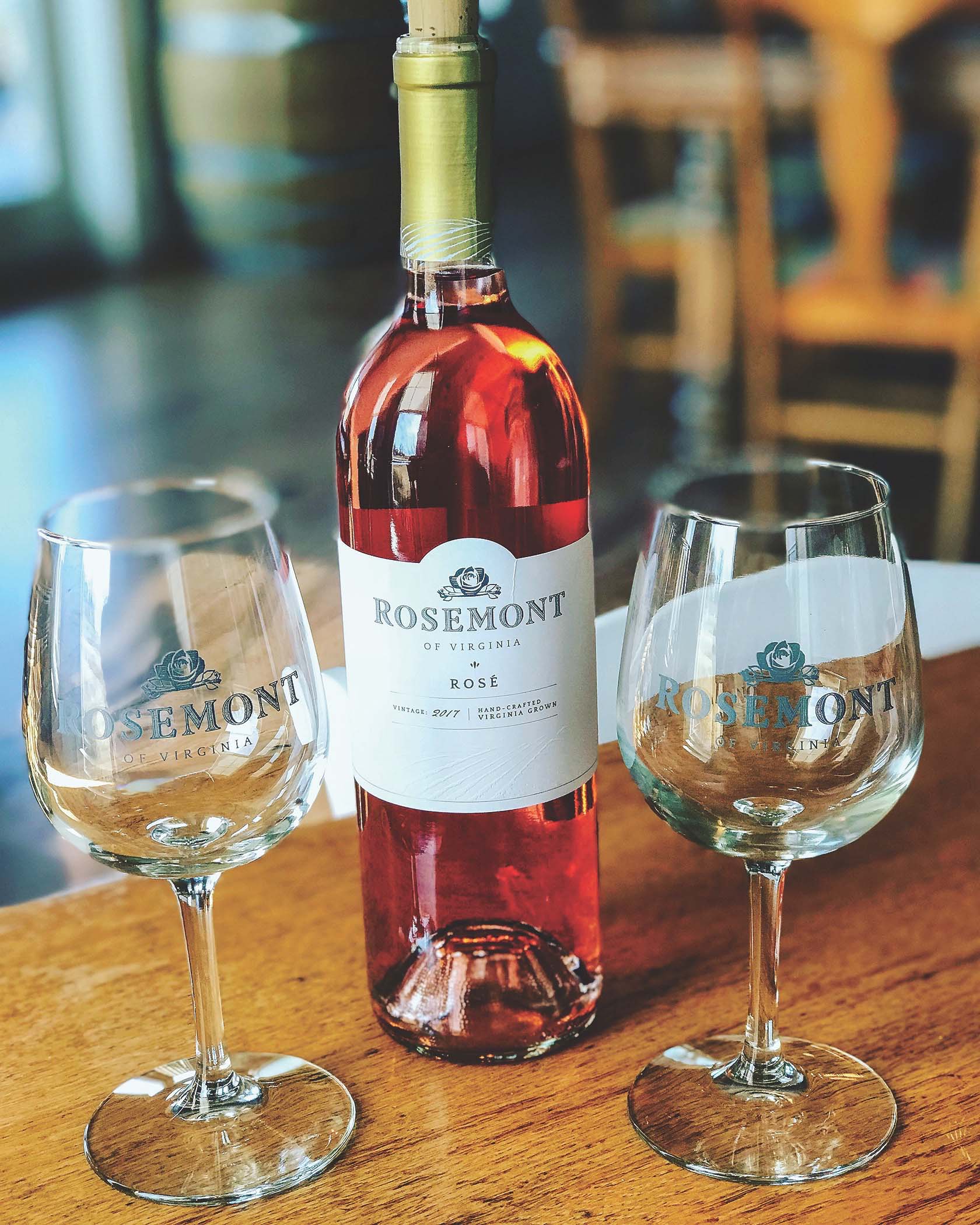 “We pick Chambourcin early for the specific purpose of making a straight varietal rosé,” says Aubrey rosé, Rosemont of Virginia director of sales and marketing. “It’s our favorite way to drink Chambourcin, although the Sparkling rosé that we’ll release later this year could change that.” 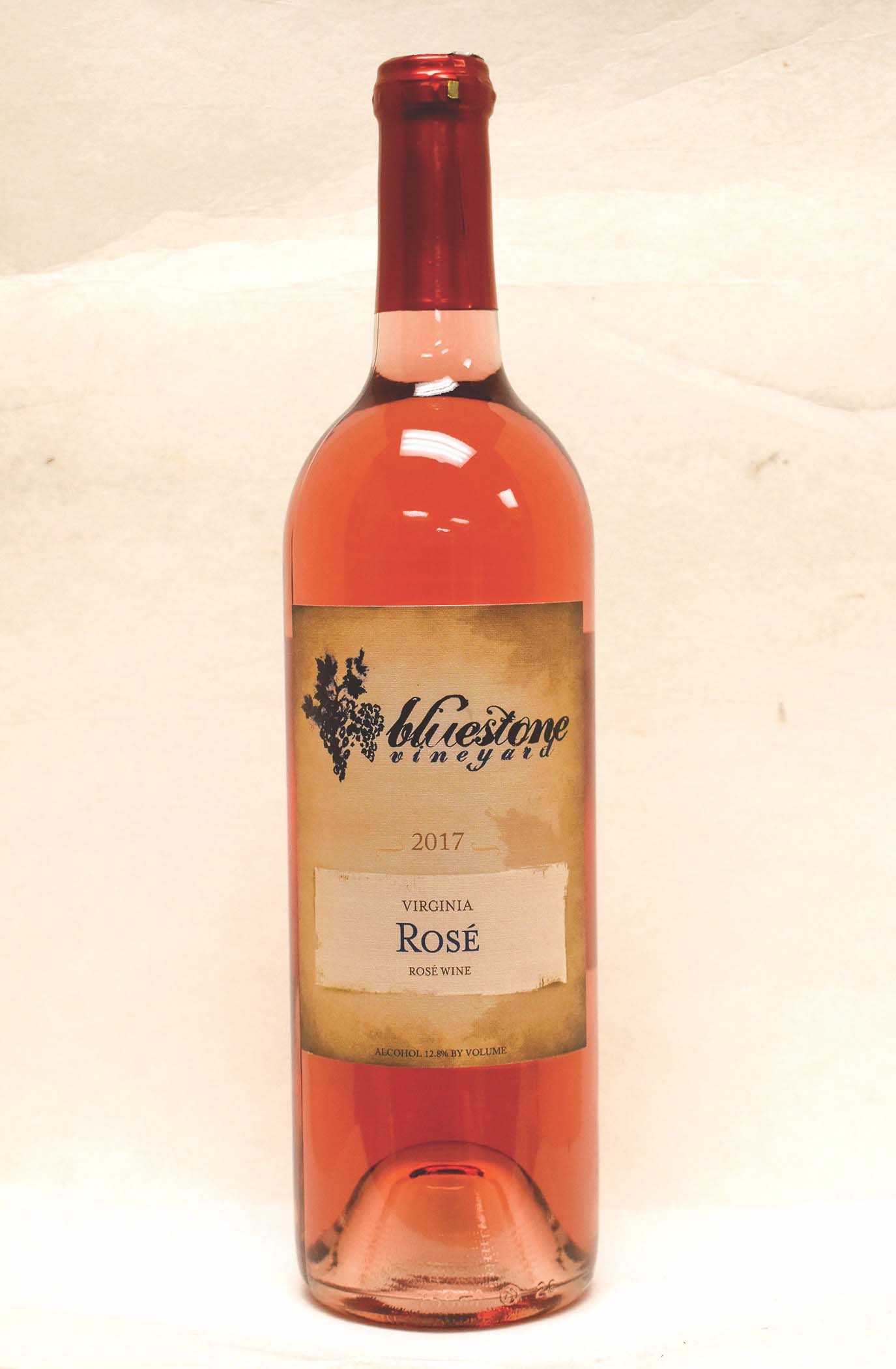 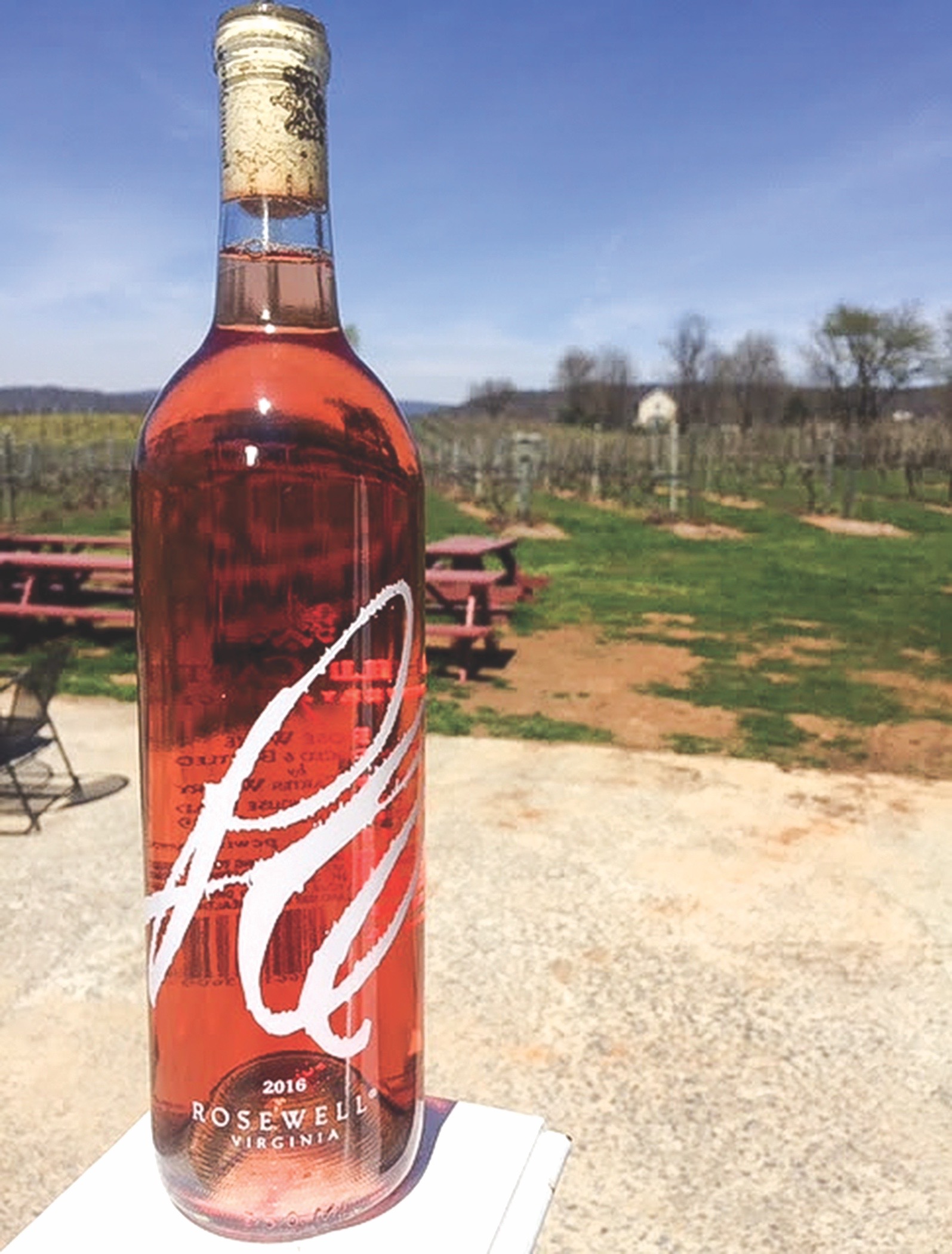 2017 Rosewell Rosé. This rosé is named for the ruins of the historic Rosewell mansion built in the early 18th century in Gloucester County. A fire gutted the historic mansion in 1916, leaving only the outer brick walls, but it is still a popular attraction for history enthusiaststs

Root Cellar Bottle Club Returns to The Market at Grelen