RAISE A GLASS TO THESE FOUR HANDCRAFTED DRINK RECIPES, EACH REPRESENTING A POPULAR PART OF TOWN

What better way to celebrate the start of a new (and hopefully, improved) year than with a few creative cocktails?

Today, we take you to the greater Lynchburg region, which is home to some fabulous, forward-thinking bartenders who take their boozy concoctions seriously. We asked bartenders from four local restaurants, in four different greater Lynchburg neighborhoods, to share a celebratory toast that embodies their neck of the woods.

From smoked ice (yes, you heard that right) to a wine-infused simple syrup, they pulled out all the stops for the recipes below. 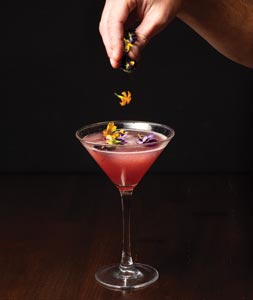 METHOD
Combine ingredients, shake, and strain, preferably into a
martini glass, and garnish
with edible flowers.

The Purple Stiletto is a classic cocktail with a modern twist, very similar to the historic-meets-trendy vibe the Downtown Lynchburg area is proud of. The flavor is nicely balanced—not too sweet, not too sour—which will make you want to enjoy this one again and again.

The Purple Stiletto reflects the history of Shoemakers and specifically the Craddock Terry Hotel as one of the largest shoe manufacturers in the world at one time. The Craddock Terry Hotel building turned out 2,100 pairs of women’s shoes per day. The hotel complex, including the King Building, which houses Shoemakers and Waterstone Pizza, was an early example of urban revitalization in Lynchburg and kicked off the revival of Downtown Lynchburg. 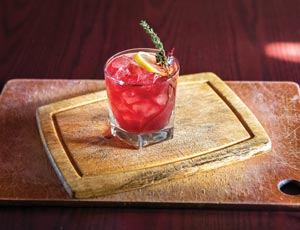 Country Cabernet Club
Crafted by Zac Stinson at Benjamin’s Restaurant
Not available for order. (Unless Zac gets flooded with requests, he says.)
Make this one at home!

METHOD
Combine wine and brown sugar in a saucepan and simmer until thickened. Shake all ingredients over ice. Strain into glass and garnish with cherry, lemon and thyme. Lemon juice amounts can be adjusted for preference.

Cool and refreshing, with a hint of natural sweetness, the Country Cabernet Club reminds us a little bit of a boozy Southern lemonade.

Although Forest is one of the region’s “newer” neighborhoods in terms of development, history is not lacking in this picturesque part of town that always has the Peaks of Otter in the background. The homemade cabernet simple syrup pays homage to Thomas Jefferson, Founding Father and wine enthusiast, and his Poplar Forest retreat home nearby. Some Forest folks are more “country” (think hunting and hiking); others are more “country club” (think elaborate fire pits and golf). Wherever they fall on the recreational spectrum, this drink has a broad appeal for many palates. 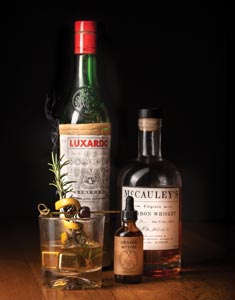 Tobacco & Iron
Crafted by Cliff Olds at The Dahlia
Not available for order.
Make this one at home!

METHOD
Begin by smoking ice in oven-proof container in a preheated smoker set at 275 degrees for
1 hour. (Even though ice will melt, smoke adheres better to a colder surface.) Cherrywood wood chips are preferable. Chill and then strain to remove ash. Take 1/2 cup chilled smoked water and 1/2 cup sugar and boil gently until all sugar is dissolved. Chill before adding
to cocktail.

In a glass, add whiskey, cherry liqueur, homemade simple syrup and dash of bitters. Stir lightly. Add pre-chilled steel cubes so as not to water down the cocktail. Garnish with a torched orange rind twist and rosemary.

Tobacco & Iron has a lot going on—in a good way. One sip and your taste buds take in the refinement of this elevated take on a classic old fashioned with a mellow—yet mysterious—finish.

Tobacco and iron were the primary products of early Lynchburg, in the days of founder John Lynch, when the ferry system was in full swing. The trade of these goods through the years helped lay a strong financial foundation for many of the families that later relocated to the up-and-coming “suburbs” of Rivermont Avenue in the late 19th century, creating some of the beautiful, classic older homes located in this area. Even the garnishment of this drink pulls from its surroundings, representing the unique and sophisticated architecture found in the Boonsboro neighborhood. 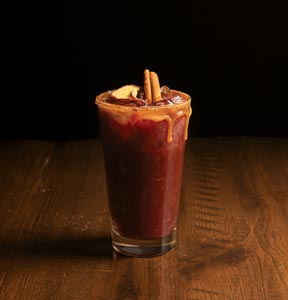 In a glass or cocktail shaker, combine all ingredients with ice, and shake thoroughly. Rim a glass in caramel, and dip in cinnamon sugar. Add ice to the rimmed glass, strain the cocktail into the glass and add a couple of splashes of club soda.

Drinking the Candy Apple Sangria is equivalent to bobbing for caramel-covered apples in a tub of wine. It’s a cozy cocktail for fall and winter but also sweet and refreshing enough to transition to the warmer months.

What we are calling the Timberlake Road side of town is broad and more loosely defined—stretching across the west side of Lynchburg along Timberlake Road and encompassing a host of smaller communities such as Cornerstone, where this drink originated. Like this playful sangria, the Timberlake Road region has a youthful ambiance—from the college students in Cornerstone to younger families with children in various neighborhoods. Not to mention you’ll find plenty of people playing on the water in the Timberlake community during the summer.

Sly As A (Copper) Fox