Peruse the menu of Strangeways Brewing’s Dabney Road location and the moniker quickly becomes clear: Beers are fantastically experimental, catering to those that like their brews served with a hardy side of weird.

“We get a clean base from Pilsen and acidulated malts, and [spontaneous fermentation techniques], then add a little bitterness with Huell Melon and Sorachi Ace hops,” says owner-founder Neil Burton. Namesake flavors come from juniper berries marinated in gin. A puree of Persian limes and cucumbers brings minty tang and remarkable balance.

The results are refreshing and wildly unique. The beverage sips like a cocktail. Each taste feels exciting—like you’re experiencing some new breed of barrel-aged mutation aimed at carving a niche among the pantheon of spirits.

The beer is one of more than 36 house varieties on-tap. Beyond an obligatory—but deliciously user-friendly—Munich-style lager, the Helles Frozen Over, most are just as interesting. Menus read like a research and development project dreamed up by the father of Richmond beer innovation, Mekong’s An Bui. 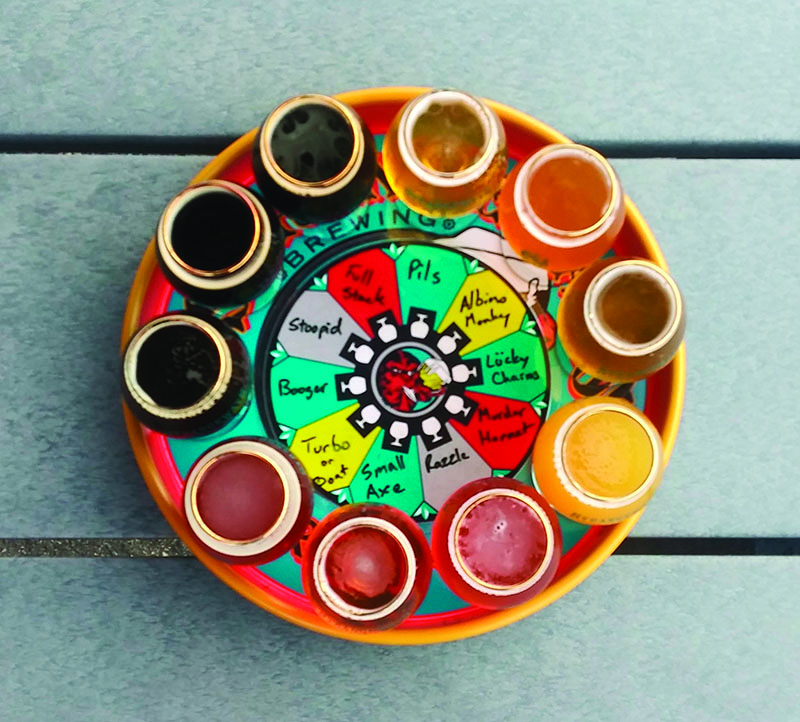 “This is a sweet stout conditioned with pure Wisconsin Little Man maple syrup and thick-cut Smithfield bacon,” says Burton. The result is a luscious, dark, rich concoction that tastes like chocolatey, syrupy pancakes and, somehow, breakfasting in a mountain cabin amid a spruce-fir forest. Clocking in at 8 percent alcohol by volume, it’s also surprisingly strong.

“It’s not for nothing we call this location our ‘laboratory,’” says Hiller with a laugh, referring to the 8,400-square-foot Dabney Road production facility. There, tasting room experiences forego flagship fleets in favor of variety and experimentation. Upward of a dozen small-batch brews rotate in and out weekly. Self-described Mad Brewers, Hiller and Burton essentially bet the farm on exploring the outer boundaries of possibility. And it worked.

“From the beginning, we modeled our business around doing the opposite of what you might call the typical approach to brewing,” says Burton. He and Hiller launched Strangeways in 2013 with the goal of challenging themselves and dramatically expanding the palate of Virginia’s craft beer scene. The strategy won them a cult-like following among adventurous beer lovers and endorsements from industry titans like Bui and Legend Brewing Co. brewmaster, John Wampler.

“What they were doing was unprecedented in the state,” says Josh Chapman, brewer-owner of Chincoteague’s Black Narrows Brewing Company, whose work with oyster yeasts recently garnered national attention. Among other things, Burton and Hiller were instrumental in introducing drinkers to the tastes of Old-World techniques like bottle and open fermentation. They took things a step further, using foraged yeasts from vegetables, fruits and flowers—including candy roaster squash, honeysuckle, mulberries, heirloom apple blossoms and more.

Dise compares working with the untamed fungi to a controlled, somewhat alchemical experiment—and emphasizes the word experiment. Each time you brew with these yeasts, you get something a little different than before, he says. Brewers essentially prepare materials in huge wooden vats, add yeast, and wait to see what happens. The blessing and curse of the method is that it makes standardizing beers essentially impossible. 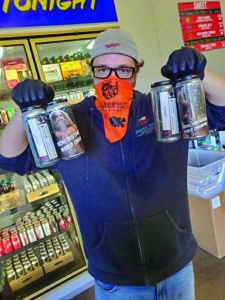 “You can use all the same ingredients and get pretty close to the same results, but every batch is its own definitive thing,” says Dise. But for adventurous brewers that are willing to put in the time and effort to master the odd and finicky techniques, rewards can be profound.

These beers are inherently unique, which makes them perfect for a boutique operation like ours, says Dise. Indeed, the uniqueness of beverages is unparalleled. When it comes to wild yeast beers, the spectrum of tastes and colors runs the gamut. Drinkers can expect everything from aged cheese bitterness, to citrusy tang, to melon-esque sweetness, to lemony tartness and more. And the beers are pretty to look at too.

Fleets, for instance, offer color palettes as interesting as those you’ll find at a vineyard: You get everything from rosette pinks, to rich, cabernet sauvignon-like violets, to hazy, decadent yellows that look like a hefeweizen made a baby with a crisp and delicate chardonnay.

Burton and Hiller’s pioneering work in the field paved the way for Chapman and Dise.

“They rewrote the book on experimenting for the East Coast and introduced drinkers to a whole ‘nuther world of possibilities,” says Chapman. “Before Strangeways, you’d be hard pressed to find sour beers on taproom menus. Now, they’re everywhere.”

The success of Strangeways’ Dabney Road tasting room spawned expansions to Fredericksburg in 2017 and Richmond’s Scott’s Addition in 2019. In lieu of the ongoing pandemic, each is offering online ordering, curbside pickup and additional outdoor seating. Also, commemorative glasses that read “COVID-19 SUX.”

It’s our way of saying, ‘This too shall pass,’ says Burton. “We’re gonna come out the other side of this thing doing what we’ve always done, which is to relentlessly pursue innovation and push the boundaries of everything we think beer can be.”