Murals are hot. And they have been for several years, both in small towns and big cities across Virginia, the United States and the globe. Mural fests have taken their places on cultural calendars as highly anticipated events, often infusing a targeted area with a profusion of murals during a concentrated timeframe. But individually commissioned murals are playing a significant role as well.

The commonly held belief is that muralism improves the urban landscape. Murals add personality and character to a city or town, even helping to define neighborhoods and development areas. This form of public art celebrates the identity of a business or an area, building attachment, cultivating a sense of pride and belonging and, nowadays, creating an Instagrammable destination.

Murals are conversation catalysts, sometimes around tough issues, and contribute to a more welcoming vibe for locals and visitors, alike. In fact, as regional landmarks and place makers, this form of street art attracts people which leads to more energized and activated communities and stronger businesses, especially those that depend on foot traffic.

Murals not only provide artists with work, but they move art out of museums and galleries and into the streets, while contributing to the brands of businesses and locales. Most murals are not just architecturally integrated eye-candy. If you look beyond the surface, these monumental wall paintings are the embodiment of business owners’ core values or the spirit of an entire town or region.

Here we showcase four from Virginia Beach to Roanoke that talk their talk from the walls of food and beverage establishments. 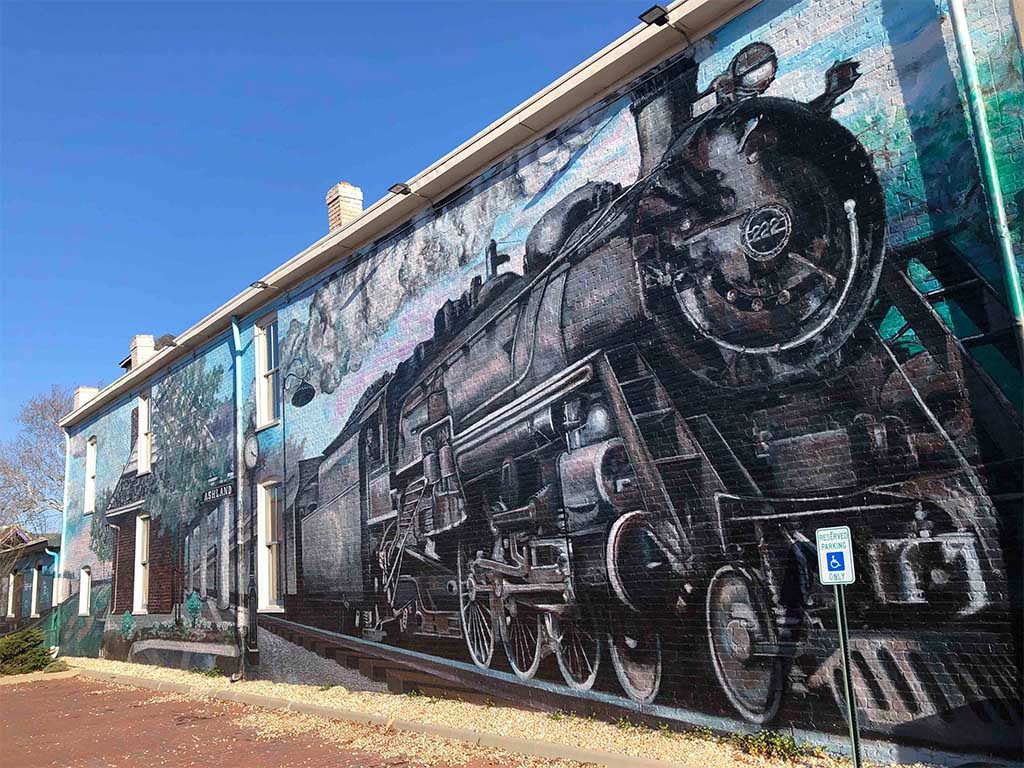 What began its life in 1997 as a wine, craft beer and cheese market expanded in 2015 to include a small, seasonal farm-to-table café, sourcing ingredients from local producers and family farms as much as possible. Set on the railroad tracks of historic downtown Ashland, The Caboose’s location made its exposed side wall a prime canvas.

Beginning in the 1840s, railroading built the quaint Victorian town of Ashland, which is home today to an Amtrak station, tracks that still bisect the main drag and a 24-7 railroad webcam for locomotive lovers. The late Art McKinney was one of those lovers. Before his death at the age of 72, the beloved engineer and philanthropist had shared with friends like Hank Lowry his idea for a train mural on a building he owned which houses The Caboose.

Posthumously, Lowry and Ashland Street Parties, Inc., a nonprofit he helped launch, contacted celebrated Richmond muralist Ed Trask. He, in turn, enlisted the help of Caesar, his good friend and fellow artist. After “tons of drawings, ideas and fundraisers,” the artists, in collaboration with donors and other friends who grabbed a brush, made the 100-foot mural a reality.

As Trask describes, the mural features a steam locomotive that transforms into a more modern train as it comes around the bend. Graffiti on the boxcars are the names of donors. Conducted by none other than McKinney himself, the mural is a tribute to a past way of life and to lost friends. In one area, the ashes of a townsperson’s loved one are mixed into the paint. The train’s number, “222,” refers to the lucky numbers of a man named Travis, a now deceased train buff who grew up outside of Ashland. Trask reflects that, in addition to these smaller stories and storylines, the mural has become something larger than itself: a metaphor for the identity of Ashland as a small southern town facing encroaching modernity. 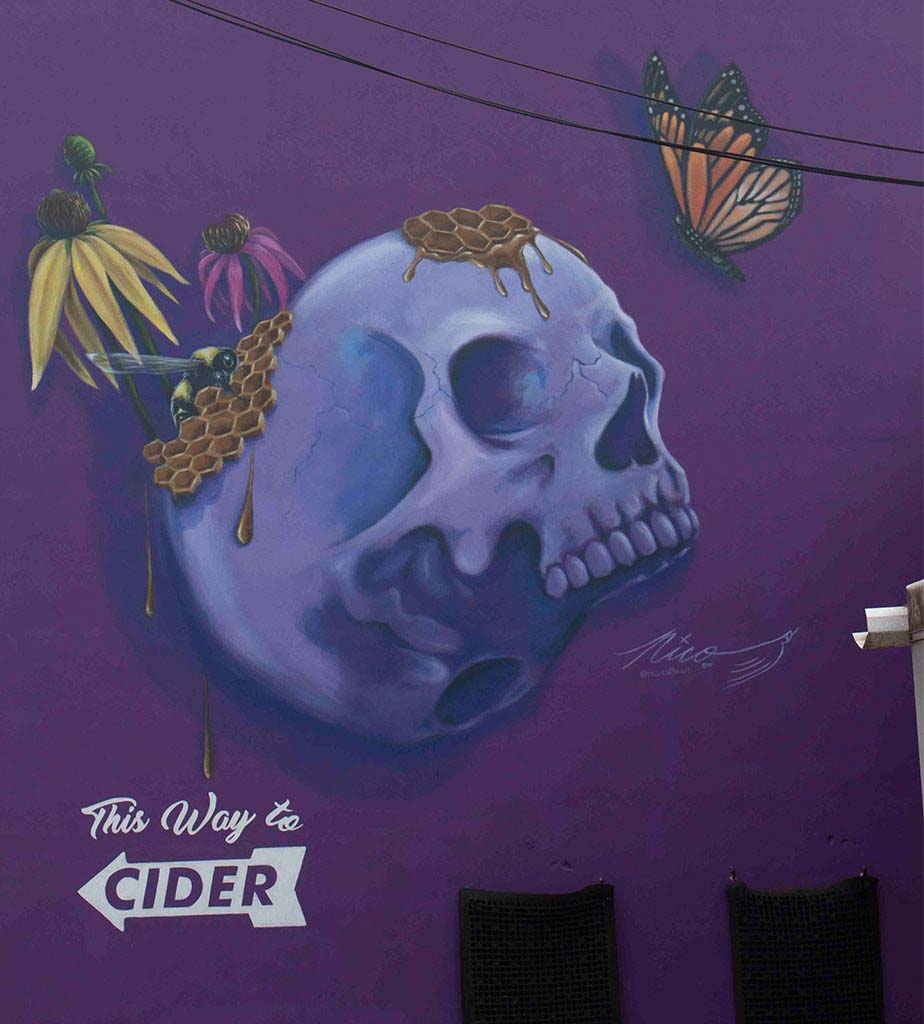 What happens when a teacher and a chef—both single parents—meet, fall in love and move their blended family from California’s Central Coast to Virginia? Why they buy a farm in Goochland, plant an apple orchard and open a cidery, of course. Since 2016, Liza Fierro-Cioffi and Eric’s Cioffi’s happily ever after has included barrel-fermented cider with little to no preservatives. Their motto? “We embrace the funk!” And they also embrace everything holistic, organic, sustainable and healthy, simultaneously nurturing the land and community connections.

Their can’t-miss-it purple building is graced by a mural, one of a series of artworks both inside and outside the cidery. According to artist Nico Cathcart, the paintings highlight Courthouse Creek Cider’s “dedication to natural products and sustainability while provoking conversation among their customers and community.” When the project began, a unique and eye-catching mural that reflected the couple’s core values was what they sought. Cathcart recalls that “focusing on pollinators came almost instantly.”

“Focusing on bees was a given,” considering that her body of non-commercial work “talks about the symbiotic relationship between humans and our environment” and that the Cioffis steward an urban hive in the wall adjacent to the mural. Her painting integrates a skull covered in honey with butterflies and botanicals found in the orchard. As such, it is the perfect embodiment of hers, Liza’s and Eric’s “deep love for the environment, the recent plight of the monarch butterflies’ habitat destruction and the sudden colony collapse syndrome.” 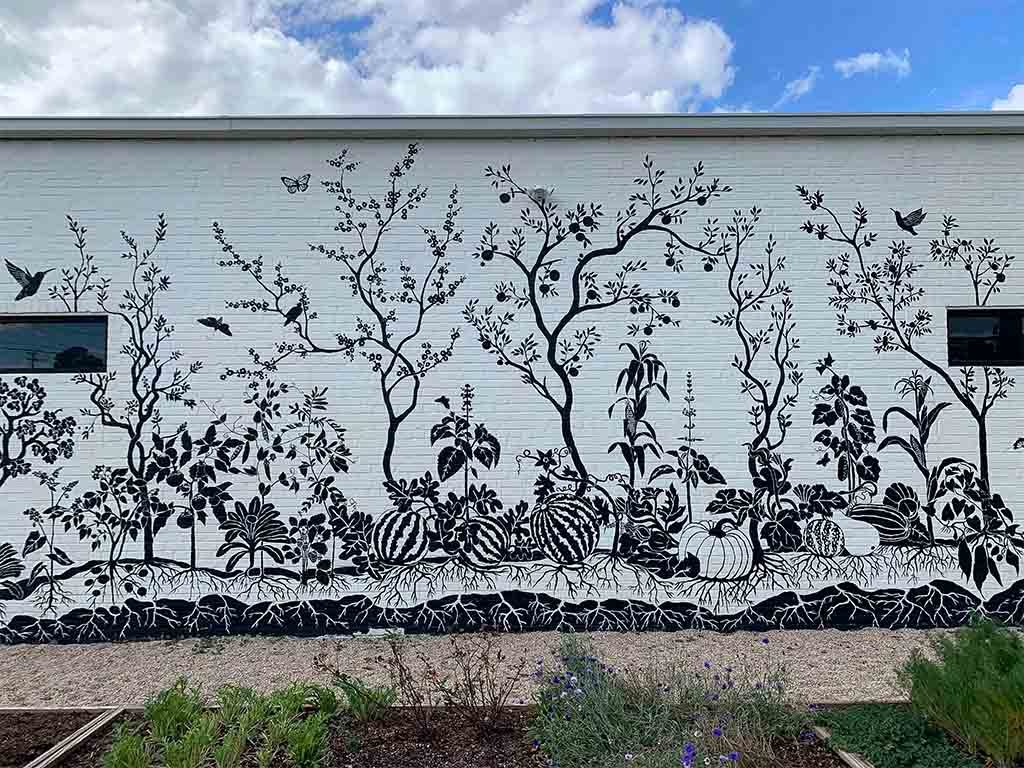 Birthed in 2018, Prosperity Kitchen & Pantry is the Virginia Beach-based breadchild of Commune owner, Kevin Jamison, and his original head baker, Ishiah White, both artists. Jamison only admits to dabbling, while White teaches at the Governor’s School for the Arts in Norfolk.

This small batch, from-scratch operation supplies all the baked goods for the two locations of Commune. At nights, it transitions into a neighborhood pizza place. The name, Prosperity, is meant to encompass not only the goal for their business—successful, flourishing, thriving—but for their team members and the community.
This fecundity now sprouts from the very walls. Participation in the 2019 ViBe Mural Fest resulted in a partnership between Jamison, White and artist Naomi McCavitt, of whose work they had long been fans. But Jamison confesses to being “a little nervous” that their three distinct artistic minds might never meet. Alas, he didn’t need to worry. As the collaboration took root, the concept of a cycle of growth began to emerge.

A visit to Jamison’s all-natural, chemical-free New Earth Farm in Pungo—which was, as he recalls, “bursting” with examples of “regeneration”—resulted in McCavitt picking vegetables, eating them, drawing them and, ultimately, incorporating them into her delicate Chinoiserie-influenced botanical design painted in black on the pearl white building. Today an actual garden has been planted in front of the mural and seems to sprout from common ground. 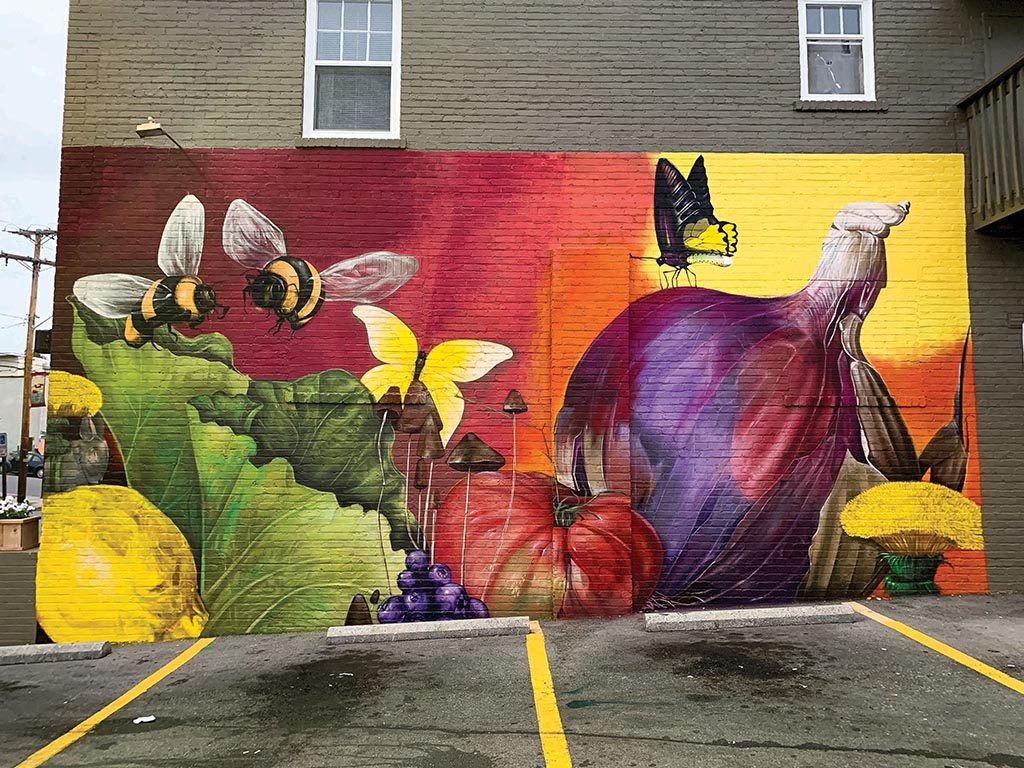 Listed on the National Register of Historic Places, Grandin Village is known as an eclectic, family-friendly urban village a couple of miles from downtown Roanoke. It is also home to well-known artist and muralist Toobz Muir, who was invited by Rockfish Food and Wine owner, Joe Porfert, to create a mural. That mural became two.

Grandin is a hip little neighborhood known for independently-owned shops, restaurants, markets and the Roanoke Co+op. This vibe, which includes denizens who Toobz describes as “health-conscious,” inspired his still life concept for the mural. Based on vintage illustrations of fruits and vegetables—“how our food used to look”—it includes a rabbit and pollinators like butterflies and bees. 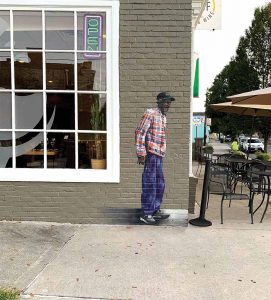 But this is a neighborhood that also honors its residents who foster diversity and a sense of community—people like the late James Tarpley. Known as “The Angel of Grandin Road,” Tarpley was an African-American Korean War Vet widely known for his goodwill, charity and kindness. And he was supposed to be included in the mural. But no attempt to incorporate him into preliminary drawings felt worthy of Tarpley’s unique contributions.

Toobz offered to paint Tarpley on the opposite side of the building as part of the commission, as though he were standing on the street corner where his was a frequent and treasured presence. After some coaxing, his offer was accepted. Still alive at the time, Tarpley stood on the street every day and watched the life-size painting of himself emerge. He tried to tip Toobz, who refused until he realized that he should respect the 86-year-old’s wishes. Not long after the completion of the mural in 2019, the artist received word that Tarpley had passed away peacefully in his sleep. But his painted memorial lives on and is, in fact, so lifelike that people offer greetings in passing.

March 10, 2021
The Return of the American Chestnut at Virginia Chestnuts

The Return of the American Chestnut at Virginia Chestnuts