As it turns out, Virginia is for Plum Lovers. From Flint Hill to Virginia Beach to Wirtz, these three Virginia-made products are jam-packed with the sweet-tart fruit. You can eat your plums and drink them too. 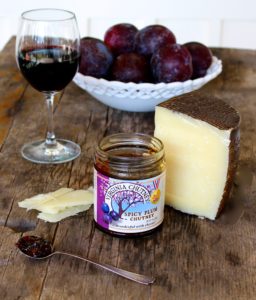 When proud English-born Americans, Clare and the late Nevill Turner, moved back to America from England during the recession of the 1970s, it was not with the intention of opening a cannery. And certainly not an award-winning one featured in the New York Times and Washington Post with products widely available on the shelves of national retail outlets from Walmart to Whole Foods.

Together, this foodways anthropologist and former Montessori teacher and her scientist spouse—with a storied past as a land developer, manager to the Royals on Mustique, and hotel/restaurant owner—began their improbable business. It was Clare’s idea, making English chutney in their log cabin in Little Washington.

In 2013, they expanded their operation to the Aileen Plant in “very rural and lovely” Flint Hill where Clare and son Oliver now employee about a dozen people making their Spicy Plum Chutney and other sought-after condiments. “Pathetic at cooking,” Nevill offered to create the cannery saying, “Just tell me what you are doing.” Recalling “terrible fights,” Clare now admits that, though she hates to say it, “It was brilliant.”

Together for decades, the couple’s marital adventures never included chutney making and the first attempt was a “disaster.” At the time, Clare remembers, chutney seemed very “foreign” to Americans and “no one knew what it was.” Rhubarb either. So, the rhubarb and damson versions were a bust, and it was on to purple plums.

According to Clare, who scoffed at Nevill’s assertion that she needed a business plan with, “It’s just bloody chutney,” the recipe is a “no-brainer,” more like English chutney than Indian. Made from ripe plums, brown sugar, raisins, garlic, cider vinegar, onions and spices, it is sweeter, says Clare, “like jam.” 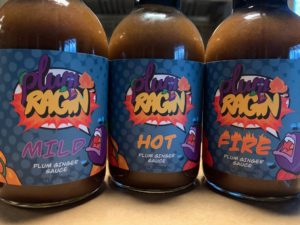 PlumRagin fans have an ’80s band concert and a gracious host to thank for the launch of the current fleet of five sauces: No Sweat, Fragrant Ghost, Mild, Ghostly Mild and Hot Sauce. When, in 2007, Don Poole decided to whip up something special for an infrequent visit from his sister- and brother-in-law, in town for the concert, he could not have known he was birthing a business.  But an online recipe for ribs coated in a rub and slathered in sauce yielded results so “amazing” that he ate the leftovers cold the next morning.

And he couldn’t leave well enough alone, continuing to experiment with the sauce over the years, changing amounts of, especially, the ghost, habanero and Trinidad scorpion peppers. With each recipe yielding 1.5 quarts, Don and wife Nancy would have soon been awash in sauce, so he began giving away extra to friends who became fans.

By 2019, the couple was ready to take the next step, paying a visit to Ashburn Sauce Company where Willard Ashburn, “a Pungo native since forever,” walked the couple through the process that would get the product from their kitchen to paying customers. Their “full-blown corporation” has one full-time employee—their daughter, who handles marketing, customer relations and the website—a food truck and more on the horizon.

Since plums contain natural preservatives, you won’t find any added to the PlumRagin sauces, nor will you find gluten in these deeply colored, richly flavored condiments, which do double duty as marinades.  Plus, they are almost vegan, containing just a bit of honey. The sauces can be ordered through the company directly with free delivery on Amazon, at The Shack at the Virginia Beach Oceanfront, and at Virginia Beach Farmer’s Market. 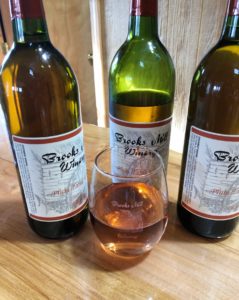 What started as a treat for H.T. Page’s wife, Rhonda, became a full-fledged business in 2008 with H.T. serving as winemaker and Rhonda as manager of the tasting room in a converted garage. The couple’s hobby is now a successful business located near Smith Mountain Lake in Franklin County. The vineyard took root in 2006, but you won’t find any grapes here. No, this is an all-fruit winery that began with blackberries and expanded to include apples, blueberries, cherries, peaches and pears. Plums are purchased.

Brooks Mill’s dozen wines run the gamut from dry dinner wines to sweet dessert counterparts. The plum wine is semi-dry with a deep blush color. Rhonda recommends it for the holidays as it pairs well with the main course and all the trimmings. Made from both the skin and the flesh of the plum—everything but the seed—the production process takes about six months and requires no aging.

The Pages chalk up their success to research and trial and error with this year’s batch of Plum Wine yielding some 400 bottles which they hope will last through the end of the year. Their bottled wines available at the winery, on the website, and at a handful of shops in Moneta, Roanoke and Moneta.

March 9, 2020
Couple Gets Crafty with Barrel-Art

Couple Gets Crafty with Barrel-Art