It’s been called the hottest ’hood in RVA, and it’s where an influx of breweries, distilleries and cideries have decided to put down roots in the River City in the past few years. We know well the comradery and community that sharing in a few local libations can bring. But exactly what about Scott’s Addition—this happening historic district that was once an industry-only zone—is a current draw for craft beverages businesses, entertainment venues and a slew of other buzz-worthy restaurants and their fans? 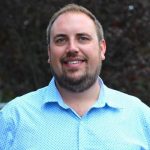 We sought out Richmond cultural guru and lifelong resident Trevor Dickerson for some answers. Dickerson runs the online news magazine RVA Hub as well his marketing firm, Boulevard Creative, and also serves as president of the Scott’s Addition Boulevard Association. He filled Savor in on what’s making this area so popular and why he chooses to live—and drink his favorite beers—here.

You were born and raised in the West End of Richmond? What made you stay and make a life in the city?

Dickerson: My family’s been here for generations. I’m actually, I think on my mom’s side, a direct descendant of William Byrd, who founded the city, so I like to joke that our family has been here since we came over on boats. I think that Richmond is just such an awesome city. It’s so dynamic, and it’s the perfect big small town, I’d say. There is so much going on, and it’s truly on the map nationally for our breweries, our restaurants, our culture, our river, the festivals. It’s a great city, and I couldn’t imagine living anywhere else at this point in my life.

Speak a bit about your love of the local culture.

Dickerson: I think we have such a great local food scene. It’s just incredible the accolades that local chefs and restaurants have been racking up in the past seven to 10 years. I love when there is always somewhere new and innovative to check out in that realm. There are also so many outdoor activities and bikers. We have a big circuit of bike lanes around Richmond and a great infrastructure. I have actually helped start a bike Meetup called Breakaway RVA, and we get about 100 people out each month, and we will do a bike meetup where you are led on one of six different routes through neighborhoods around town to a secret destination that might be a food truck or speaker or beer and live music, something like that, so it’s good for families.

That’s a great way to learn new things about the city and discover new places.

Dickerson: Yeah, it’s funny how you see things differently either as a pedestrian or on a bicycle. It gives you a different view of the world so it’s a good way to discover your city whether you are from here or new to town. But I think Richmond is such a dynamic and friendly city, and everybody here is so nice. If you are bored in Richmond from the early spring to late fall, you’re not trying hard enough.

And you have found a way to marry your passion for Richmond culture with your background in writing and design. Your currently run RVA Hub and Boulevard Creative. What do those gigs involve?

Dickerson: Boulevard Creative is my marketing company I started in 2014. We do everything from web design to graphic design, social media—kind of a jack of all trades, master of none for small and mid-size businesses that are looking to move the needle. Then RVA Hub is an online news magazine I started in 2016 after writing for or RVANews.com for quite a while. They shut down in 2016 so I started this as a continuation of that online newspaper. We hope to focus on hyper local news and events from the neighborhoods around town and also offer a city-wide perspective.

You know a lot about Richmond. Out of all the places and neighborhoods to choose to live, what drew you to Scott’s Addition?

Dickerson: I moved to Scott’s Addition in 2013, totally by happenstance, and it was a vacant, industrial area at that point. There was a lot of industry that was vacating—there wasn’t a whole lot going on. So, there was kind of a blank canvas of a neighborhood with these big warehouses that were open for folks to come in and rehab, so I think it was the perfect storm—historic tax credits and having a good location—to pave the way for this massive boom that’s happened over the past five to seven years. The first brewer to come in was Isley Brewing Company in 2013, and they took over a warehouse space and found a following, and fast forward to 2019, and we have 15. We have everything from breweries to distilleries to a meadery. We have folks who are distilling everything from rum to gin to vodka. We definitely have become known for being the boozy neighborhood.

You went from happening upon the neighborhood as it was beginning its resurgence to becoming president of the Boulevard Association. How did you earn that role, and what comes along with the fancy title?

Dickerson: Shortly after I moved to the neighborhood I started attending the meetings because I wanted to get a bit involved with what was going on in the area—how they were working to make it a better place to live, work and play. When I came into the pull they were more of a business association. Now we have a lot more residents and commercial users like restaurants and breweries and all of that stuff. We have transitioned into an association that represents all of the people that are here. I started to get more involved, and the next thing you know I was voted in as president. I have been president since January of 2018 and will be through December.

We are in a transition as an association ourselves just like the neighborhood is, so we are trying to better represent the interests of our growing neighborhood, and we are experiencing a lot of growing pains that come along with that—traffic, parking, things like that. The density is much greater than it used to be. A factory that maybe had 10 workers has been replaced by an apartment complex with a couple 100 residents. Obviously, you have got a lot more demand for parking, you run into some issues with traffic and circulation. We are working with the city on a traffic study as well to see how we can mitigate some of these issues. So, our role is to help facilitate that movement toward smart growth.

Scott’s Addition is indeed growing and has been called Richmond’s hottest neighborhood. Bumps in the road aside, what do you feel are the keys to this success in the past few years?

Dickerson: I think the boom really started when the neighborhood was designated a historic district, and what that opened the door for was people using historic tax credits and taking advantage of rehabbing these old buildings. That really lit a fire under our neighborhood, and that’s why it was so ripe for development. Secondary to that is probably the location. It’s at the intersection of I-95, I-64, and I-195 and along West Broad Street, which is probably the largest non-highway route that goes through the city, so it’s a great location, and it was a natural next move I think for something cool to happen.

You mentioned that this 20-block area is home to 15 breweries, cideries and distilleries. Was drawing these types of beverage businesses to this neighborhood strategic?

Dickerson: I would love to take credit for it as an association, but we’ve really been along for the ride when it comes to that. Isley started it and found success, and then other folks were like, ‘This is a great spot to open a brewery. It’s got plenty of open spaces to put in our tanks. It’s a great location so people are popping in right off Broad Street or Boulevard.’ It naturally, organically happened.

In what ways has the craft beverage industry helped the neighborhood grow?

Dickerson: It obviously brought in a lot more foot traffic. I think Isley going into that space made people realize there is a lot of potential here. We have almost 3,500 residents now, so it brought in a lot of apartment communities into these spaces, and it brought in more people that said, ‘Hey, this is a cool space, and I wouldn’t mind living here.’ Developers took note of that and started rezoning for that use. So, these places jumpstarted what was once a stagnant, declining neighborhood where industry was moving out and brought new life in. 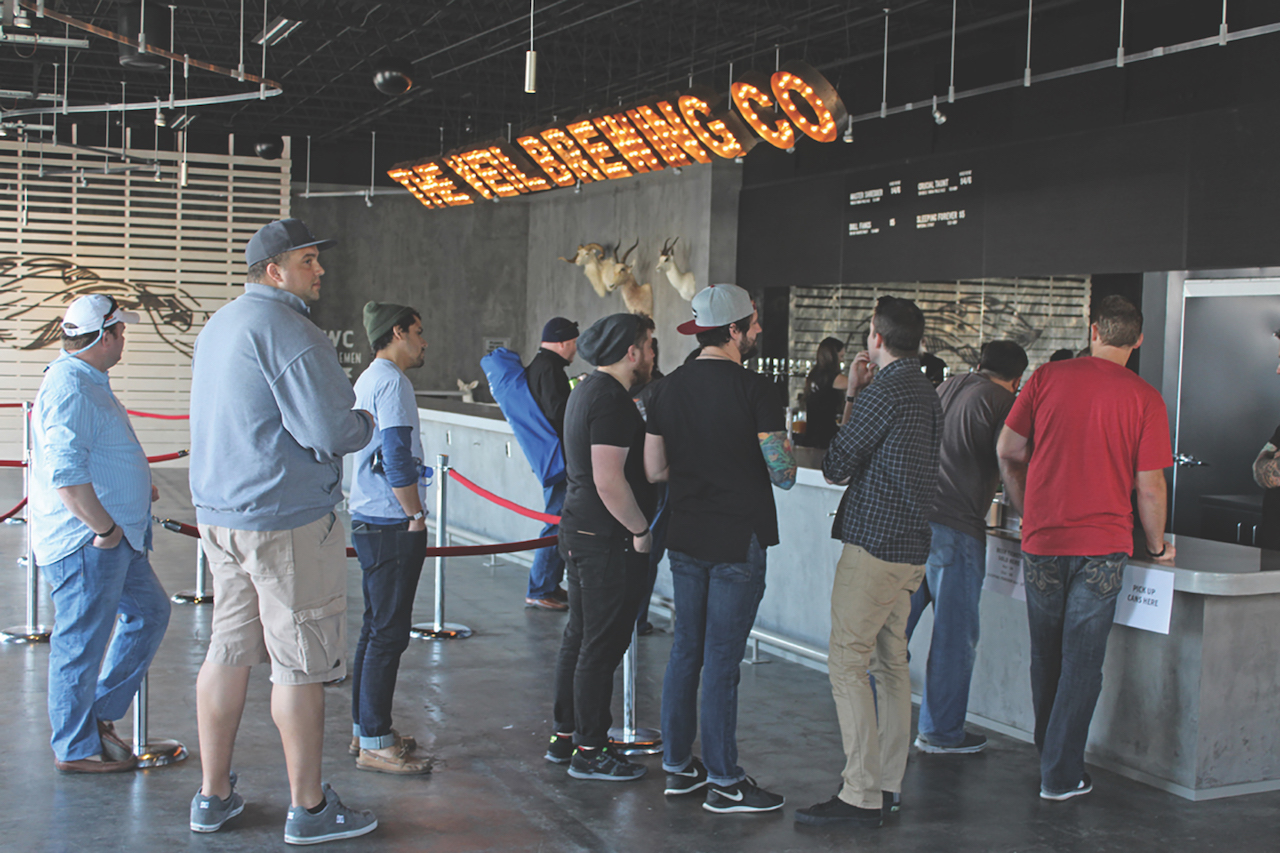 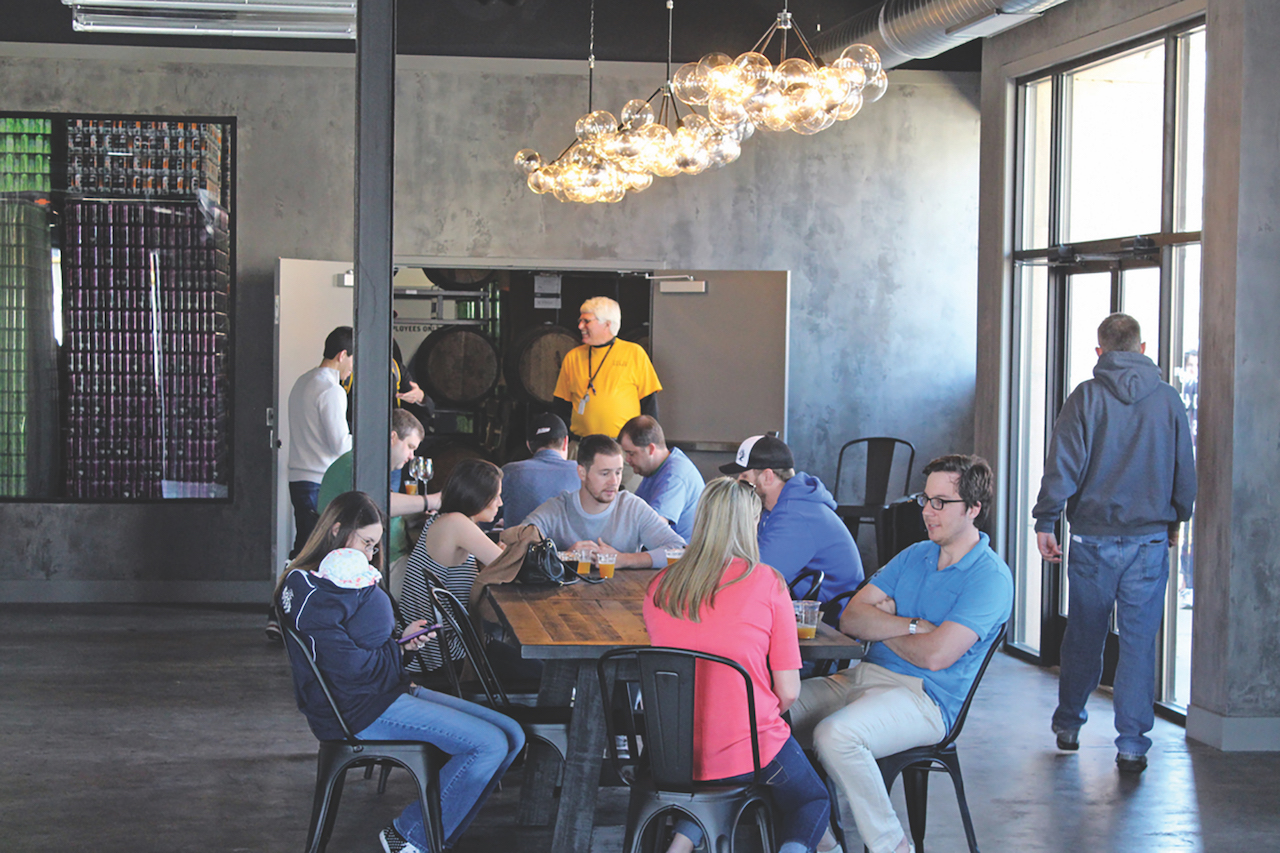 What are some of your favorite breweries and cideries in Scott’s Addition to visit?

Dickerson: My very favorite is probably The Veil Brewing Company. They are doing so many innovative things and are genius marketers. They do these Tuesday can releases where they do really small batch releases, and they draw people from out of state. They will stand in a line wrapping around the building for hours. It’s just incredible the following they have, and they put out a great product. They are followed by Ardent Craft Ales. Their saison farmhouse ale is probably my favorite beer in Richmond. And then I really like Väsen because they have some really great goses and sours.

What’s on tap (literally) for Scott’s Addition? What are some of the goals for its future growth?

Dickerson: In the near future you are going to see two things, one of which that is already happening. We are getting a lot more entertainment uses—we have a boutique bowling alley, River City Roll, that’s the only bowling alley I could ever go to and not actually bowl. There are so many other things to do. They have a huge bar that extends outside and great food. We have another place coming in, a barcade called The Circuit, that has these different taps along the wall where you can pour your own craft beers and pay classic ’80s arcade games. We have an axe-throwing bar coming in, a shuffleboard club called Tang & Biscuit. That’s the first thing that’s taking over right now.

The second is the neighborhood going vertical. As part of our rezoning it allowed us to increase the height of new buildings. Right now, things are one or two stories, but we have a couple plans in the works that are with city council right now to build up to 12-story buildings, so we are going to see the neighborhood getting denser and going up, if you will.

I may already know the answer to this, but do you have any plans to ever leave the River City?

Dickerson: I don’t think so. I think I see myself building a life here with my wife and future family, and I don’t know of anything that could take away from the city that I just love.