A sense of tradition and kinship, as much as elevated coastal cuisine, prevail at Heirloom in Virginia Beach

Dictionaries define heirloom as “a valuable object that has belonged to the same family for many years,” noun. The crew at Heirloom, the elevated farm-to-table restaurant near the Virginia Beach Municipal Center, parsed its meaning long before opening in December 2020 and still do.

“We use it as a verb and adjective,” says chef-owner Brent Cowan. Apparently a conjunction, too, as Cowan notes: “I’m always telling my guys in the back, you’re only as strong as your relationships and connections, personal and professional.”

Hence, a sense of kith and kin, as much as coastal cuisine, prevails. A farmer making a delivery gets treated to a pint of just-picked strawberries. The next week, he drops off extra pea shoots. Right neighborly. 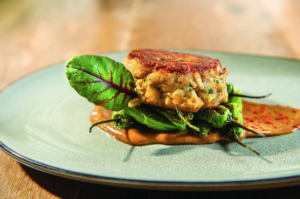 Those are Shaunna’s grandparents, Frances and Robert “Toppie” Riggs, digging up potatoes in the photo in the foyer by the “Happiness is Homemade” sign. The circa 1780 farm on Colechester Road, in her family for nearly seven decades, looms large here in pictures. Brent makes sure during lineup that new staff learn the history behind the images so they can appreciate Heirloom’s roots. And be brought into the fold.

Hearing him discuss the time and effort that go into sourcing as many local ingredients as feasible for dishes inspired by local culture, it’s as if he’s grafting branches onto the family tree. “I just got carrots and bok choy from Seafield Farm,” he says, his eyes practically misting as he recounts the freshness of the produce from Jenna Rodriguez and her husband Casey’s organic Cape Charles farm. “We’re the only restaurant Seafield provides, and it’s only because Shaunna’s cousin teaches art at Kellam High with Jenna.”

Describing how Cartwright Family Farms in nearby Pungo supplies Heirloom’s antibiotic-and-hormone-free pork, Cowan whips out his phone and shows off snapshots of newborn twin boys with avuncular pride. “I’ve known Derek for over a decade,” he says of their dad, Derek Eason, a firefighter and a heritage-breed-pig farmer (his maternal grandparents were Cartwrights). “He’s a good friend, and Shaunna went to school with him.”

That pork shines in a juicy bone-in chop served with sweet potato “2-ways” and baby kale. Thai chili-glazed whole snapper, fried head-to-tail and accompanied by coconut rice and candied plantains, is another top seller as is Joyce Farms Southern fried chicken. Sweet and sassy thanks to pepper-spiked rose honey, the bird’s worth ordering just for its sidekick, pimento mac ‘n’ cheese.

Butterflied fried shrimp (available as a starter, entrée or during the enormously popular weeknight Happy Hour that spills over from the bar to the four-season porch) begs comparison with area gold-standard Steiny’s shrimp. Considering the beloved and venerable Steinhilber’s Thalia Acres Inn, Morris respectfully submits, “We’d be up for a shrimp-off.”

Cowan wanted to serve his grandmother-in-law’s chicken ‘n’ dumplings (those are her vintage recipes on one wall) but scrapped the idea, admitting, “It was hard to get it not to look like a bowl of pot pie.” Heirloom is upmarket albeit steeped in down-home authenticity. It’s a balancing act evident throughout, including a sophisticated yet accessible wine list and playfully beguiling seasonal cocktails.

Service, too, blends high quality with comfort. “We’re open five days a week, so everyone gets a ‘weekend,’” Morris says in accounting for front-of-the-house consistency. “This allows people to work full-time without floating around.” It also grants a family life, notoriously non-existent in much of the food service industry.

Cowan savors days off with his sons, ages 9 and 5. Both don pint-sized chef coats, the younger teetering atop a milk crate, to help dad cook at home. “They like working with fresh herbs,” he shares.

“But when I say, ‘OK guys, time to do the dishes,’ they say, ‘No, it’s time to go play.’” Tradition takes years to cultivate.

September 25, 2017
Spaghetti with Carbonara and Crab

Spaghetti with Carbonara and Crab