“Fresh from our all-weather backyard farm,” says D’Amelio with a chuckle, nodding at the snow flurrying past the window. He just finished picking produce in the restaurant’s adjacent Trout House, which Charlottesville-based company, Babylon Micro-Farms, transformed into a small hydroponic growing facility in 2018.

Inside, a pair of vertical shelving units burst with organic greenery. Both are about 10 feet tall, 20 feet long and 5 feet wide. Low-profile tube-lighting, irrigation pipes, sensors, and spray and wicking systems create a chic, futuristic look. The micro-farm contains more than 30 heirloom varieties of herbs, edible flowers and leafy vegetables—and provides almost 100% of salad and garnishing ingredients for the resort’s three full-service restaurants.

“And the quality of the produce is just superb,” boasts D’Amelio. Better still, in terms of growing your own food, “it doesn’t get more convenient than this.” 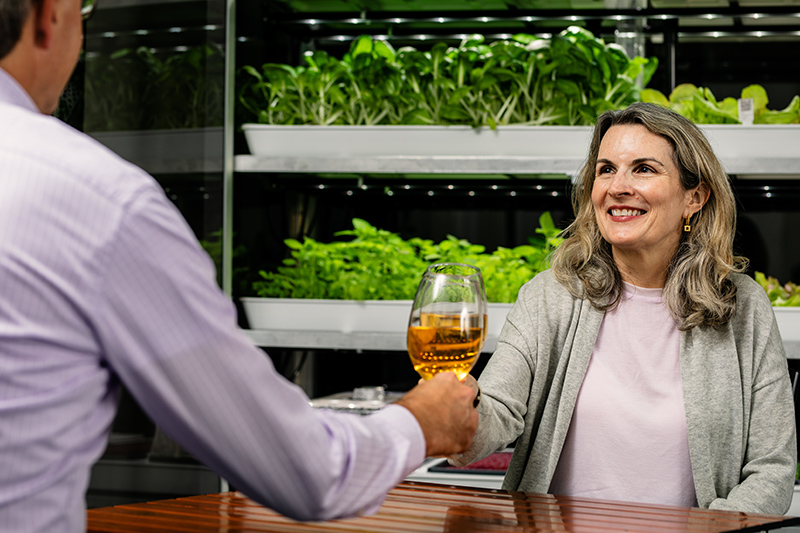 “This system totally revolutionizes our [farm-to-table programming], particularly in the winter,” says D’Amelio, who joined the Boar’s Head in 2019. For example, the micro-farm currently churns out 300-plus heads of lettuce a week. In the spring and summer, he and his team devote a portion of the farm to growing seedling veggies for an outdoor garden.

D’Amelio arrived at the Boar’s Head skeptical about indoor micro-farming; Would tastes really measure up? But his experience has made him “a huge believer.”

Babylon president Alexander Oleson calls the testimonial par for the course. Since launching in 2017, the company has installed Trout-House-style systems at dozens of restaurants, schools, businesses and homes, mostly in Central Virginia. Its growing list of commercial clients includes Three Notch’d Brewery, Dominion Energy, the University of Virginia, Brasserie Saison, Red Salt Chop and Sushi in Richmond, and more.

“What we’ve done is take the technological advancements affected by [corporate farming] and applied them at a much smaller scale,” says Oleson. The result is high-efficiency food autonomy at a relatively affordable price: A glass-encased, 32” x 66” x 96” tall residential model with polished steel framing and hardware costs about $3,500.

A look at eco-related stats proves the logic sound. Fifteen-square-foot models produce the equivalent of 2,000 square feet of traditionally managed farmland. They slash fertilizer and water usage by 90-94% and carbon emissions by about 71%. They also decrease food waste. Produce sold in U.S. grocery stores is transported an average of 1,500 miles; about half perishes en route. 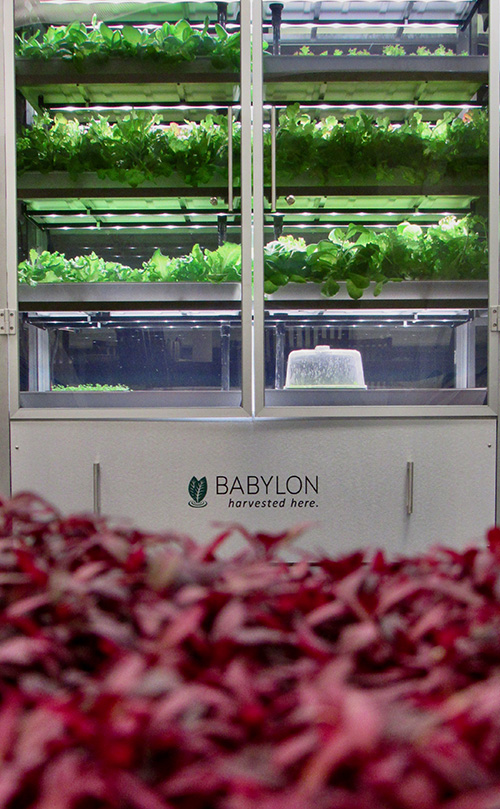 Oleson and founding partner, Graham Smith, got the idea for Babylon working on a social entrepreneurship class project at UVA’s Darden School of Business around 2015. The two sought to devise an innovative system for providing nutritious foods to Middle Eastern refugees. They subsequently designed a modular micro-farm that was low-cost, easy to setup and fully automated.

Building a pilot unit, they spotted a gap in the U.S. hydroponics market. “There were small DIY kits and systems for commercial farms, but nothing in-between,” says Oleson. The former required assembly know-how and lacked the technological sophistication of commercial units. “And they were just really unsightly.”

Oleson and Graham envisioned sleek, technologically sophisticated systems that were 100% plug-and-play. They could be made-to-order to fit in different spaces and look beautiful in modern kitchens, lobbies, eateries or wherever. Non-GMO heirloom seeds would come from the Thomas Jefferson Center for Historical Plants at Monticello.

Babylon launched with grant funding from the National Science Foundation. Its success has since brought investments from Silicon Valley and elsewhere and is enabling the company to scale up operations. Talks are currently underway with national hotel, restaurant and grocery store chains to install units en masse.

“Our big goal is to augment existing sustainable agriculture models by bringing [micro-farms] to the mainstream,” says Oleson. He imagines a future where countless grocery stores are equipped with solar panels and Babylon units that offer fresh leafy greens and other produce to consumers throughout the year. Ditto for restaurants, school cafeterias, apartments and homes.

If that happens, it’ll be a big step toward creating healthier, tastier, more efficient food systems for the future.

October 17, 2018
Farm Dinners are Thriving Across the Commonwealth

Farm Dinners are Thriving Across the Commonwealth