Memories of a sweet summer job

Virginia loves melons. They grow wonderfully in our climate, and they make the perfect sweet addition to every picnic table. However, there is one melon that has brought Virginia some attention: the cantaloupe, a deceptive fruit with a blandly colored, rough netted rind and soft, juicy center.

There is a hidden beauty in these modest melons. They aren’t printed on tablecloths and sundresses or painted into Norman Rockwell’s idyllic picnic scenes. However, I would argue that they should be. After all, despite the cantaloupe’s quiet, non-ostentatious reputation, it is the most popular melon in America, consistently outselling the pompous watermelon.

But despite loving and growing up around cantaloupes, I can honestly say I didn’t fully appreciate them either until I spent a summer years ago deep in cantaloupe juice. That kind of intimacy with a melon? Well, let’s just say it changes things.

If you are traveling north on Route 43 in Bedford County towards the Peaks of Otter, you will spot a quaint little store resting in mountain shadows and encircled by crouching peach trees. The single ancient gas pump still works, and inside you’ll find the best pie in the Blue Ridge, among other wonderful treats.

At Mountain Fruit and Produce, where I worked that summer, we got cantaloupes by the box load. By the shopping cart load. By the truck load. And we sold it, too, hand over fist.

Restocking dry goods on the shelves involved battling the crates of cantaloupes that were left in the aisle for lack of better floorspace. We sold them whole, we sold them in slices, in ice-cream form, and in juice form.

People would wander up the mountain specifically in search of a good cantaloupe. They would tap their fingers against the rind, sniff the bottom where the vine was once connected, give it a good shake and inquire as to where each cantaloupe was grown until they settled on the perfect one—the cantaloupe of their dreams. Over the course of that one summer we probably sold a thousand cantaloupes. Suddenly, a large portion of my hourly wages was thanks to this one particular fruit.

That summer I sliced, diced, peeled, pulverized and blended hundreds of pounds of cantaloupe. I would arrive at the store in the morning and be ushered to a shopping cart straining under the weight of our most recent shipment. It was delivered to us from the orchards in beat up flatbed trucks loaded down with farm hands.

I learned even more tips and tricks on spotting the perfect cantaloupe: one that is nearly round, weighs about three pounds, gives just a little when you squeeze it and makes a nice hollow knocking sound when tapped. 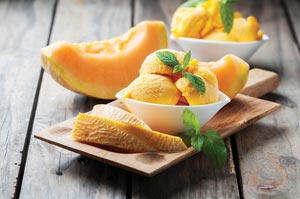 Unlike the watermelon, the cantaloupe is easy to work with. A sharp blade slices through the rind with little effort and the center of the fruit is so soft that if the knife wielder is not careful, he may lose control of the tool and cut himself, caught unaware when the blade falls rapidly through the meat. (Trust me.) Once halved, the delicious sun-colored fruit clings closely to the thin rind where a ring of light green brings the two together. The fruit is light, soft and sweet.

At the center of each half is a hollow cavity where around 400 little seeds are stored in a runny liquid, best removed by a metal stirring spoon. But as I learned at Mountain Fruit and Produce, you must be careful to not scrape away too much of the fruit. In the cantaloupe ice-cream business, every bit counts.

Long before becoming a beloved summer farmers market find, the cantaloupe wasn’t even grown in the U.S. It originated in Iran, India and Africa, around 5,000 years ago, where it grew naturally and was a staple food for the natives of each region. Europe’s first encounter with the cantaloupe, however, is quite an interesting tale.

There is much debate surrounding the truth of this story, but it is worth being told. Thirty miles north of Rome, there was a small papal village by the name of Cantalupo di Sabina. In this village rested the country estate of Pope Paul II, a very large, very demanding Pope who held his office from 1464 to 1471. During this time, an envoy of Armenians arrived from the East bearing gifts of melons, namely, the cantaloupe. Pope Paul had one taste and was mystified. He became obsessed with the cantaloupe, devoting garden space to the wandering vine and demanding that they be grown and harvested in the best possible conditions, ensuring the best possible outcome.

Paul was a pious man. (Maybe. It’s debatable.) But his desire for the melon was insatiable, and in July of 1471, at the age of 54, Pope Paul II suffered a heart attack and died. What brought on this heart attack? He suffered severe indigestion brought on after gorging himself on multiple cantaloupes hours before his death. Or so the story goes.

Fast forward several years and Christopher Columbus brought the cantaloupe with him on his maiden voyage to the New World in 1492. The fruit grew wonderfully in America’s fertile, loamy soil and thus the cantaloupe turned a new leaf, feeding settlers, natives, colonists and revolutionaries, to eventually find a soft landing place in every grocery store across the U.S.

Virginia has particularly loved and embraced the cantaloupe. In fact, we have a thriving festival dedicated to it. The Virginia Cantaloupe Festival began in 1981 in Halifax County, where it is suggested that the best of the best cantaloupes are grown. In past years, the festival limited ticket sales to “only 1,500” and they would always sell out.

With all of this information in mind, I hope the next time you discover that pale orange cube in your fruit cup you won’t dismiss it entirely. The cantaloupe is not meant to be plucked before its prime, crammed into a plastic cup alongside other, less worthy fruits and refrigerated for weeks on end. It is meant to be enjoyed fresh, in its boldest colors. Or better yet, as a dessert.

To this day, enjoying a spoonful of freshly made cantaloupe ice cream at Mountain Fruit and Produce brings back memories of that summer where I learned to respect this misunderstood melon. 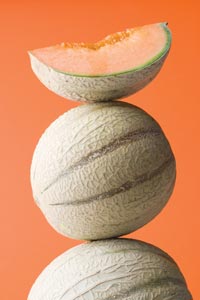 How to Choose a Cantaloupe

Color—The outside should be a uniform pale, creamy yellow, with no green or white.
Webbing—The web-like texture covering the melon should be consistently rough ridges all the way around.
Stem—A ripe cantaloupe will fall on its own from the vine. The point where the stem was attached should be a little indented. If it is poking or bulging out, it could mean the farmer cut the melon too early.
Scent—The stronger the smell at the stem, the riper the melon.
Feel—Give it a good squeeze. If it’s hard, it’s not ripe. It should give a little in your hands. If it’s squishy, it’s overripe. That doesn’t mean it’s a goner! These are great for juicing.
Sound—Finally, give it a little knock. You should hear a low, solid thunk. A high-pitched sound could mean unripe.

Rambling Down Route 11 on a Virginia Road Trip