Taking a detour off Route 13 just 12 miles north of the Chesapeake Bay Bridge-Tunnel will place wanderers right in the middle of the Eastern Shore town of Cheriton, a sleepy little village with a population of less than 500 at last count. Driving down the anything-but-bustling Bayside Road—dotted with various churches, a handful of small businesses and a fire station—you’d never imagine discovering Chef Jason Van Marter behind the doors of The Local.

On a recent dreary Monday, a gregarious Van Marter enlivens this easy-to-miss eatery with his infectious laugh and surprising (for this area) gourmet cuisine. He glides back and forth behind a seven-seat counter sporting a bright red chef’s jacket and tight man bun, sipping coffee and softly singing to Old Crow Medicine Show’s “Wagon Wheel.” He chats about the Eastern Shore’s food industry innovators and lights up over plans for Egyptian walking onions from Perennial Roots Farm in Accomac and a new rosé sea salt from Barrier Islands Sea Salt Co. as he plates a Clam Ceviche creation, a practice he lovingly refers to as “laying canvas.”

It’s a good thing that entertaining patrons with conversations about cooking and his cause to support local culture and cuisine energizes Van Marter, because at The Local, it’s impossible to hide from his customers.

“People are literally right on top of you,” says Van Marter while clipping microgreens and placing pieces of fried tapioca sheets on top of his ceviche with a pair of tweezers. “It’s a whole different concept to work in an open kitchen where people can see you than to work at a counter where, not only can they see you, but they are close enough to touch and talk to you.”

Van Marter came to The Local in order to begin offering counter service in late 2016, serving lunch and breakfast a few days a week. Before he arrived, owners Gail and Rowland Scott were running the space as a community artisan co-op but wanted to find someone to cook and serve meals.

“I opened up the week before Thanksgiving, and the first thing I did was sell pumpkin bread behind the counter,“ laughs Van Marter about his slow start. “I emptied out my bank account, went to Restaurant Depot and bought a whole bunch of supplies, came back and wrote a few things on a chalkboard and opened the door.”

Two and a half years later, local art for sale still adorns the walls, but Van Marter has taken over all of the operations at The Local, and the focus is on food. He started with just three items available per service but now offers a full menu of items for breakfast, lunch and weekend dinners. On Thursdays he hosts a popular chef’s dinner, a four-course feast prepared and served by Van Marter at his colorful, mosaic-tiled counter.

On other nights guests sit at one of just seven charming, mismatched wooden tables and order dishes like sous vide Border Springs Lamb short ribs with garlic butter, Perennial Roots Farm arugula and zucchini latkes or pan seared Dover Sole with coconut milk minted jasmine rice, roasted beets and Tulsi basil pesto cream before hopefully taking time to meander to the back room. They pass the old-fashioned popcorn machine and shelves where Van Marter keeps his microgreens under fluorescent lights and ferments his own black garlic to take a look at The Local’s market area, which the chef has expanded to include a wealth of local products.

Van Marter says he’s always had an entrepreneurial spirit and yearned to run his own place, but in a locale short on foodies that prizes simple cuisine and home cooking, the obvious question is—where did he come from, and how on earth did this out-of-the-box chef land in Cheriton? 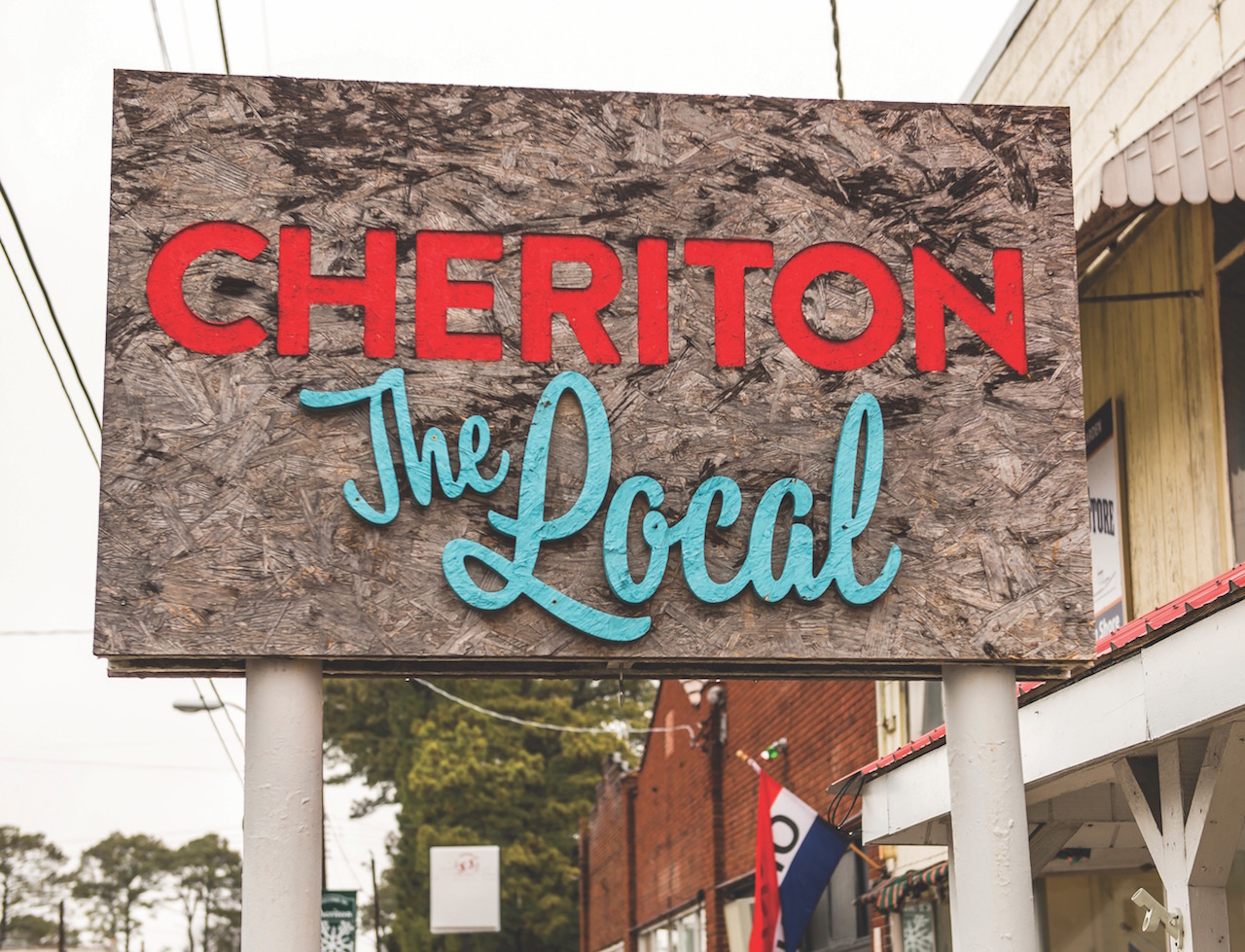 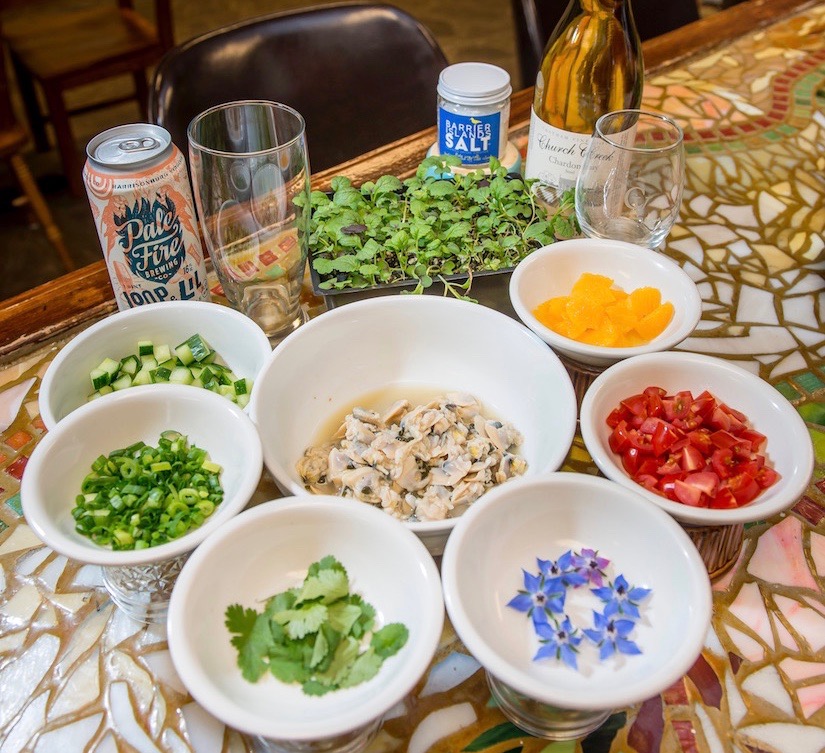 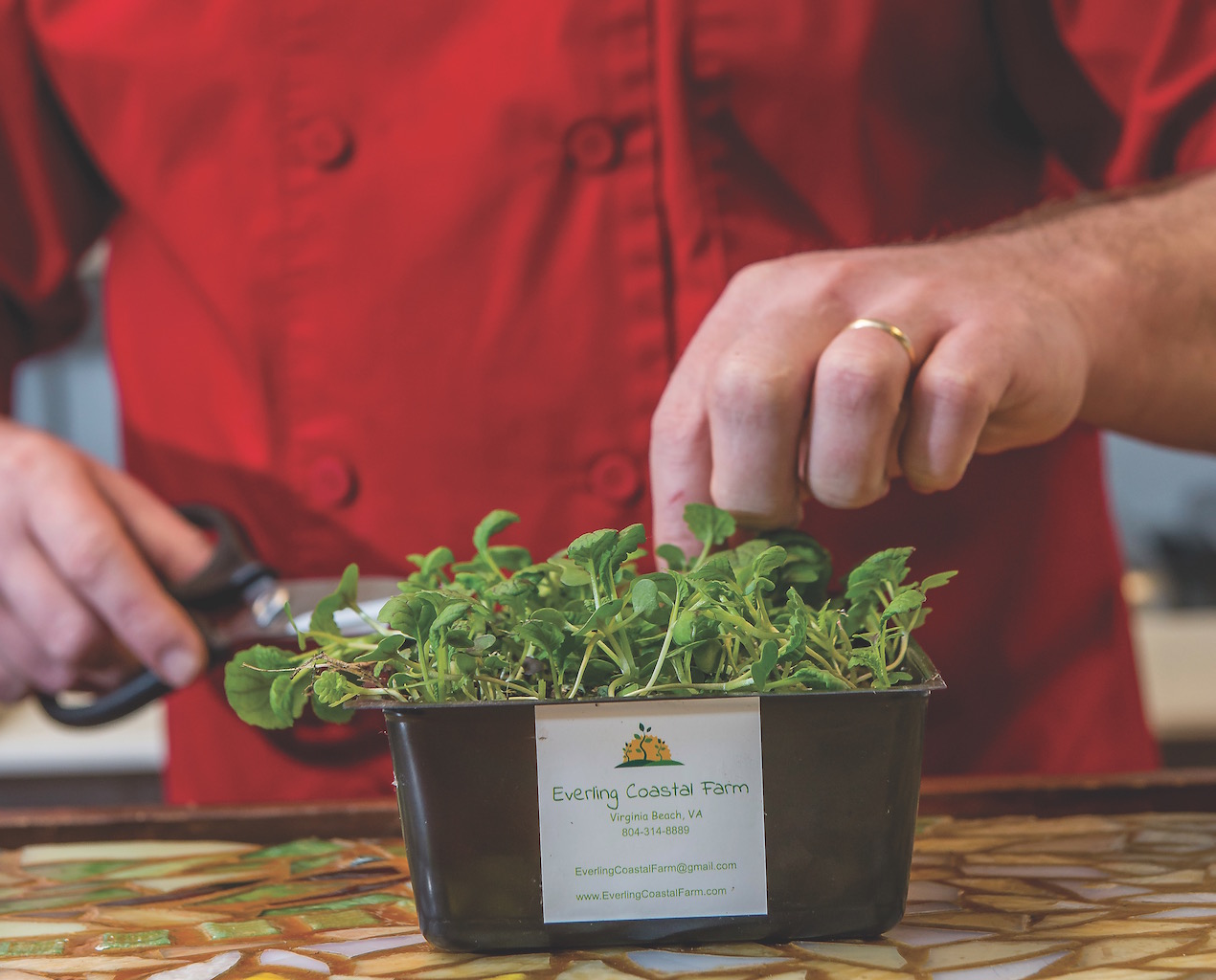 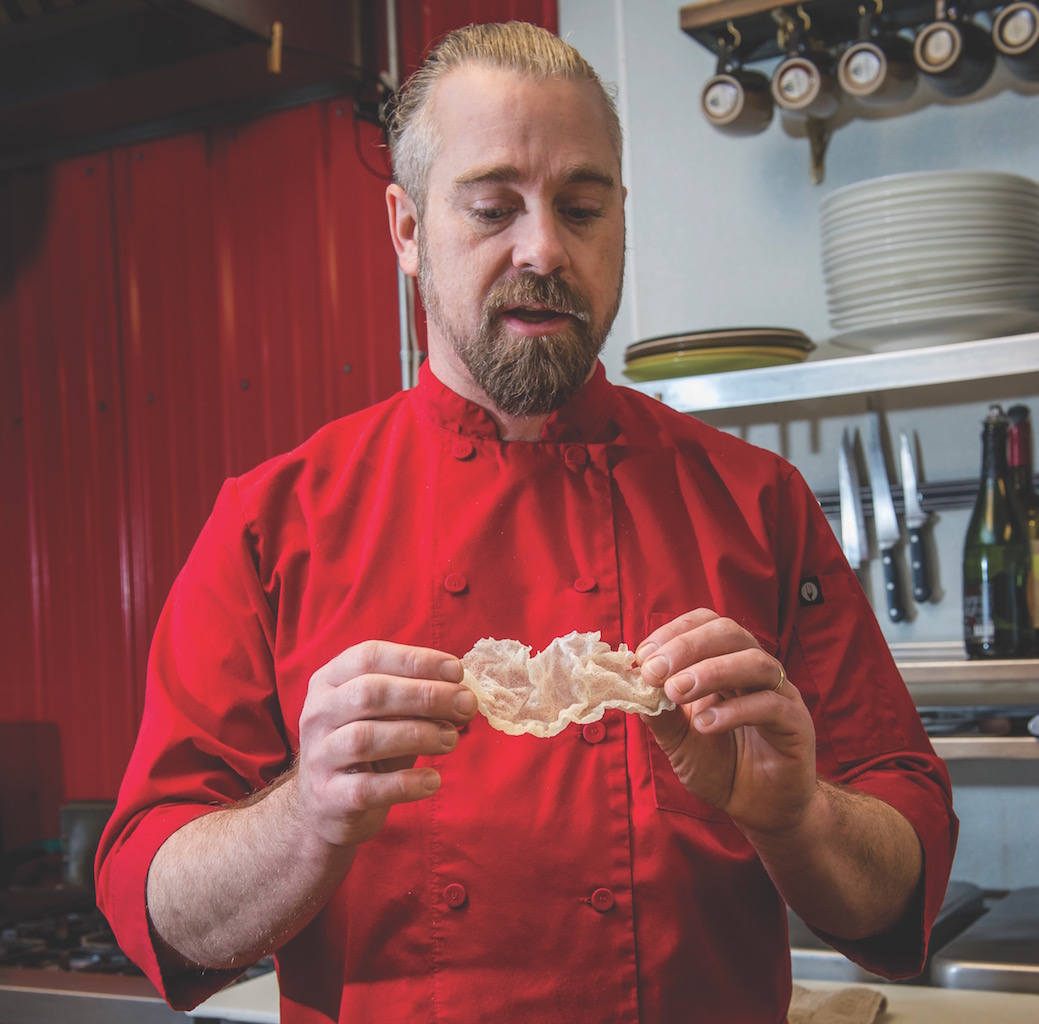 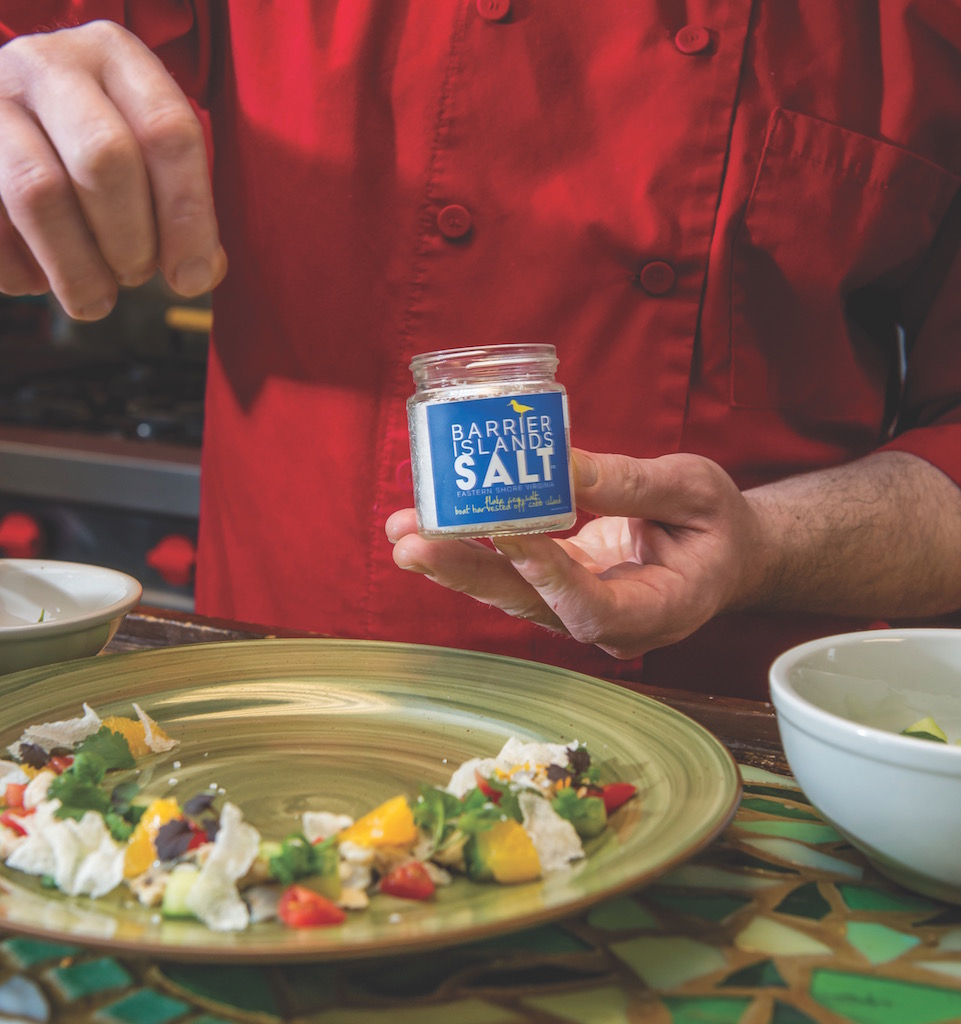 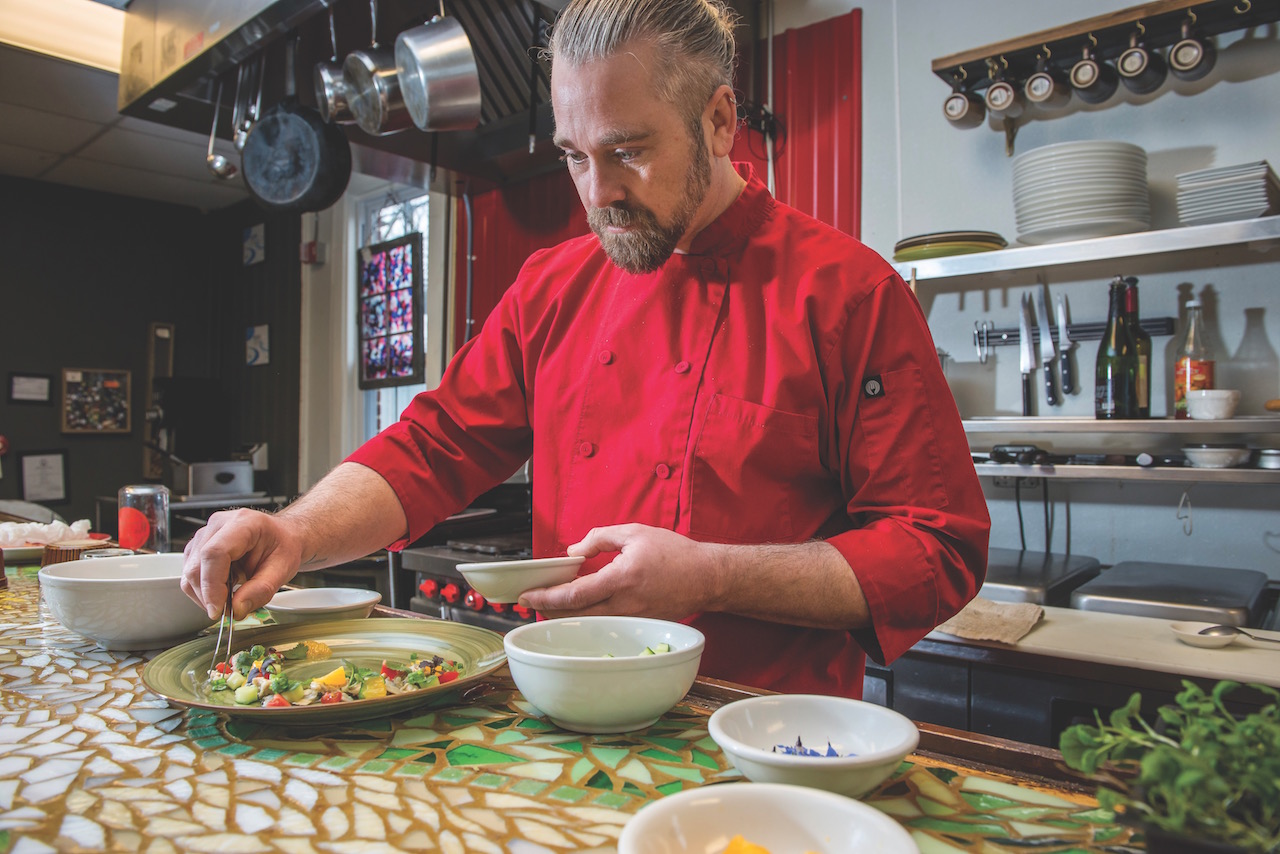 Three years ago Van Marter and his wife learned about a promising opportunity at The Local and, with a daughter on the way, decided it was time to settle down and pursue their own business, which meant moving back to Virginia to the small town of Cheriton where his wife grew up and they learned about a promising opportunity at The Local. They now live a block away from the restaurant, and Van Marter describes spending every free moment with his daughter and baby boy.

It’s not surprising Van Marter values family—he credits his uncle with instilling his desire to be a chef and speaks fondly of admiring his magazine-worthy meringue pies and pastries from a stool in his kitchen and cooking together over an open fire during camping trips as a teenager. Once he started to cook himself, he says, he fell in love.

“I enjoyed how it brought smiles to people’s faces,” he says. “When you prepared something for them and they enjoyed it, immediately it’s like an instinctive reaction that it brought them a smile, and I really enjoyed that.”

After graduating from Johnson and & Wales with a culinary degree, Van Marter embarked on a storied and successful career across the country. He began in Downtown Norfolk with positions at the Blue Hippo and Sterling’s and eventually moved to Richmond to pursue corporate dining with Aramark in order to learn the business side of the restaurant industry. He became the executive chef for Philip Morris and then moved to Hawaii to work for a university before taking a role as the executive chef for Kona Brewing Company. From there, Van Marter did a stint in Florida where he added sushi chef, kayak tour guide and regional sales manager for Fat Point Brewing to his resume before deciding to give the Eastern Shore a chance.

He admits that, after working in so many flourishing urban environments, a small town can be a struggle at times, but word of mouth has helped people find The Local, and Van Marter now has two servers to help him, as well as another recently hired cook. Another way he has facilitated success in his community is becoming involved with the Cape Charles Farmers Market and meeting the welcoming nearby farmers he does business with daily—Perennial Roots, Copper Cricket Farm out of Machipongo and Island View Farm in Cape Charles are just a few.

“It has really been amazing working with these folks,” Van Marter says. “The first time I approached any of the farmers and said, ‘Hey what do you have going on? I have this place over in Cheriton, and I’m really excited to use your product,’ they just kind of looked at me wide-eyed and were thrown back by it. And they came to me and said, ‘Look you are the only chef that has ever consistently come to us and used our products.’ So they started talking to me and asking, ‘What do you want me to grow for you? I can do this and do that. I told them, ‘I want you guys to do exactly what I do. Grow what you are passionate about, and I’m going to come in and use that stuff and figure it out because that inspires my creativity.’”

Van Marter says he has always had an interest in local food, but what really resonated with him was the relationships he has built from working with the farmers from the Shore, fellow innovations that he feeds off of—literally. His ultimate goal is making The Local 100 percent self-sustainable.

“Part of that is using what’s around your local environment,” he says. “It’s so important to know where our food comes from and to try to sustain ourselves.”

Van Marter also has plans to develop an acre and a half outside the restaurant into growing space, renovate the interior and become a full-service kitchen. While he’d eventually like to open another space in Virginia Beach, he has no plans to leave the Eastern Shore any time soon. In fact, he is now chair of the Visionary Committee for Cheriton, helping with beautification and infrastructure, and will be on the ballot for a seat on the Town Council this fall.

For now, you will find Van Marter most often behind his counter, rolling out a different type of sushi each week (try one with fresh pork belly), coming up with new variations on local oyster dishes or perfecting his Korean barbecue.

“It’s like finding a blank canvas and just throwing paint on it,” he says about what sparks his creativity. “It can be anything that inspires me—from a persimmon sitting in a produce aisle to walking through an Asian store and finding something fermented that I haven’t used before. It’s really interesting how it all just comes together.”

And it’s all coming together in Cheriton.

“I love that this is a small town,” Van Marter says. “I have the amazing opportunity to be involved and have direct influence in the community my children are growing up in.” 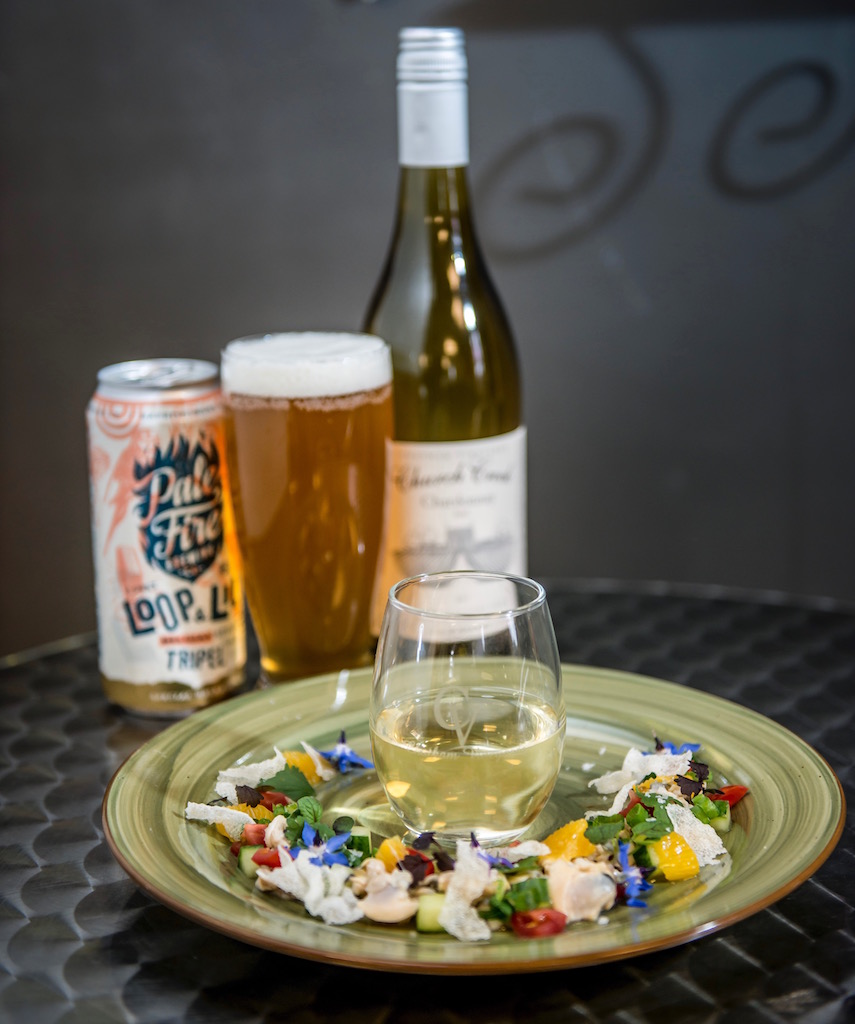