Couple Gets Crafty with Barrel-Art

You’ve heard of the nose-to-tail movement in the culinary world. Mike Prieto applies the same “waste nothing” approach to crafting fine furnishings and accessories from reclaimed wine barrels from Europe and California.

Now that Mike and his wife, Kambra’s, business has surpassed company goals, the couple doesn’t need to squint too hard to see the silver lining of a fire in which they lost everything during a move to Europe where Kambra had been stationed. That catastrophic upheaval sent Mike to the woodworking shop on base in Stuttgart, Germany, to begin to build some of what they lost. There, he credits a “patient master carpenter” with teaching him tool safety, joining methods and much more. But when Mike appeared in the shop one day with a French Oak wine barrel from Bordeaux procured from an area winery, this patient man said, “You’re on your own.” And from then on, Mike was self-taught.

His first creation, a bar—and a freshly minted business degree—became the basis for a startup. Five years ago, back in the U.S., Mike and Kambra opened Barrel-Art. After three-and-a-half years in Norfolk, they relocated their operation to Hampton, where they have thrived for the last year-and-a-half. The Hampton location employs five people and sports a large shop with neatly arranged barrels, stacked floor to ceiling, and massive bins where broken down barrel parts are carefully sorted by type. The air has an enticing nose: slightly oaky and fruity.

When he first got started, Mike would take a barrel apart and let the various shapes and curves inspire him. The growth of the business has left less time for him to “play around” in the wood shop—he spends most days in his office or traveling to shows—but new forms are continually emerging based on custom orders by customer requests because, Mike asserts, “We are never going to say ‘no’.” When he does find some time to work in the shop, it’s “a treat.” 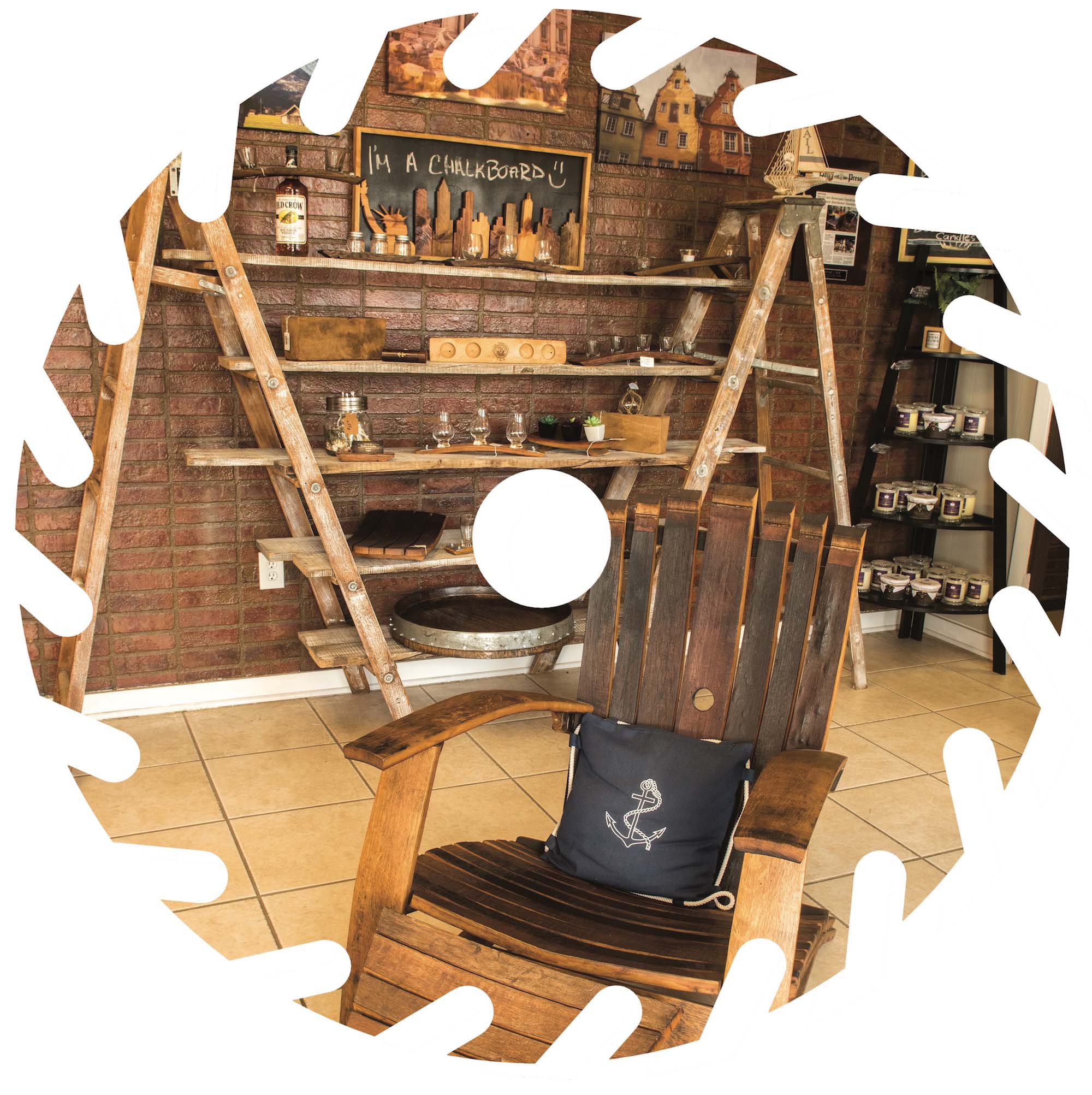 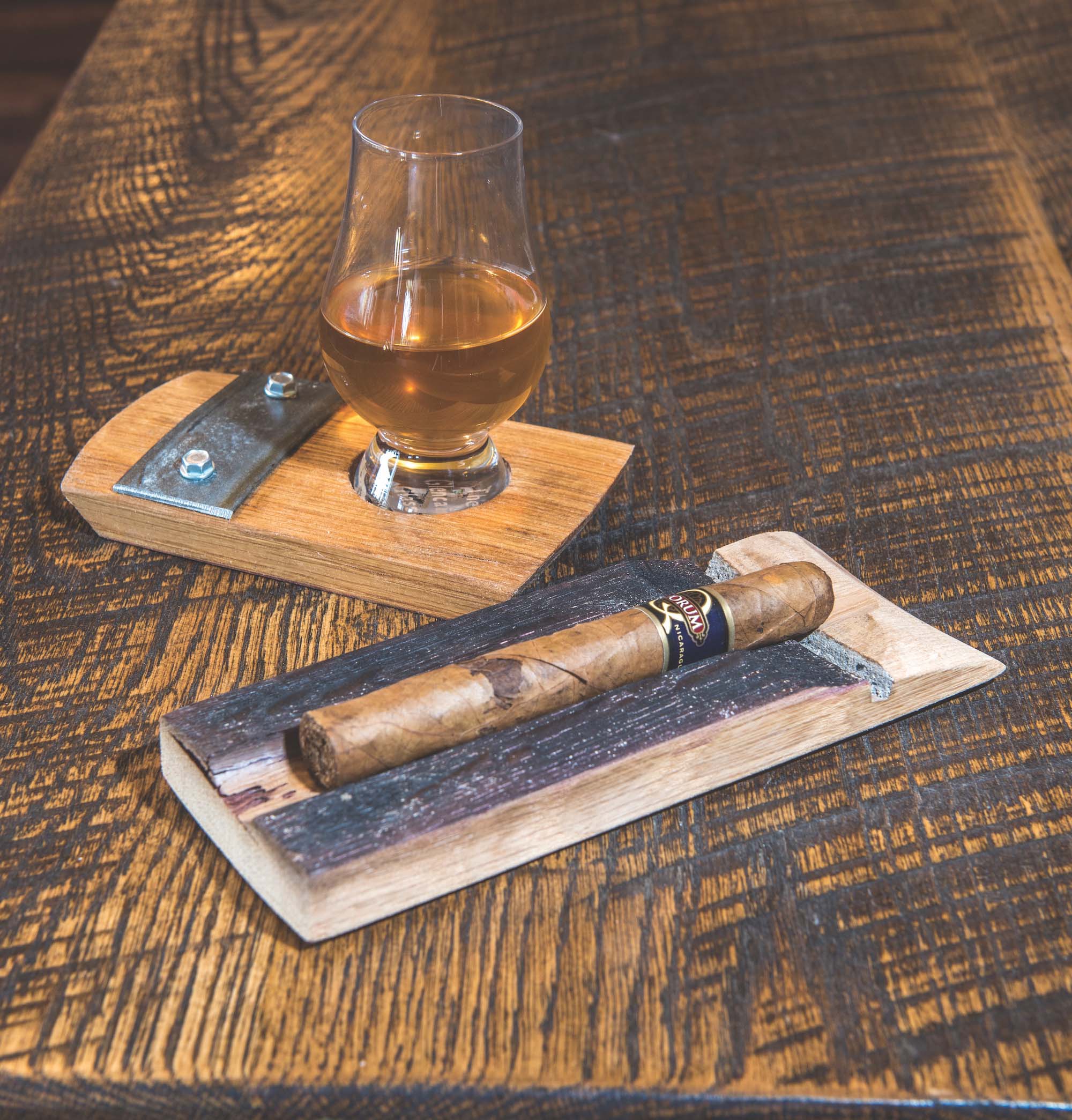 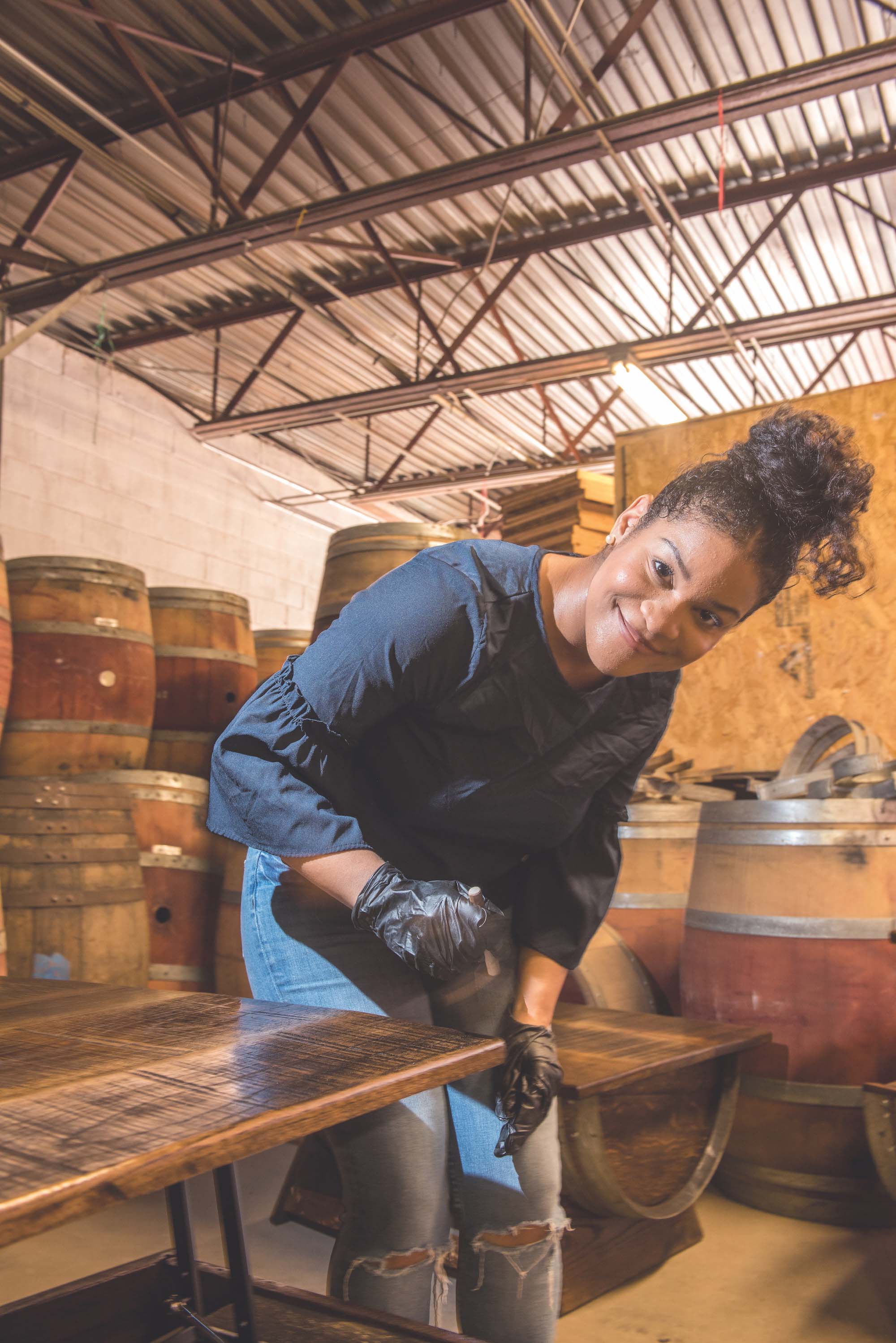 The current Barrel-Art line includes handsome farm and other styles of tables, stools, chairs—including Adirondack—benches, lined fire pits, bars, liquor cabinets, barrel sinks, wine racks, riddling racks, pot and pan racks, single glass coasters, flights with glasses (for wine, beer, bourbon, scotch and whiskey), serving trays, lazy Susans, candle holders, pet beds, raised pet feeders and much more, even barbeque chips, an art easel and luxury writing pens. One pen boasts 24k gold and, at the writing end, a 30-caliber bullet shell, making for a very refined, yet still rustic, stylus. Most items are made from wine barrels, though some from whiskey barrels. However, the interior of whiskey barrels are charred, says Mike, and, because of the sanding required, are much more labor intensive.

Each creation is either stained or left the natural color of the barrel, which, in the case of wine barrels, can be a deep, rich purplish-red color. The piece is then preserved with natural oils hand-rubbed into the surface before being sealed with either an outdoor sealer, polyurethane or shellac, depending on the application.

A favorite liquor cabinet is made from an entire barrel with concealed doors and a lazy Susan shelf inside. A variety of stools incorporate barrel parts in inventive ways; the natural curves of the staves seem made for the human back and bum. One standout employs a barrel hoop as a footrest while a pair of curved sections of hoops connects the seat to the backrest in order to cradle the lower back. Two styles of light fixtures feature either hoops or staves for very current looks and three wall sconces combine both in innovative ways. Pet beds are available in two styles: one is made from the lower third of a barrel and outfitted with a round cushion—perfect for the animal that likes to curl into a ball—and a larger one is made from the entire side of a barrel, laid horizontally and leveled on a pair of feet. 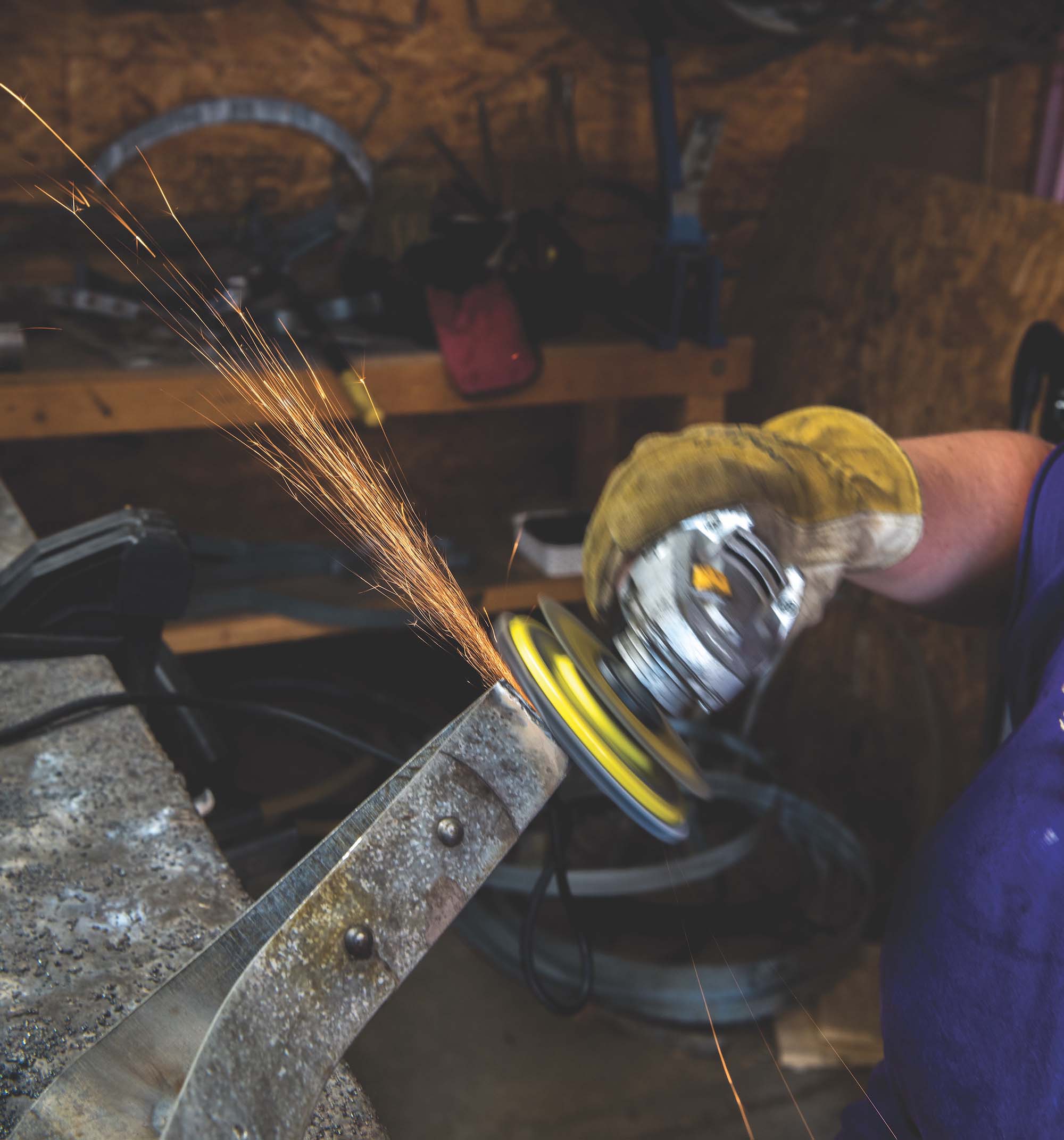 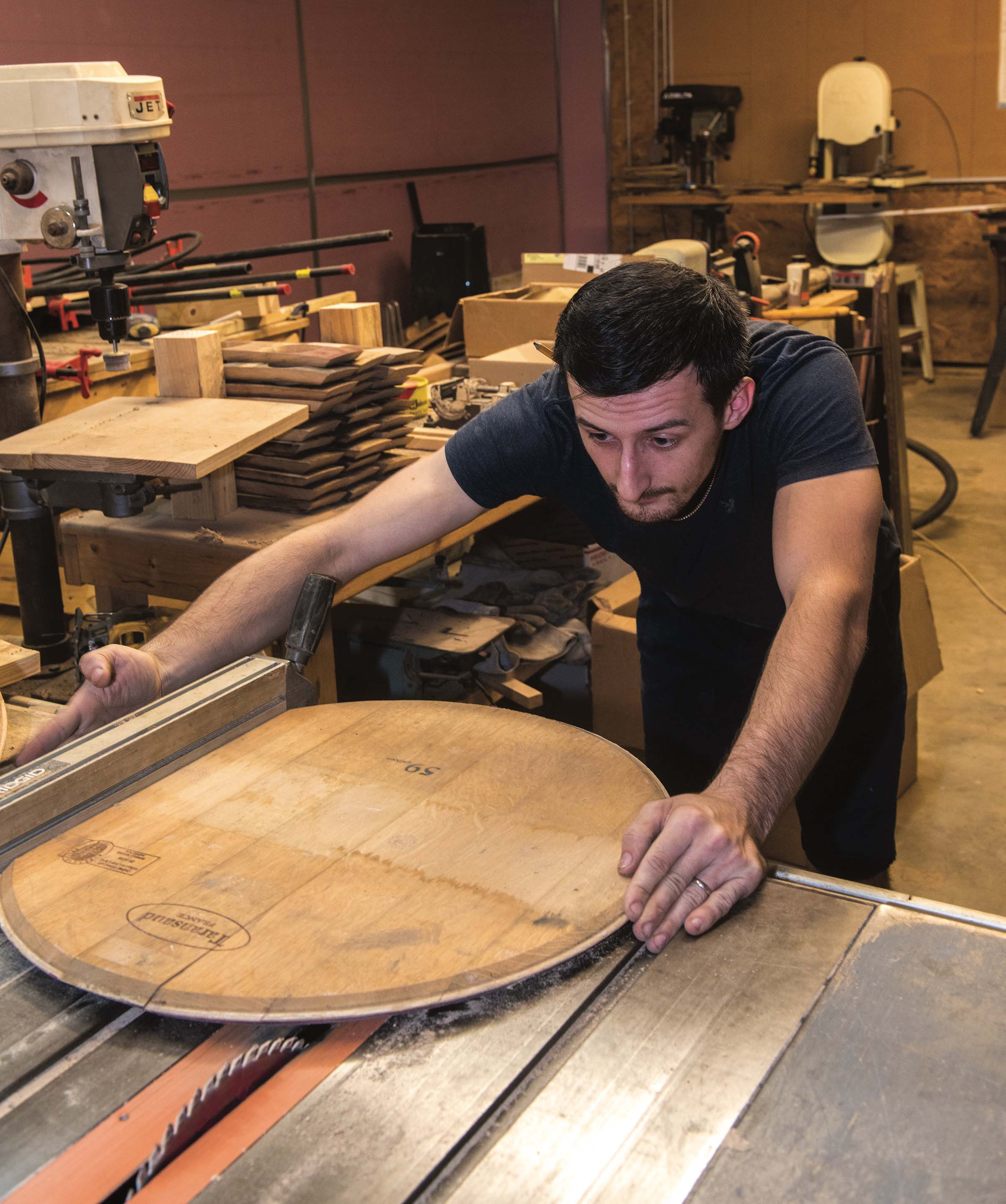 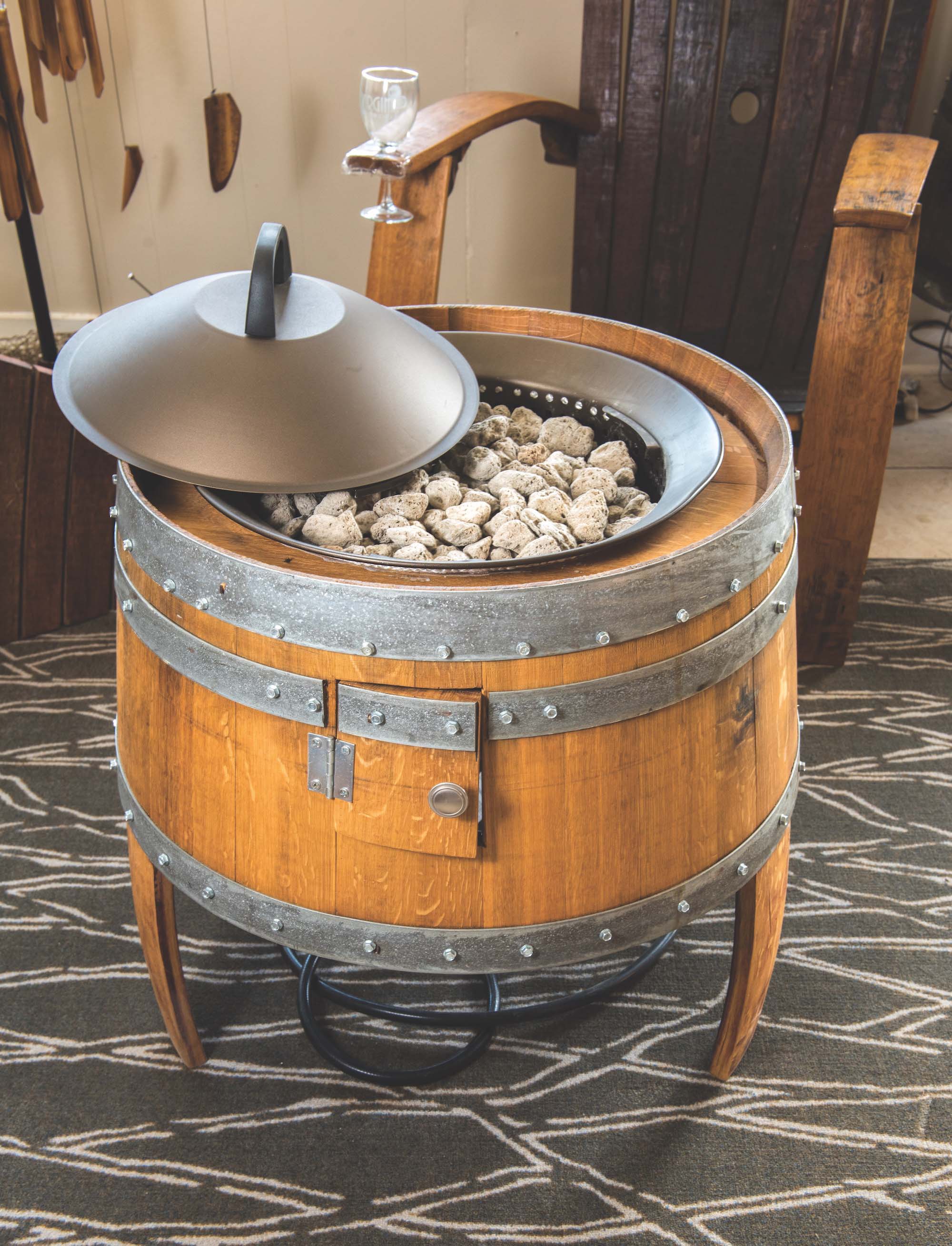 Because the online part of the business has become so competitive due to similar businesses cropping up and sole proprietors opening online shops, Mike made the decision about two years ago to venture into the wholesale market. He recently landed Wine Enthusiast as a prestigious wholesale customer for a line of coffee tables. “It is going to keep us busy,” he acknowledged. To meet the demand, he recently brought on two new people just to handle these orders. Currently, training is focused on insuring that everyone can do everything.

Even Renee Battle, who manages the showroom, builds. An art teacher in Suffolk for a decade, she practiced woodworking in college. The sunny space not only showcases the up-cycled barrel furniture and hoop art in the shape of anchors, fish and sailboats, but items made by regional artists and artisans. Besides food and beverage-related items like bottle openers, the focus is on what Mike feels characterizes Coastal Virginia: the sea and the military. The shop carries items like nautical knot coasters, ocean-themed paintings, wind chimes and butcher block-style cutting boards with contrasting woods that form a flag motif. 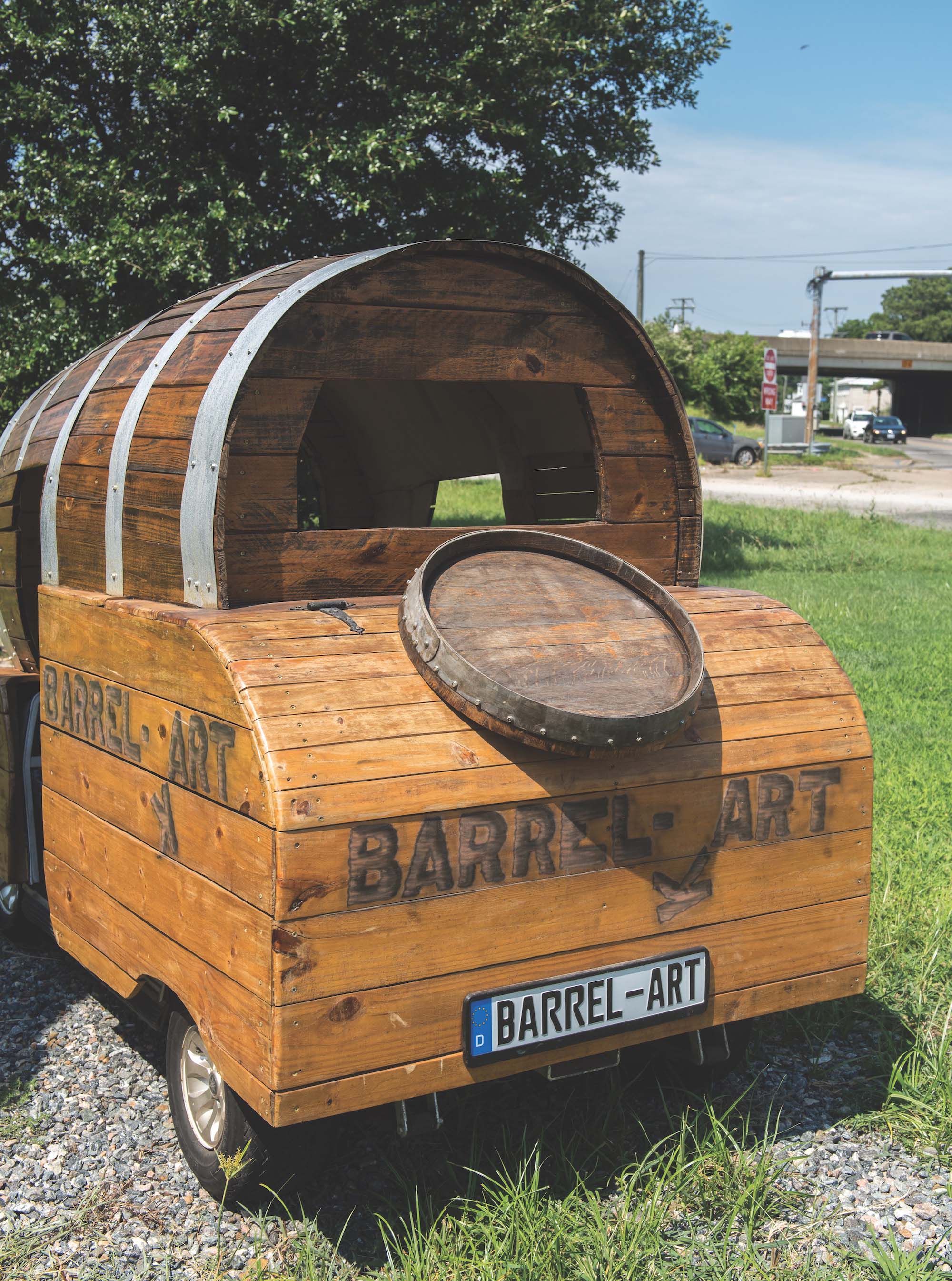 When placing an order, customers are encouraged to pick their own barrels. Tours of the shop are also available. Though Hampton’s Rip Rap Road may not be the first place that leaps to mind when contemplating a home goods shopping expedition, you will know you are in the right place when you spot the whimsical Barrel-Kart, a golf cart outfitted to look remarkably like a barrel.