Under the tutelage of Chef Matthew Greene, every member of the kitchen staff at Charlottesville’s Common House plays a role in the important daily process of making the homemade sourdough. The ongoing routine started a year ago when Greene uncovered a starter left by a previous chef and brought it back to life.

“It’s a team effort,” says Greene. “Everyone makes the sourdough. It’s a three-day process, and everyone knows how to do it. Each step is designated to a specific station, so everyone is responsible for a certain part of the baking of the bread.”

Greene explains that his beloved bread is indicative of the food philosophy at Common House.

“Everything we can make, we do make,” he says, including crème fraîche, ricotta, cheese curds for mozzarella, infinite scratch sauces and more. “Even down to the English muffins that we use at brunch for our Eggs Benedict.”

Common House came to C-ville in 2017 as a fairly foreign concept. Founders Josh Rogers, Derek Sieg and Ben Pfinsgraff wanted to introduce a modern, elevated social club. While the multi-use space opened in the historic Mentor Lodge, one of the city’s first social clubs, Common House has anything but the somewhat stuffy vibe of an outdated country club that some may expect from a membership-based establishment.

This place is more about community than exclusivity—a gathering spot for creatives that includes meeting and coworking spaces and opportunities to experience lecturers and live music and enjoy local art and food. 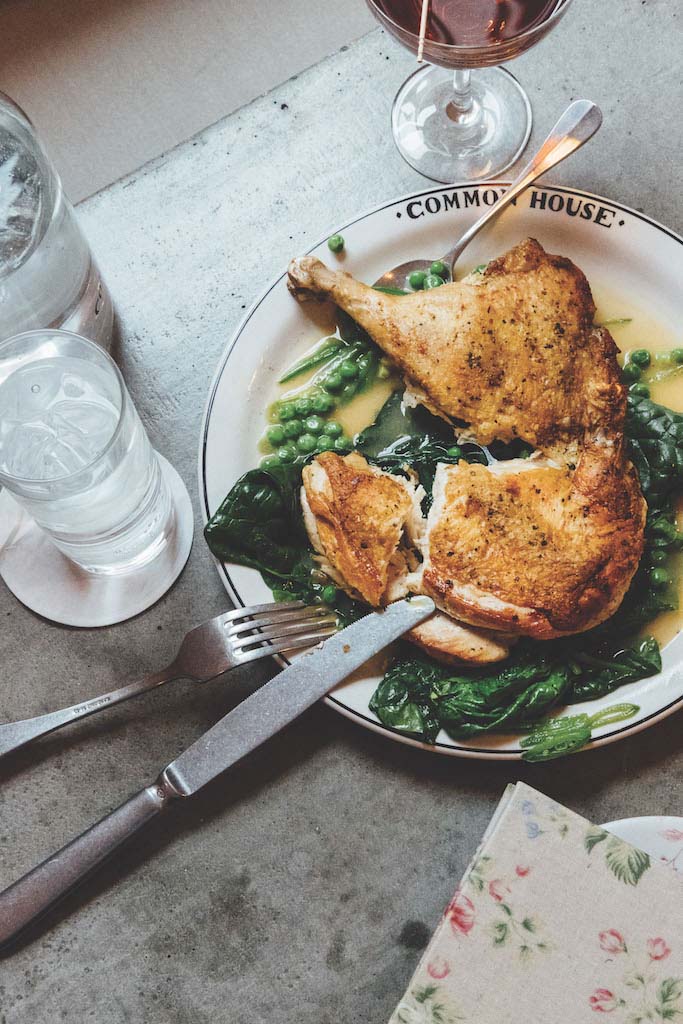 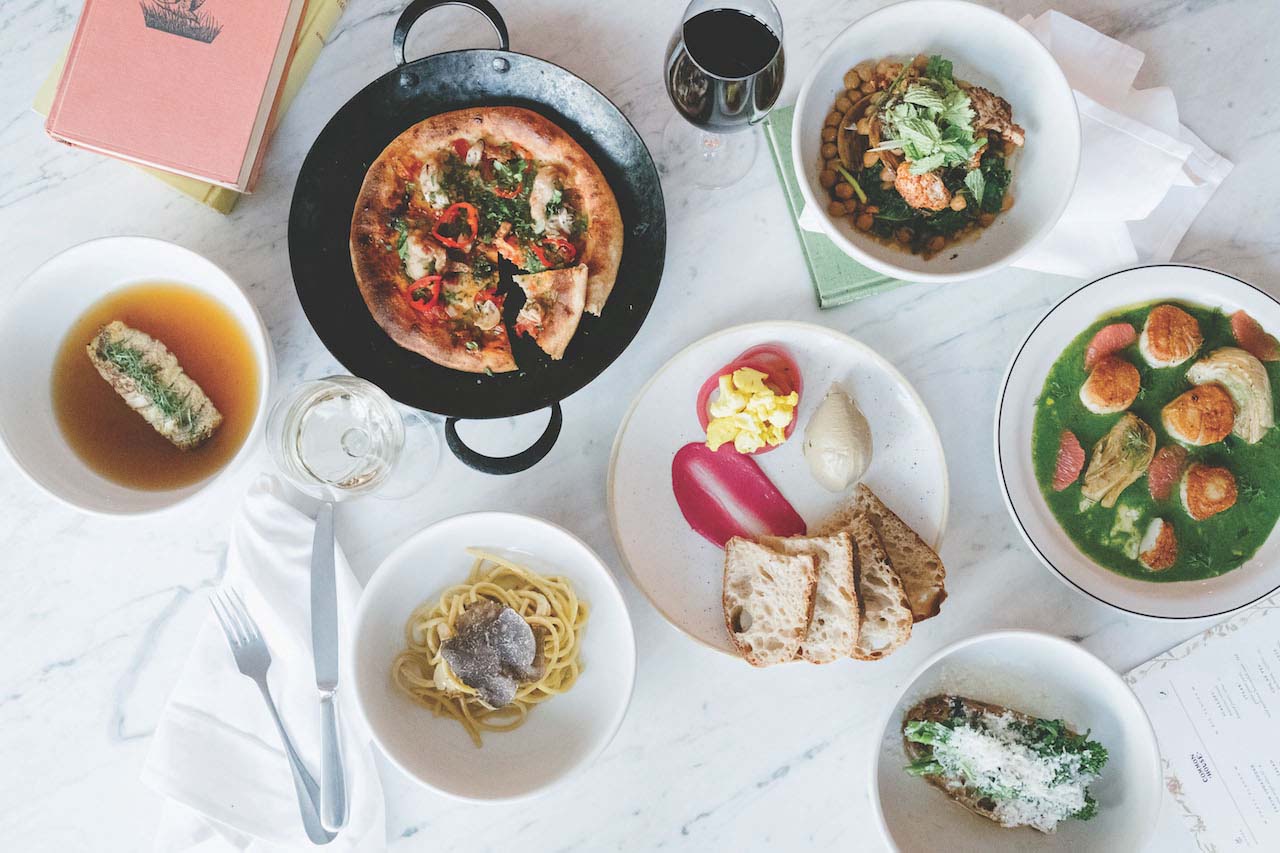 “What we are really shooting for with Common House is be that third space,” explains Greene. “For a long time in this country’s history there was work, home and the third space. Mostly that was church. As that has faded for some people, it’s now the gym or country club or whatever. What we are seeking to do is to offer an alternative for that third space. It’s about the exchange of ideas and being social.”

Of course, another important part of being social to Common House’s 1,000-plus members is breaking bread together. The kitchen aims to produce elevated cuisine in an accessible way using local and seasonal ingredients, something not as common to the traditional club scene, says Greene.

“The food here has to be in line with the entire concept of what we do at Common House, ” says Greene. “Everything is done by hand. The art on the walls is made by local artists and artisans. The seasonality of the cuisine fits in with that. It’s part of the vibe.”

Thankfully, a local food vibe feels comfortable to Greene. Prior to joining Common House as executive chef in January 2018, he ran JM Stock Provisions in Richmond, a whole animal butcher shop where he sourced proteins from local cattle farmers. Eventually, when one of his top beef producers made him an offer to buy the shop (another location still exists in Charlottesville) he accepted because it opened the door for him to dedicate himself to Common House full time. It made sense. He had been consulting on and off with the owners since the early days of the club’s conception in 2015—everything from helping design the kitchen to deciding what the food and beverage program would look like.

“I had an idea of the kind of food they wanted,” Greene says. “It needed to be casual, regional American with a strong focus on local and seasonal. Super rustic and approachable while still using classic technique.”

Greene began honing his own techniques when he wandered into a bistro kitchen in his hometown of Winchester at age 17. A first-time gig as a dishwasher turned into cooking at restaurants throughout college at VCU, finding a French chef mentor who showed him what being passionate about food meant, doing a stint in New York City to see how he “matched up with the big boys,” and eventually finding his way back home to Virginia to settle down with a wife and family.

He also feels at home at Common House. He’s made a few menu changes since he came on board but remains consistent in his reliance on local sourcing. 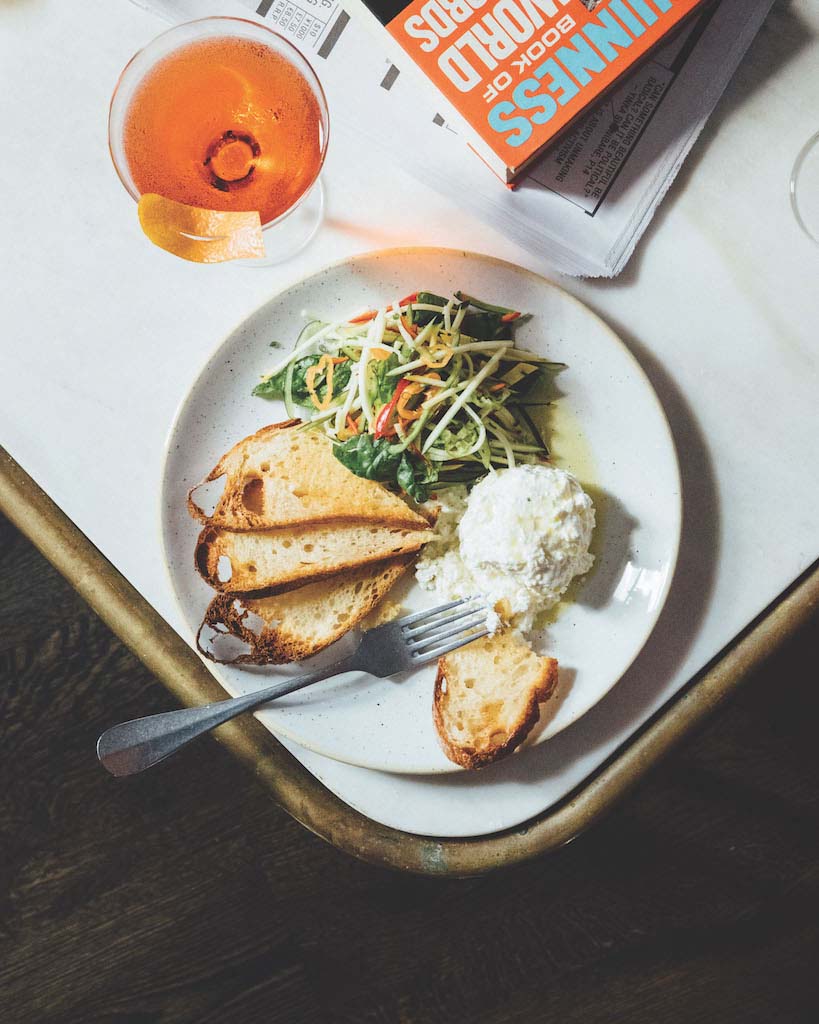 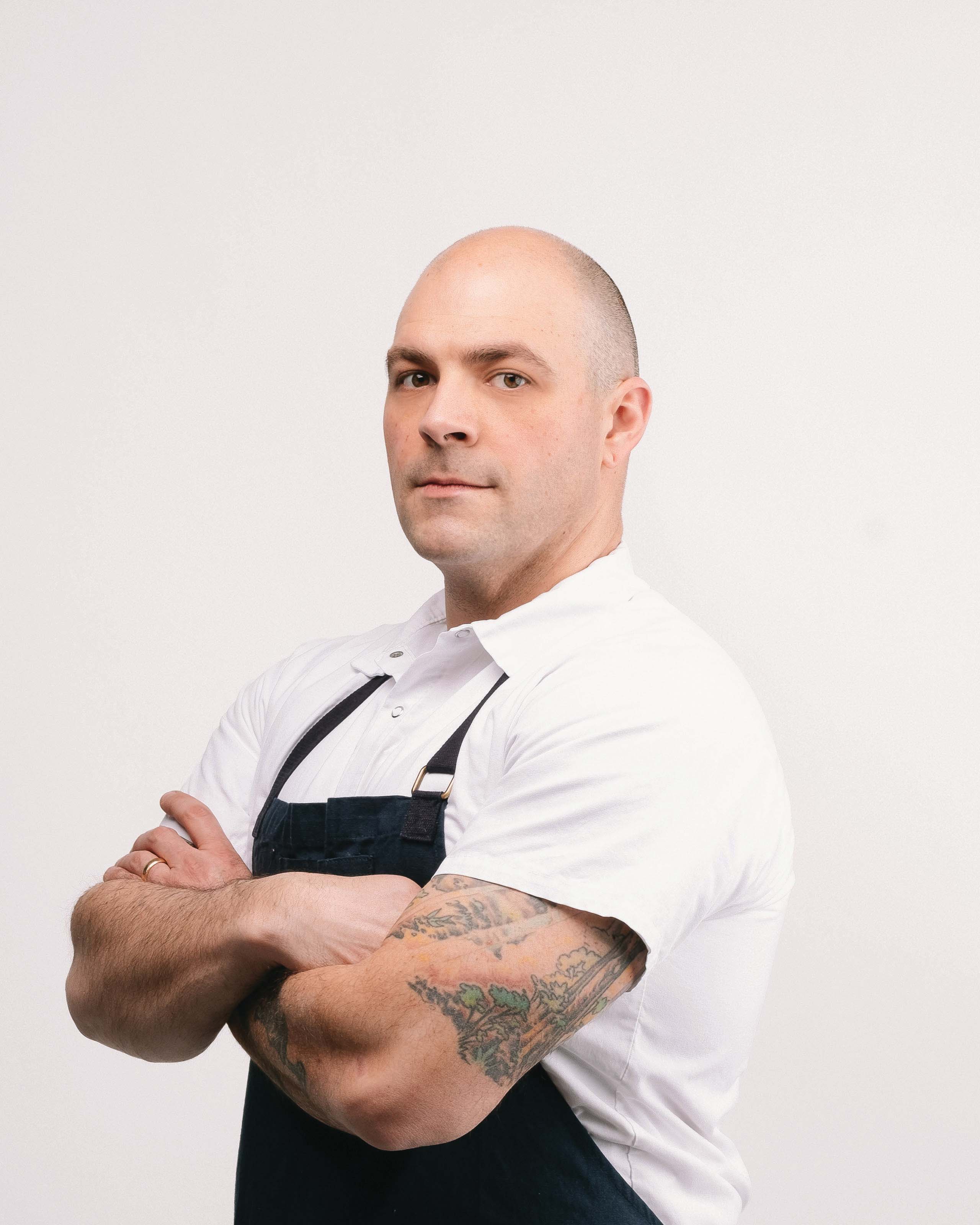 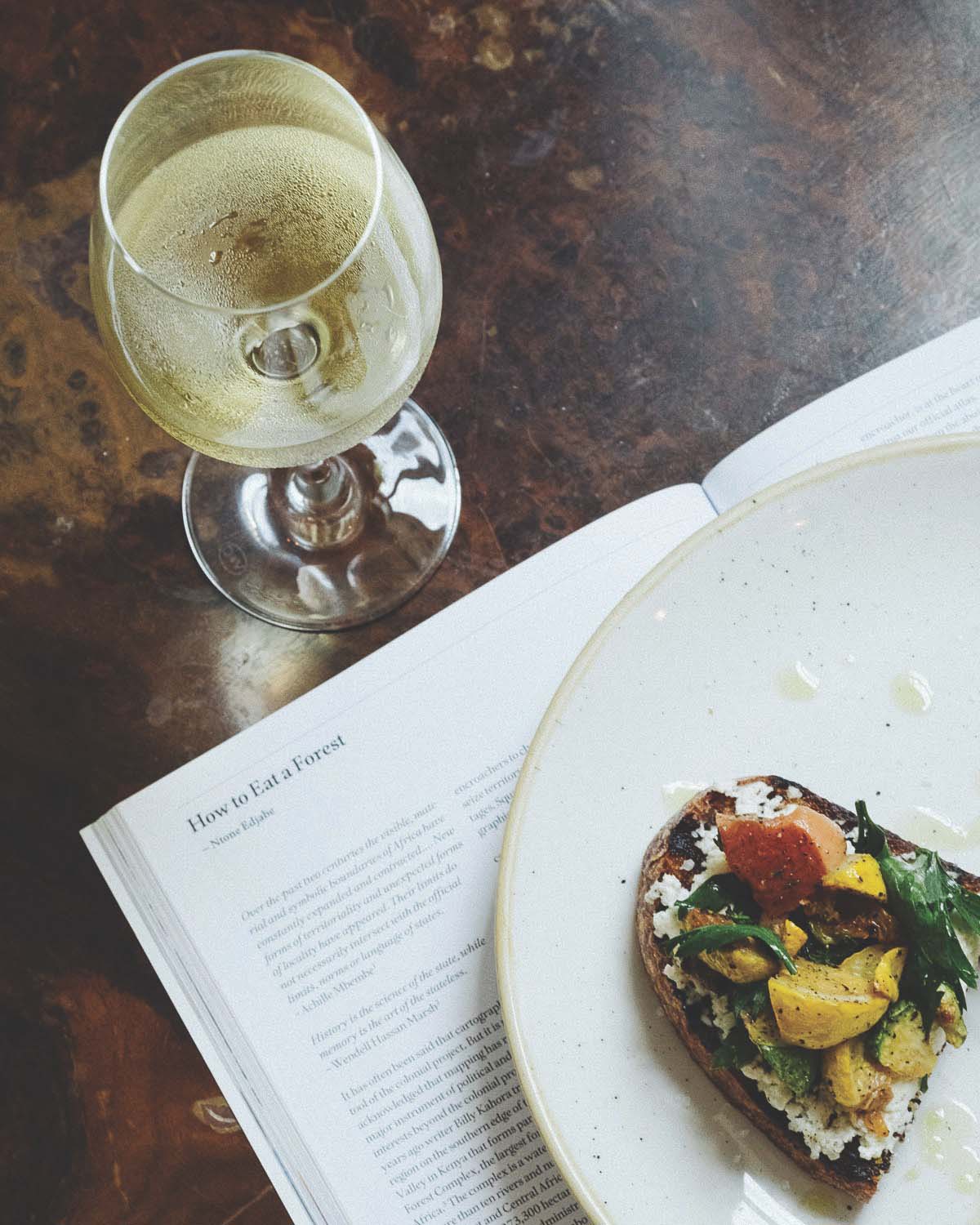 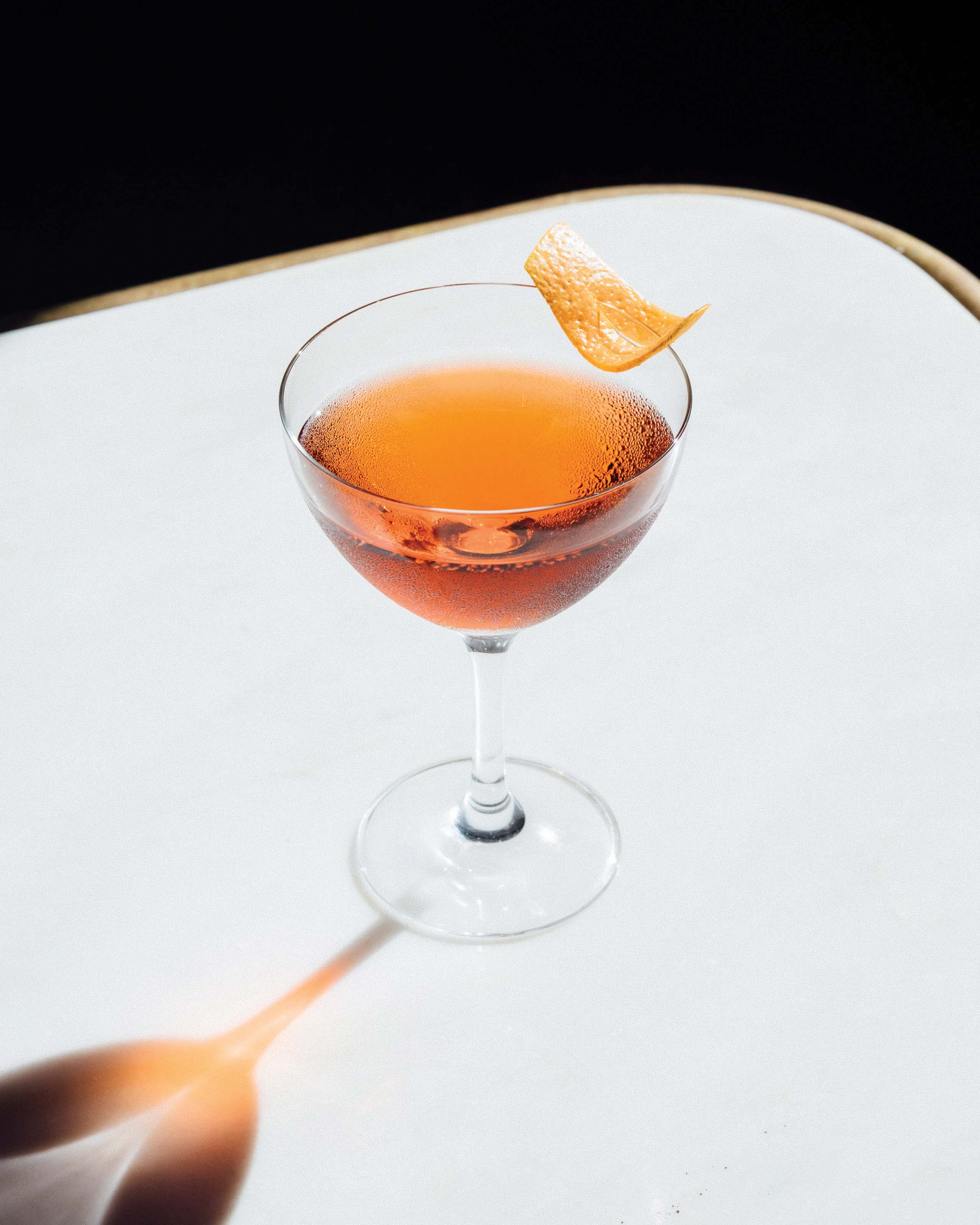 While making sure to keep his food principles intact, Greene says he had to make adjustments to address the cuisine needs of a private club versus a standard restaurant. Common House needs to be more things to more people—a great business lunch, a special occasion dinner, casual fare for a book club meeting and more.

“Because people don’t use the space like a regular restaurant, we are finding we have had to make changes to the menu so that it doesn’t necessarily reflect a regular restaurant menu,” Green explains. “If someone comes in at 4 p.m. at the end of a workday and it’s not quite lunch and not quite dinner, we need to have food that is available to them and that’s easy to nosh on.”

An example is one of Greene’s new menu favorites—housemade (wet cured and smoked) deli ham sliced thinly and served on top of brioche with pickles and butter. This dish he describes as “almost elegant in its simplicity” is now on the all-day menu, along with staples that are always in season like steak tartare.

Tweaks and evolution are normal as the entire Common House team navigates uncharted territory as this type of updated social club community. But one thing Greene says will remain consistent is his sourdough. He has already solidified plans for a pastry section in the kitchen of the next club location in Richmond—slated to open in 2020.

“I like how that has progressed in the C-ville kitchen and that we make homemade bread,” he says. “It’s good. It’s not easy and not especially common, but when it’s done well, it’s great. A goal of mine is that each Common House is self-sufficient in its baking.”

It may seem simple to some, but Greene appreciates that a little dough can go a long way.

“Taking the time, effort and focus to do that will make us successful and make all of us better cooks,” he says. “It’s one more way that we really stand out from everyone else. There may be other restaurants that do better bread, but they don’t do our bread.”

Common House may not be so common after all.

Salt and pepper to taste

Preheat oven to 300 degrees. Season duck legs aggressively with salt and pepper. After letting seasoned duck legs come to room temperature (30 minutes), sear, skin side down, in a hot pan with grapeseed oil until dark golden brown on both sides and remove from pan to rest. Sauté smashed garlic cloves and diced onions on medium heat in the rendered duck fat. When onions are translucent, deglaze the pan with tomato paste and as much chicken stock as your pan will hold.

Place duck legs in a small, oven-safe pan or dish, and pour onion/garlic/stock mix over the top. Use the remainder of chicken stock to just cover the duck legs. Place dry ingredients (allspice, Chili de arbor, bay leaf, coriander, thyme) in a coffee filter, and tie up like a bindle, also known as a saché, and add to the dish. Cover with a lid or tin foil and place in the oven. Braise until knife tender (knife goes into thigh meat with minimal resistance), about 45 minutes–1 hour, pull from oven and let rest in the liquid for an hour.

After the meat has rested, pull legs from the liquid, strain the liquid into a sauce pot and begin reducing on medium heat. While liquid is reducing, pick all the meat from the bones, keeping meat and discarding bones. When the liquid is reduced to a consistency that will coat the back of a spoon, adjust seasoning as necessary. Add picked duck meat and chives to the liquid, and stir until the meat is completely coated with sauce. Spoon meat onto toasted sourdough and serve warm. More herbs can be added to brighten the flavor.

2 ounces peppercorn- and juniper-infused Cirrus Vodka (made in Richmond)
to infuse, toss a handful of peppercorns and juniper berries into the bottle the day before
1/2 ounce Flying Fox Vermouth Blanc (made in Afton)

1 ounce tomato water
smash a Virginia-grown heirloom tomato, strain the juices into a glass, and the juice is your “tomato water”
generous lemon zest and slapped basil leaf to garnish

Stir vodka, vermouth and tomato water over ice until very cold, and strain into a chilled martini glass. Generously express lemon zest on top of the drink, and then slap a locally grown basil leaf and lay on top.

September 13, 2017
Getting to Know Virginia’s Cantaloupes