Chef Patrick Willis describes his mom and dad’s big backyard garden as one of his earliest food memories.

“I specifically remember being 6 years old and sitting under a tree with my mom snapping green beans. You remember these kind of bonding moments with your family, and for me it happened to be around food.”

Armed with the garden-to-table philosophy his parents ingrained early on, it makes sense that this Goochland County native was thrilled to join the staff of renowned Richmond restaurant Lemaire in 2009 just as it completed a major overhaul. After 17 years garnering accolades and serving fine diners inside The Jefferson Hotel, Lemaire unveiled a seven-month interior renovation, new bar and fresh approach—a more approachable focus on locally-sourced food—on day one of Willis’ tenure.

Willis says the restaurant’s shift was new for him as well, but it made sense. “Once you start cooking food from people who are bringing it to the back door because they live right down the road, you get to create these networks of people who are living in your area and bringing you produce and pork and fish,” he says. “It’s really cool to see that in action. That new philosophy that we took on really spoke to me, and I really enjoy doing it.”

A few years before his Lemaire career, Willis enrolled at East Carolina University as a pharmacy student but quickly realized it was not his passion. Because he had worked in restaurants in high school and felt an attraction to food, he changed his major to hospitality management. He recalls being 16 years old when the owner of Tanglewood Ordinary in Maidens asked him to come out to the dining room. “I got an applause because the biscuits I made were so delicious, and everyone was talking about them,” he says. “That sticks in your head. I thought, I can follow a recipe, I have some technique, and people like the food I am cooking. You start to realize you are pretty good at cooking food and think, ‘let’s pursue this.'”

He continued his cooking post-college in North Carolina, and, after meeting his wife, found his way back to Virginia amidst Richmond’s thriving dining scene. Of all his many options, Willis set his sights on working for who he believed to be at the top—Walter Bundy, Lemaire’s executive chef.

“When you really start diving into food, and you really want to be the best you can be, you try to find the best chef to work for,” he explains. “I thought Walter Bundy could teach me to be better, and he did. He really opened my eyes to Virginia cuisine from his point of view.”

His perseverance paid off. After spending two years as a line cook at Lemaire, his mentor promoted Willis to sous chef, where he spent five years honing his skills. Then came what Willis calls “a shocker.” In 2016, Bundy announced he was exiting to start his own restaurant and leaving Willis in charge.

“I was honored,” he says. “Being the chef at Lemaire is a very good job when it comes down to cooking in Richmond.” 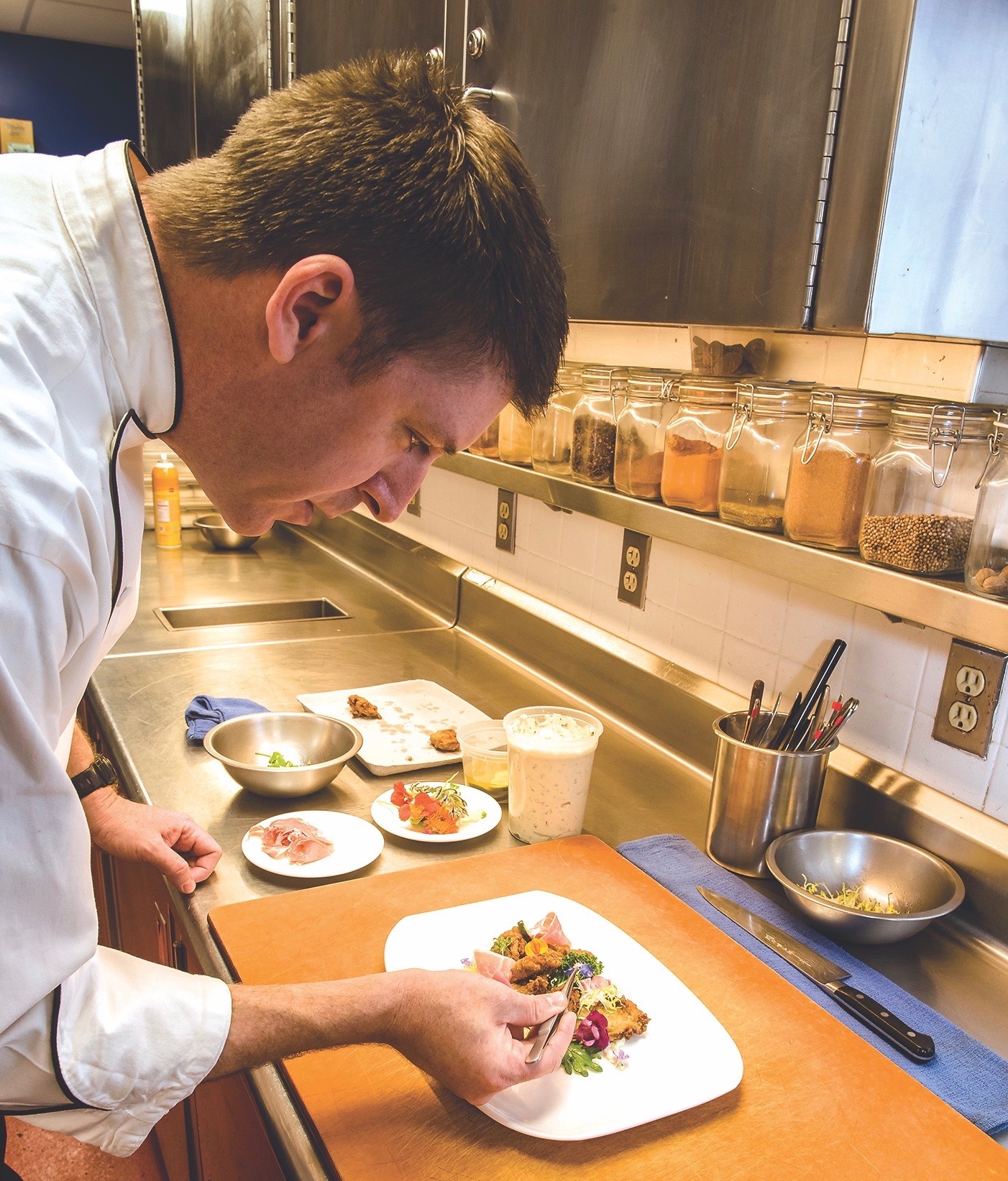 Since taking the helm as executive chef, Willis says it has been important to maintain the restaurant’s goal of being a premiere Southern destination restaurant while also creating original recipes and putting his own spin on the menu.

“We are very fortunate to have the Chesapeake Bay and also be so close to the Shenandoah Valley,” he says. “It’s just a thriving area to work in. Being between the ocean and the mountains, we get a lot of fresh, locally-sourced items.”

Some of Willis’ favorite food items to work with are rockfish and oysters from Big Island Aquaculture in Gloucester, a farm right on the water. “I like working with people who are involved with the product,” he says.

He uses the Big Island oysters at Lemaire to pay homage to a family recipe. When he took over as chef, Willis asked his aunt how she breaded her oysters.

“I always loved eating her fried oysters, and she said she has only ever used cracker meal,” he says. “I thought it was a good idea and put it on the menu.

Willis shares that this recipe is “very close to me because of the family ties, and it really represents Virginia. It’s very popular at the restaurant.”

He hopes that dishes like these—along with the entire Lemaire experience—really resonate with his guests.

“One thing we do exceptionally well here from the moment you walk into the hotel is exceptional service in a beautiful dining room,” he says. “I have always tried to make sure the food as nice and as beautifully presented as the room you are eating it in. It has to taste great and look great. The whole package is what I want people to leave here with.” 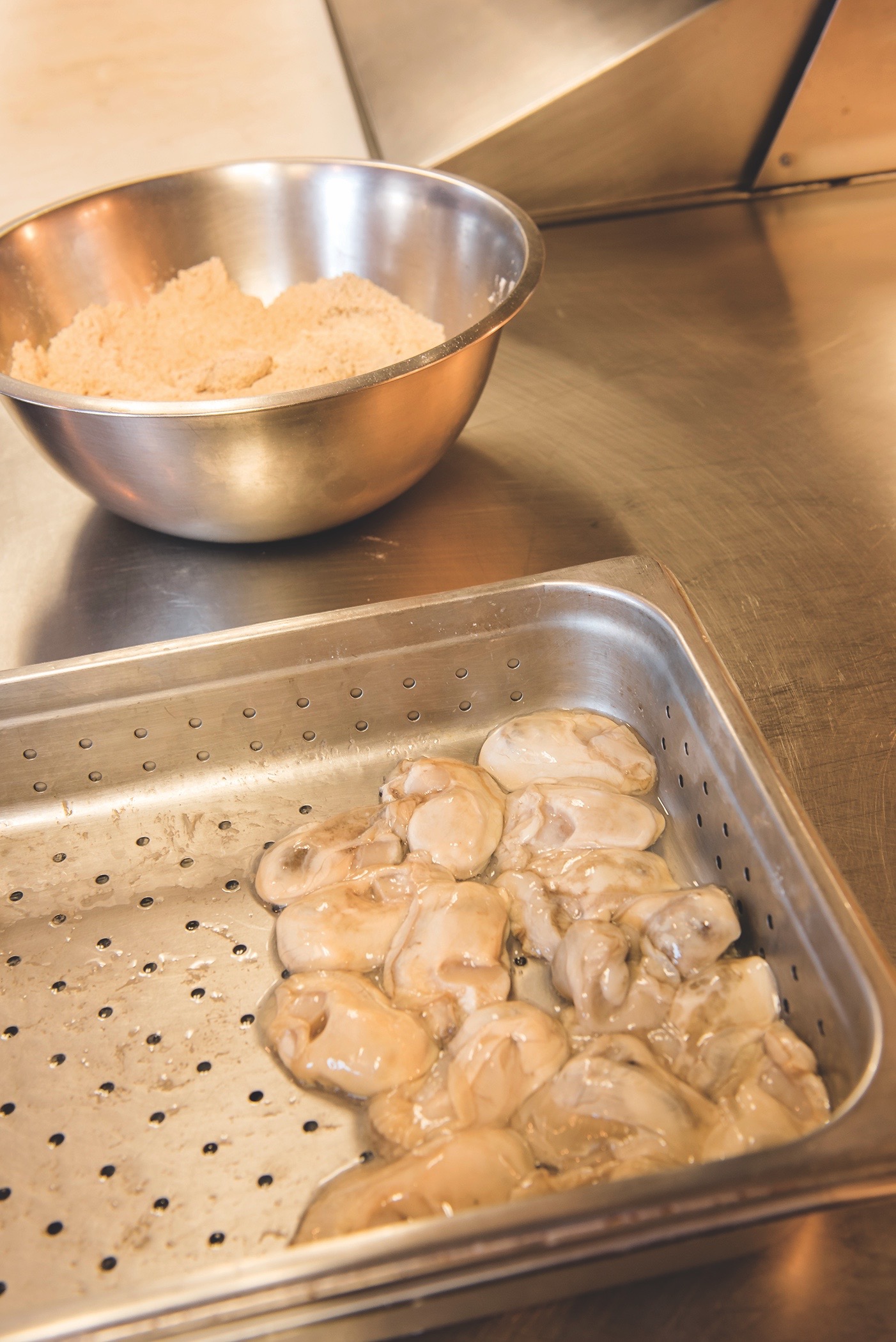 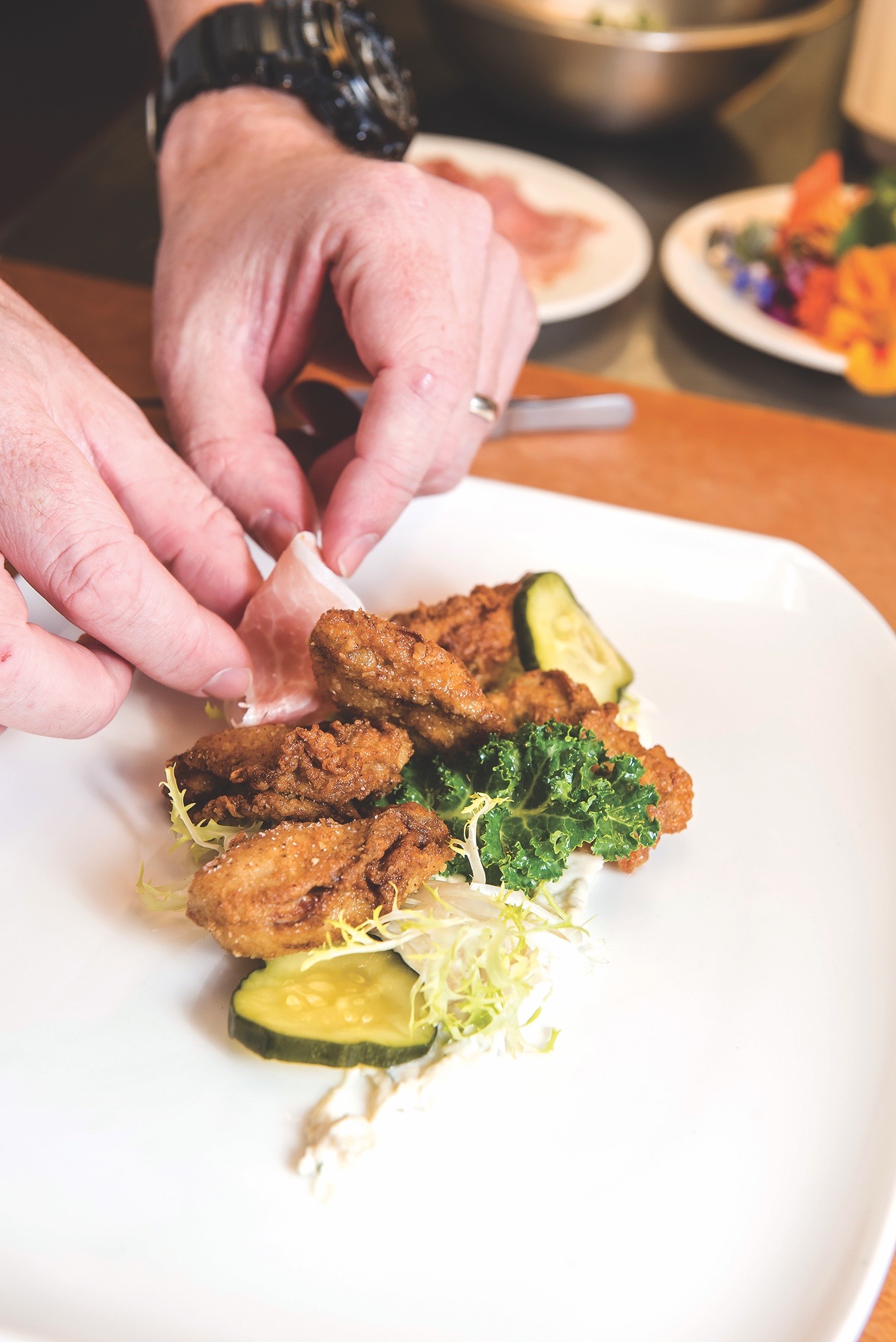 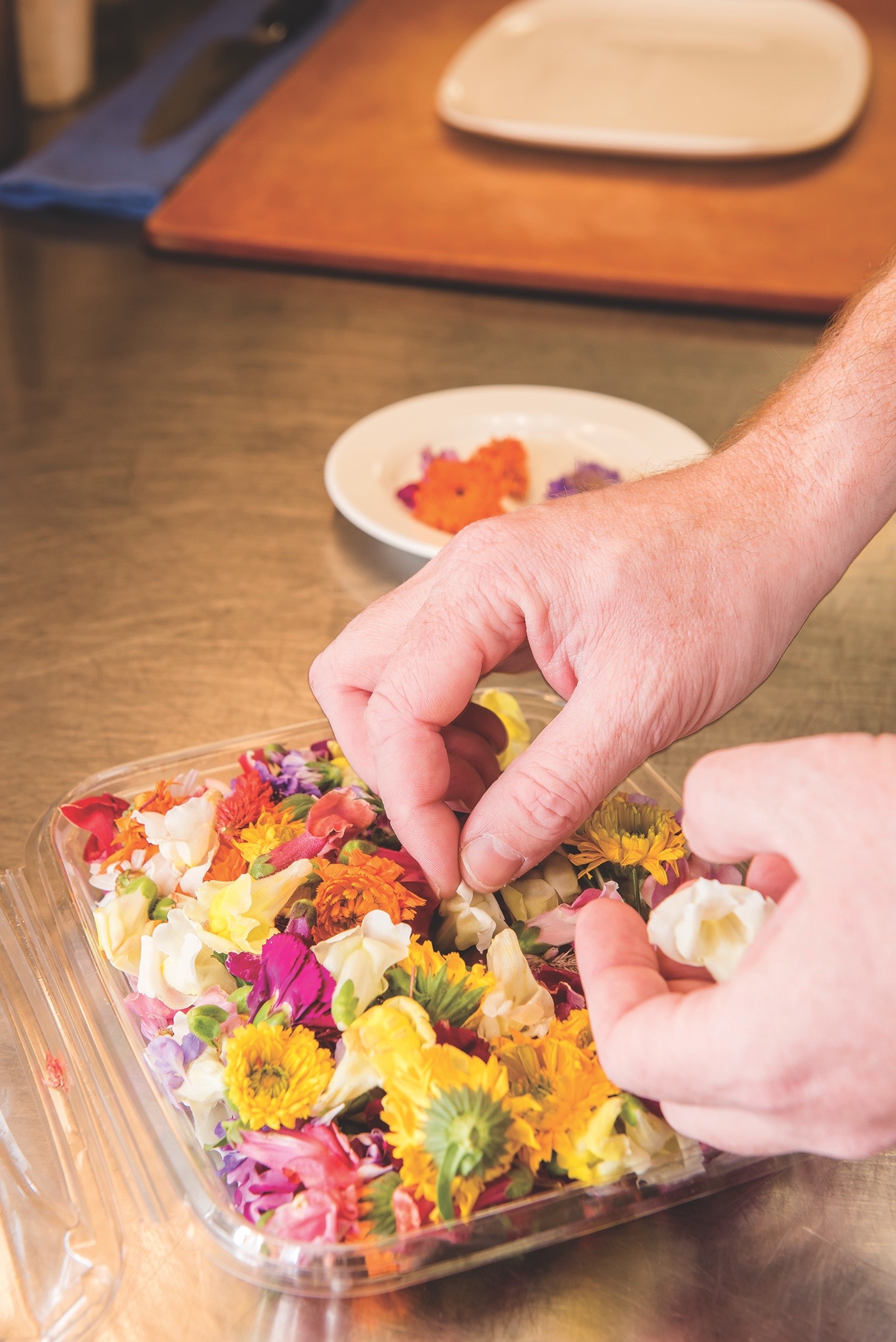 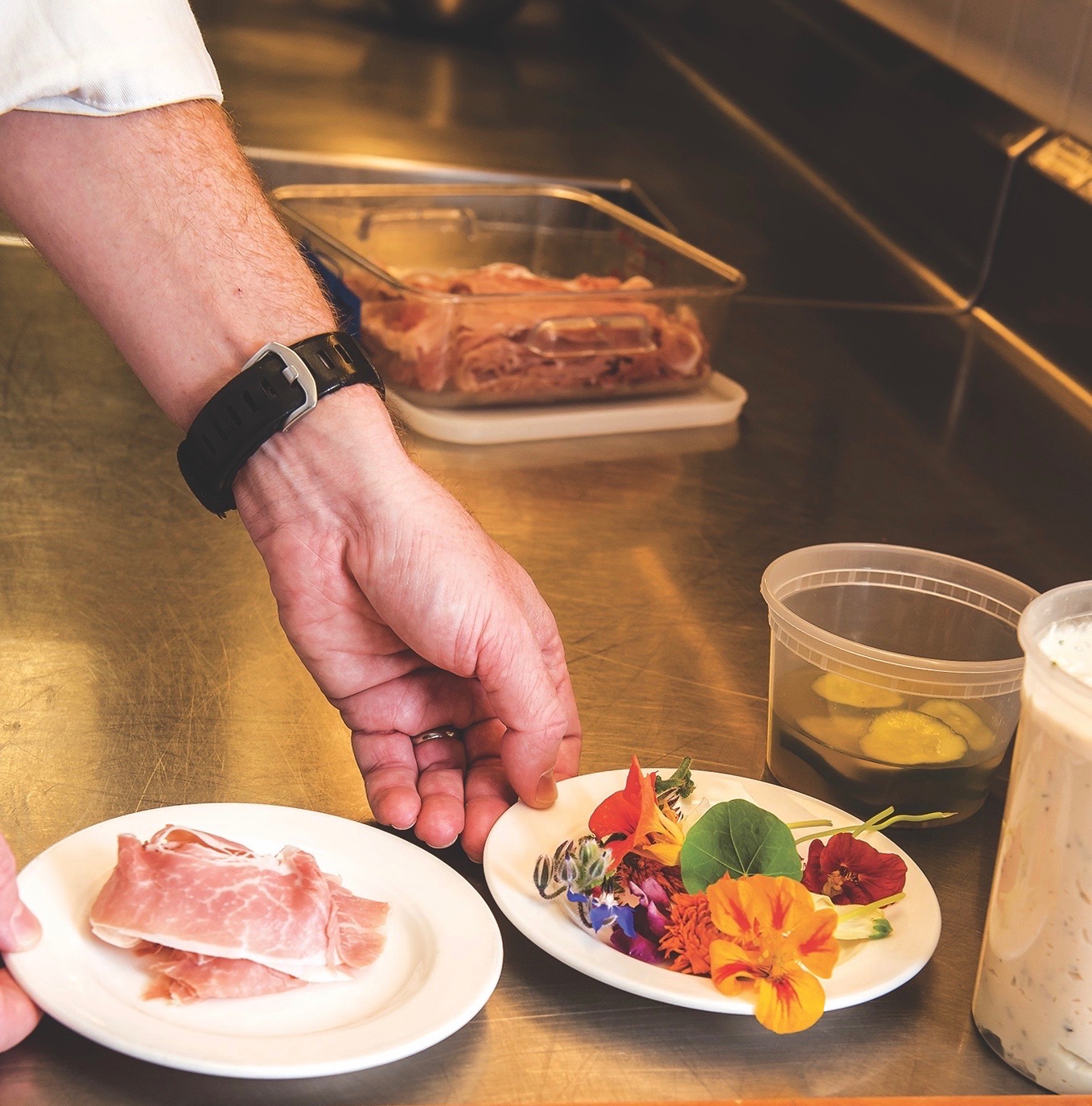 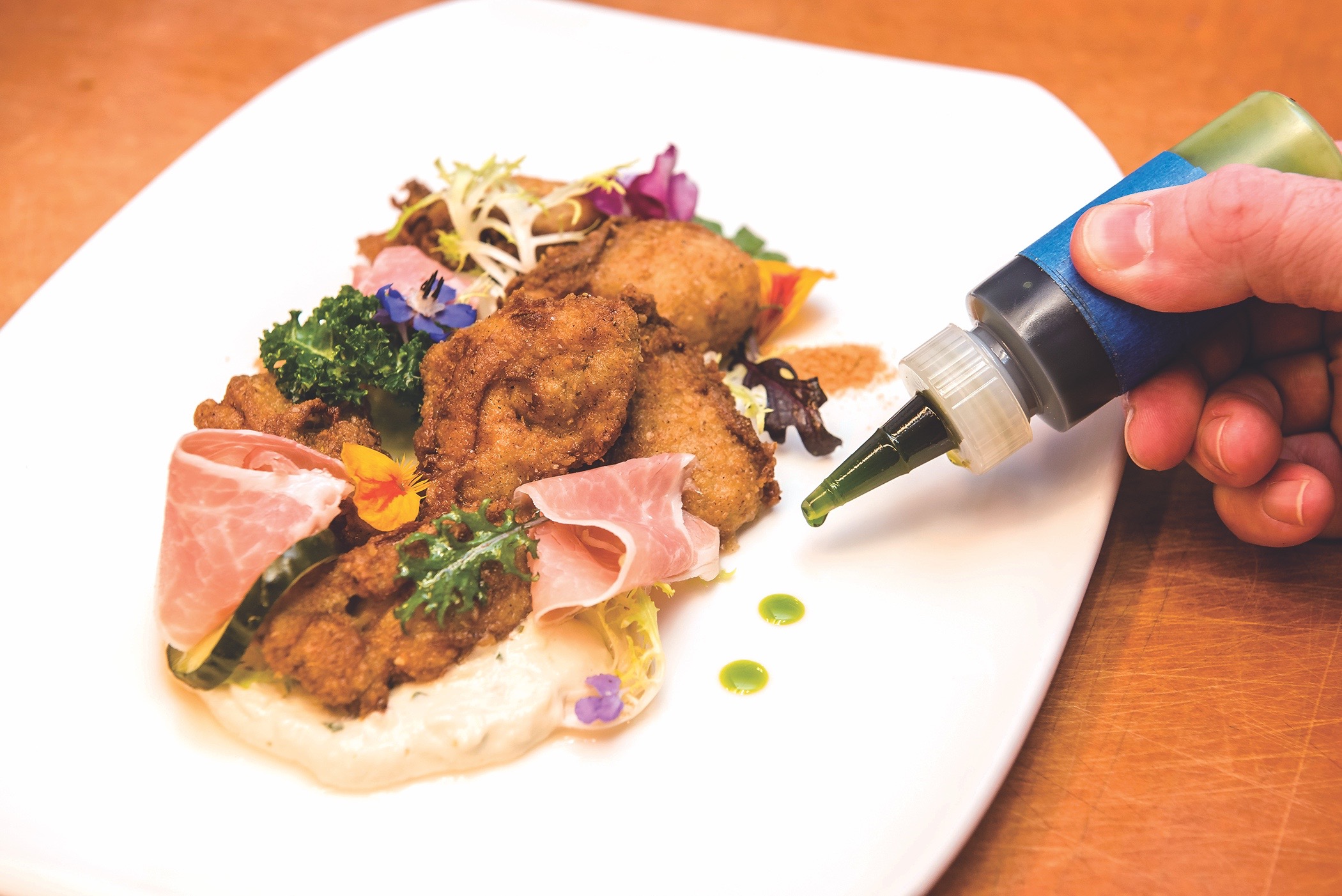 “In order to make your food taste incredible, it is imperative that you purchase the best quality oysters you can find,” says Chef Patrick Willis of Lemaire. “At the restaurant we use Big Island Aquaculture Oysters from Gloucester, Virginia, which have a wonderful balance of sweet and salty. These oysters are fried and served with Edward’s Smokehouse Country Ham, Bread and Butter Pickles and Sauce Gribiche.”

Combine all ingredients in a bowl and mix together. Store in an air tight container.

Wash and dry the cucumbers. Slice them into rounds, making sure to discard the blossom end. Salt the cucumbers and place in a refrigerator overnight. The next day, rinse the cucumbers thoroughly under running water, being careful to remove all excess salt. Combine the vinegar, sugar, water, mustard seed, celery seed, turmeric, red pepper flakes and onions in a large pot, and bring to a boil. Add the rinsed cucumbers, and simmer for 8 minutes. Allow them to cool in their brine for 12 hours. Store in refrigerator for up to two weeks.

1 large Yukon Gold potato, cooked and processed with a food mill, and cooled in the refrigerator

Place all ingredients in a bowl and mix together. Serve chilled.

Preheat your fryer to 350 degrees. Shuck 24 oysters, and toss them directly into the cracker meal breading. Shake off any excess breading, drop the oysters into your fryer, and cook for 1 to 2 minutes or until golden brown. Remove the crispy oysters, and allow them to drain on a paper towel.

While the oysters are draining, place some of the sauce gribiche onto your serving plate. Transfer the oysters to your plate directly onto the sauce. Arrange a few shaved slices of country ham and pickles on the oysters, and garnish with fresh brassicas or herbs from your garden. 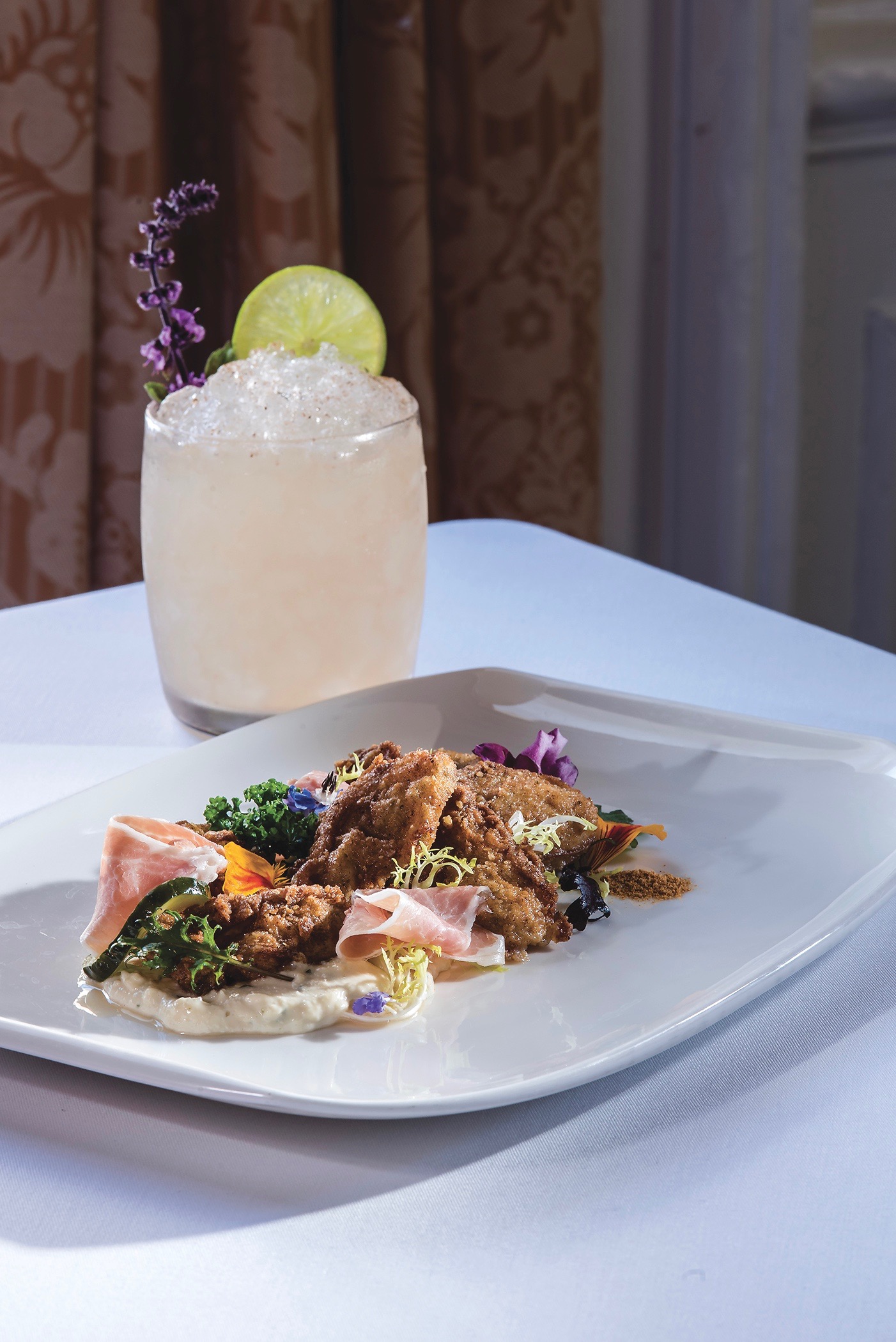 Chef Willis recommends pairing Lemaire’s Cracker Meal Crusted Oysters with their Downriver cocktail. Here’s how to shake it up:

Shake and serve strained over crushed ice. Garnish with a lime wheel and an edible flower.

June 15, 2017
Getting to Know Virginia’s Cantaloupes

September 13, 2017
Farm Dinners are Thriving Across the Commonwealth

Farm Dinners are Thriving Across the Commonwealth