Unique boutique hotel—first opened in December 1910 as the First National Bank, a French Renaissance-Beaux Arts building–opens to guests in Roanoke

Photos courtesy of The Liberty Trust

As you enter the grand hotel lobby of The Liberty Trust in Downtown Roanoke, it’s clear the building was formerly a bank. A vault is open at the end of the long lobby, which was once lined with teller windows. Soon, the teller spaces will likely serve as a bar and restaurant. But this unique property is already a must-do for those looking for a historic getaway in the Star City.

The newly renovated boutique hotel opened to guests in mid-March after painstaking efforts to preserve as much of the history of the structure as possible. “We really tried to repurpose everything we possibly could,” said Rebecca Heefner, director of sales for Savara Hospitality, which owns the building. 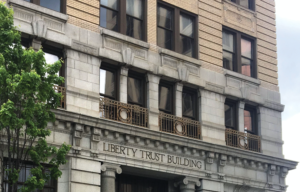 When the building first opened in December 1910 as the First National Bank, the French Renaissance-Beaux Arts building was called a “Temple of Finance” by a local newspaper, and it remained a bank for nearly 100 years. The building was designed by John Kevan Peebles, considered the “dean of Virginia architects” during the early part of the last century. Peebles served on the architectural committee for the restoration of Virginia’s State Capitol in 1902 and the board of design for the Jamestown Exposition in 1907. He was also chair of the architectural committee for the University of Virginia.

The lobby is graced with soaring ceilings, chandeliers and Doric marble columns. A giant clock sits above the vault, and though the new owners could not find anyone to repair it, it’s still impressive, as are the giant Roman numerals for 1909, the year the building was complete. The original green marble and granite and much of the flooring was left intact, as required for tax credits for a historic renovation. The copper-clad doors, which now grace several of the 54 hotel rooms, are likely the only ones of their kind in Roanoke.

When the bank was built, electricity was relatively new to the city and made the seven-story skyscraper possible with the installation of elevators. During a tour of the hotel, Heefner said her favorite historical gadget is an on-off light switch composed of two buttons.

The much-anticipated opening of the new hotel received recognition from Forbes magazine, which in December of last year named The Liberty Trust one of eight hotels in the country to consider for travel and business. 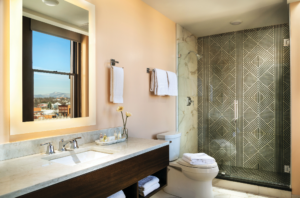 Much of the national and international attention to the renovation was thanks to the Salvage Dawgs’ DIY Network show, which was created by Black Dog Salvage, a Roanoke-based salvage and repurposing firm.

In 2019, prior to the renovation of the building, the Salvage Dawgs’ crew filmed an episode at the Liberty Trust for Season 11, their final season. The crew explored the building from roof to basement to find and remove architectural elements such as plumbing, lighting fixtures, and two dangerously heavy safe doors, which weighed nearly 1,000 pounds apiece.

“We harvested some cool stuff,” said Mike Whiteside, CEO and co-founder of Black Dog Salvage, adding they wanted to harvest a lot more items, but tax-credit requirements didn’t allow it. He said the best items were some in-ground urinals, which might be used in period-piece movies. Black Dog Salvage used the decorative parts of one of the safe doors to build a small consult table, and Whiteside said he would like to build a second, slightly large consult table for the front lobby of the hotel.

Two of the original six safes were left in place, though only one is visible to the public. The safe will become a tasting room and be used as a private event space, and guests can already enjoy an espresso there.

As guests wait for one of two elevators, they can see the original U.S. mailbox mounted in the wall to the right. Letters can still be posted from the seventh floor down via a chute, and according to Heefner, the mail is picked up daily. 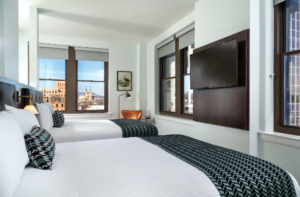 The Liberty Trust rooms, which once served as offices, come in six different configurations, Heefner said. They range from Petite Queen rooms, which span 200 square feet, to Deluxe King rooms, which span 500 square feet. Each room features an old-fashioned teller lamp and telephone, as well as a copper mirror on the backs of the doors for a historic feel among the comfortable beds and spacious bathrooms. “A lot of the rooms are oversized and quite luxurious,” Heefner remarked.

From the windows of the 54 rooms different iconic Roanoke structures can be seen, including the Roanoke Star on Mill Mountain, the Hotel Roanoke, and the Taubman Museum of Art. During a recent stay, my husband and I were rewarded with an incredible view from our third-floor window of a full rainbow in the afternoon. We also enjoyed the view of a lovely sunrise that highlighted the mountain-like architecture of the Taubman Museum, where we headed for a morning visit.

Located at the corner of Jefferson Street and Salem Avenue, the hotel could not be more convenient to those visiting downtown Roanoke. The historic Roanoke City Market, one of the oldest continuous markets in the country, is a short walk from the hotel, as is Center in the Square, which houses science, art, and pinball museums, as well as the Mill Mountain Theatre.

Many established restaurants are nearby, including Alexander’s, which is literally next door and offers fine contemporary dining. On our visit, we enjoyed shrimp etouffee and scallops, with a decadent chocolate pudding cake as a perfect dinner finish.

Heefner noted that when The Liberty Trust bar and restaurant open in the coming months with cocktails and small plates, “We hope to be the before-and-after place where people hang out.” 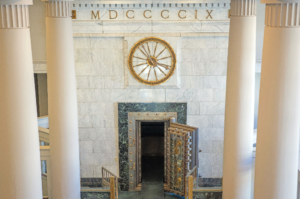 The original First National Bank opened the day after Christmas in 1910 and was the first financial institution to be founded in Roanoke. The bank facilitated the commercial transactions of the Shenandoah Valley Railroad, forerunner of the Norfolk & Western Railway. Roanoke is still a busy railway hub, and though the tracks are only a block from The Liberty Trust, the well-insulated building kept us from being disturbed by nighttime trains during our overnight stay.

In the years that followed, the Liberty Trust building was home to a number of financial institutions including People’s Federal Savings and Loan, and in the 1980s, it began serving as office space for a number of companies.

Savara acquired the building in 2018 and began construction at the end of 2019. COVID-19 required a pause, but construction restarted in January 2022 with a remarkably quick turnaround.

Most of the key project participants in the renovation are local businesses. The general contractor is R.L. Price Construction, which is based in Salem. Architect Robert Pilkington of Roanoke’s Balzer & Associates worked with the developers on the renovations of the building. Hill Studio was a consultant on historic restoration and preservation. The project was financed locally by Roanoke-based Freedom First Credit Union.

The Liberty Trust Bank Building is on the National Register of Historic Places and is a Virginia Historic Landmark. The Liberty Trust hotel is the only member of Preferred Hotels & Resorts in Virginia’s Blue Ridge—and one of only six in the state of Virginia. Savara also operates the historic Linden Row Inn in Richmond, Virginia, and the Meadowbrook Inn in Blowing Rock, North Carolina.

June 17, 2019
Oyster Academy at the Tides Inn is Delicious Fun

A Feast for Foodies in Bath County