If Thomas Jefferson were alive today, he’d likely be breaking bread, drinking wine and enjoying dinner conversation with David Bastide. Not only did Bastide grow up in TJ’s beloved France, but the two men also share the same food philosophy. 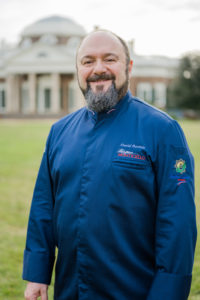 “Thomas Jefferson was very avant-garde, especially for his time,” says Bastide, who recently became executive chef at Monticello Farm Table. “He researched and pushed boundaries, and I want to do the same. I want us to be known for a place to have a great meal, to have conversations about what is going on in the world, and to see how we can make it a better place.”

Jefferson would probably feel satisfied knowing like-minded Bastide is now overseeing the cuisine at Monticello, once Jefferson’s primary plantation. Bastide says he wants Monticello Farm Table to include a menu that acknowledges the contributions of the enslaved chefs and gardeners at Monticello, who grew and prepared the food for Jefferson’s table, such as James Hemmings, Jefferson’s enslaved chef who was trained in France.

“As Jefferson envisioned, I want Farm Table to be about local produce, sustainability, seasonality,” Bastide says. “I want the vegetables to shine, with a little meat, as Jefferson would say, to be used as a condiment. I want guests to relax and enjoy a menu that features ingredients they can find growing in the ground in the gardens.”

An affinity for produce stems from Bastide’s earliest food memories of shopping with his grandmother in the outdoor markets in France. He says his family played an important role in his culinary journey.

“I truly think my ‘career’ started when I was a little boy following my Uncle in the kitchen,” he describes. “He was a chef and my inspiration. I remember cracking cases of eggs to make various desserts, racing with his pastry chef and the winner would get a dessert. For some reason I always ‘won.’”

At 17 he came to America to work with his uncle at his father’s restaurant, opening in Maine.

“A few months in, my uncle went back to France and I was left to run a kitchen before my 18th birthday,” Bastide recalls. “It was an experience that taught me work ethic in the kitchen. For years after that (this was pre-internet), I would try to recreate recipes from my past all by trial and error, all by taste.”

From there Bastide moved to the West Coast and garnered accolades while working in the kitchens of several San Francisco hot spots. He served as executive chef of Le Bistro, where he earned a spot on the “San Francisco Chronicle’s” “Top 10 New Restaurants” list, and enjoyed a 17-year run as director of culinary at Left Bank before coming to Virginia.

Here, Bastide—a former volunteer firefighter, EMT and rescue diver—hopes to continue to care for people, including through his food.

“I love to take care of people,” he says. “It is in me, whether it be at work or at home. I think of cooking like caring for someone—nourishing them and allowing them to just take a step back, sit down and enjoy.”

Bastide says he is looking forward to exploring the Central Virginia region’s sustainable, locally-sourced ingredients and creating cuisine with “what comes out of the ground and what our farmers bring me to play around with.” 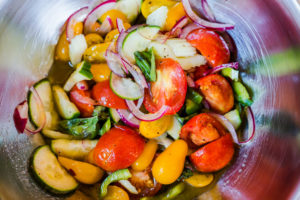 “You would be amazed at what you can find at your local farmer’s markets,” he says. “Build a relationship with local farmers or even better, grow your own gardens like we do here. There is no need for 1,000 spices, sauces and reductions. Start with great, simple ingredients and let them express themselves. My favorite ingredient is the one that is coming out of the ground right now.”

Patrons can expect simple, garden ingredients at Monticello Farm Table. Bastide says he was attracted to the plantation for the opportunity to learn more about the “half French, half Virginian” cooking that Jefferson envisioned and the enslaved made possible.

“I want to offer some historic recipes, like chocolate cream prepared by James Hemmings or Jefferson’s recipe for ‘biscuit de savoy,’ while also using ingredients from our own gardens and farm to create a seasonal, sustainable menu.”

Bastide has been a part of Heritage Harvest Festival at Monticello, including offering Zoom cooking classes that showcased a French brasserie menu while also teaching guests about Jefferson and a virtual conversation with Kevin West, the author of “Saving the Season: A Cook’s Guide to Home Canning, Pickling, and Preserving.” This fall, he hopes to host some onsite events and programs at Farm Table and eventually be able to invite guest to the gardens and café to discuss food and exchange ideas

“There is only one Monticello,” he says. “It is world known. Even when I speak with friends in Europe, they know right away where I am working. Monticello Farm Table is, in some ways, a canvas waiting for the brush. I can’t wait for people to join us here and experience it for themselves.”

This delicious cold soup features one of Bastide’s favorite fruits grown at Monticello—the tomato. The dish draws inspiration from a recipe found in the famous “The Virginia Housewife” cookbook, written by Mary Randolph, who was a member of Thomas Jefferson’s extended family. 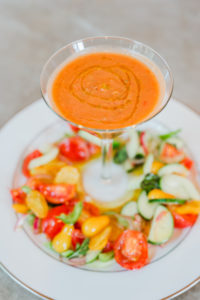 Mix all ingredients above, except the tomato puree or juice, and refrigerate for at least 24 hours.

When ready, add the tomato puree or juice to your refrigerated mixture and combine with an emulsion blender. If using a high-speed blender, use a lower speed to keep the soup from becoming completely smooth. Remember, to adapt to your desire by adding vinegar, salt, spice or anything that you prefer.

March 1, 2017
Getting to Know Virginia’s Cantaloupes

May 1, 2018
Playing with Your Food: Charcuterie Boards