A Culinary Kingdom at The Inn at Little Washington

Photography courtesy of The Inn at Little Washington

As we make our way on winding roads, heading to rural Rappahannock County, I completely lose cell phone service about 30 miles from our destination. The sudden inability to connect to anyone outside of the bucolic bubble I am about to enter gives me a combined rush of jitters and excitement.

My husband and I will soon arrive in the secluded, tiny town of Washington, home to the legendary Inn at Little Washington and its world-renowned restaurant. Both self-proclaimed food nerds, making this trip has been on our bucket lists for quite some time, but after Chef Patrick O’Connell received the esteemed culinary honor of a third Michelin star in 2018, we knew we had to actually check it off. And today is the day. I am ready to check in—and check out—to a place I have imagined as pure magic. 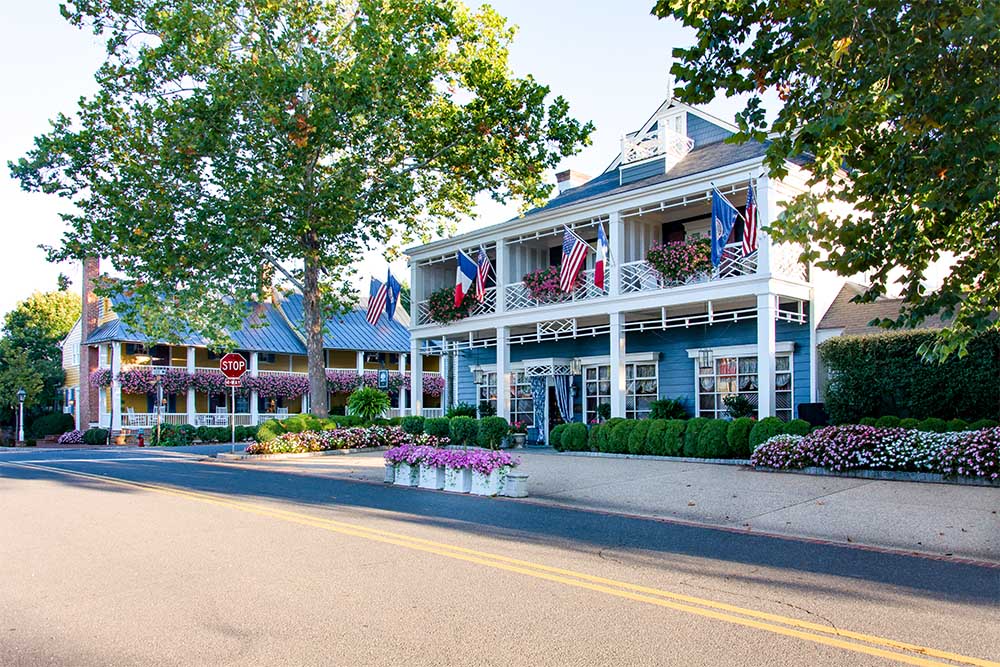 As expected, Washington is anything but bustling—just as I had hoped. Few, colorful buildings house charming shops that lead us to the can’t-miss centerpiece of this hamlet—the bright blue French-influenced inn that appears to have been plucked straight out of the Burgundy countryside. A pair of sharply dressed gentlemen greet by name us upon arrival and invite us inside, where we embark on a tour of The Main Inn’s highlights—the famous dining room, a cozy living room set for afternoon tea service and The Monkey Lounge, painted with the distant horizon and whimsical primates playing musical instruments. Everything is impeccably designed, and I can hardly fathom that this 1895 structure was merely an auto repair garage when O’Connell found it in the late 1970s.

O’Connell and his partner Reinhardt Lynch had been operating a catering business in a farmhouse nearby and began renting the barn-like building with some lofty aspirations in mind. They hired architect Albert Hinckley to help with the reconstruction and found London-based designer Joyce Conwy Evans to transform the interior before the restaurant and inn opened for business in January 1978.

But, of course, visiting the Inn at Little Washington involves much more than simply a fancy meal and place to sleep. Coming here is an experience, and we were hungry to learn more about the 24-acre campus remarkably planned and executed in middle-of-nowhere Virginia. Thankfully, long-time employee Cameron Smith, The Inn’s maître fromage (aka “Cheese Whiz” and king of puns) was about to offer a walking tour of the grounds. 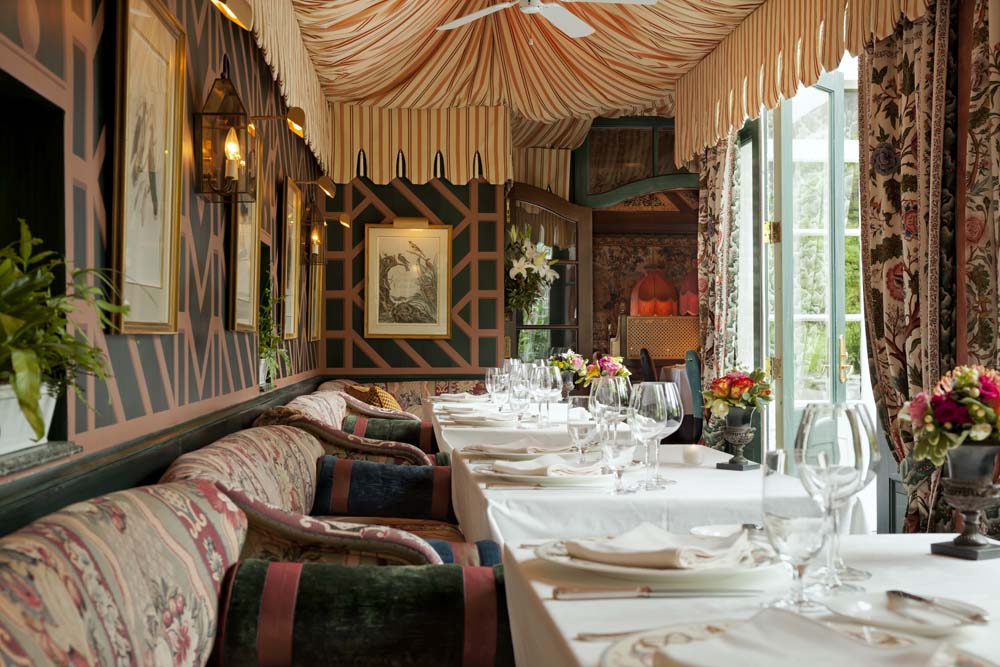 We head out to view the gardens and many of the 22 refurbished colonial buildings, including several cottages also available to guests, Tavern Shops and a ballroom. In between the shops and the Mayor’s House, Smith takes us on a stroll down Perimeter Path, a loop almost a mile long that meanders past the chickens, sheep and Francesca, the guardian llama. He points out that O’Connell’s residence is being renovated and notes how long it is taking to complete the roof (to match Mount Vernon’s) due to the chef’s unrelenting demand for perfection.

As I stroll and listen to all the history wrapped up in this place, it becomes clear that O’Connell is way beyond chef—he’s an astounding visionary. In the introduction to his  book “The Inn at Little Washington: A Magnificent Obsession” he describes how a trip to his culinary kingdom serves as your point of entry into a different state of mind, something he refers to as “fantality—halfway between fantasy and reality—a place where you feel less encumbered by burdensome obstacles—where the impossible is always possible.”

O’Connell has proved the work and extensive thought he has put into The Inn at Little Washington, his fantality fairytale for 42 years and counting, was not only possible but nothing short of remarkable. His dedication to the restaurant and the town have now earned him the elusive three stars from the Michelin Guide, the most famed restaurant rating one can receive in the culinary world (no other restaurant in Virginia can claim even one star). In 2019 he received the James Beard Foundation’s Lifetime Achievement Award. Not too shabby for a guy who started out as an actor and a priest before deciding to teach himself how to cook.

And like the best creatives out there, O’Connell has many future plans for his campus—a roastery, spa, conservatory and Parisian-style café coming soon.

We leave our afternoon journey in awe and head back to The Inn to decompress and discuss our impressions at the afternoon tea, complete with a list of 35 diverse selections. As we sit and sip Italian Green Almondine and Vintage 2010 Caramel Pu-erh Dream, I feel the anticipation building for what I know will be one of the most memorable meals we have shared. 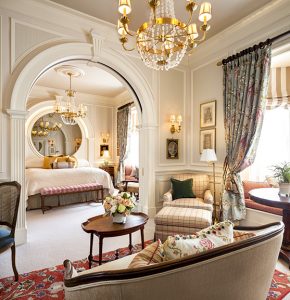 First, we head upstairs to our room—the Jeremiah Tower—to refresh. All of the 11 guestrooms in The Main Inn are named after culinary pioneers who stayed in the rooms. Ours is the most recently renovated suite, inspired by the Ritz Hotel in Paris. It was created from two smaller rooms and features a marble and mahogany bathroom, double set of bay windows and a separate sitting room which can be closed off from the bedroom with enormous pocket doors.

After a bit of recharge, we get all spruced up and find our way to the dining room to begin the multi-coursed feast we have been waiting for. Signature Truffled Popcorn welcomes us and readies our palates as we peruse two tasting menu options—one focused on O’Connell’s French classics (The Gastronaut’s Menu) and the other showcasing the chefs more inventive side (Here and Now). We opt for one of each to sample as much as possible with paired wines.

As the perfectly executed plates begin to grace our table—Carpaccio of Herb-Crusted Elysian Field Baby Lamb Loin with Caesar Salad Ice Cream; “Star-Kissed Tuna and Foie Gras Confit Awash in Black Truffle Vinaigrette; and “Pot A Fue” of Lamb Loin Niçoise with Lamb Sausage, Roasted Bell Peppers and Gremolata, to name a few—the experience feels more like a well-rehearsed show with ideal pacing and service than a meal. Lavish food is balanced with approachable quirkiness, like the unpretentious cheese cart in the form of a cow named Faira, who has just returned from getting some new wheels. Cheese Whiz Cameron rolls her to our table with ease and introduces us to a now favorite fromage—Jasper Hill Farm’s Harbison, a soft-ripened and spreadable cheese wrapped in spruce bark.

Proclaiming that our bucket list dinner did not disappoint would be an understatement, especially because it ends with an even better sweet treat post-dessert—an invitation to peek into the kitchen and meet O’Connell himself, the man behind the mystique. 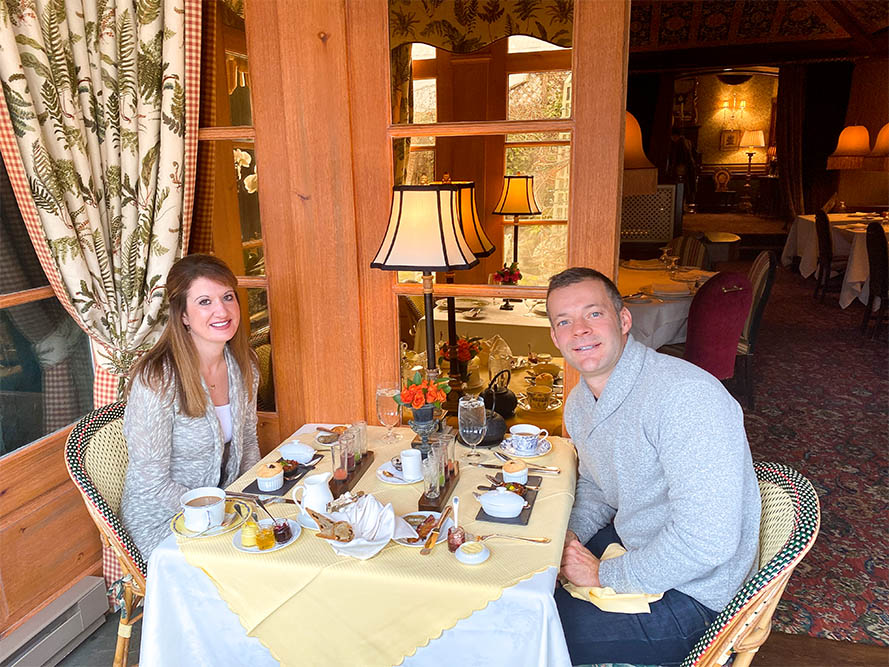 We return to our accommodations completely satisfied to find a note from Luray, O’Connell’s Dalmatian, along with a bit of port and two dog-biscuit shaped shortbread cookies at the bedside.

Despite our amount of evening consumption, I wake up ravenous after a solid night’s sleep and ready for one last chance to dine here, this time in the form of a glorious terrace breakfast that sates us before some final shopping and walking around town.

During our stay at The Inn at Little Washington, I learn that O’Connell believes everyone in the world has their place. Washington and The Inn are—and always will be—his, and I leave feeling so very privileged that they were also mine for the past 24 hours.

“One rarely goes out the way one comes in,” O’Connell has said—and he’s right. It seems the man who turned a rundown garage into one of the most distinct destinations in Virginia knows a thing or two about transformation.

March 1, 2017
The Historic City Of Fredericksburg

The Historic City Of Fredericksburg

September 1, 2016
A Feast for Foodies in Bath County

A Feast for Foodies in Bath County