A few years ago, working with the Blue Ridge Institute at Ferrum College, I trudged through the Franklin County woods to talk one on one with Jimmy Boyd, in the area where the original settlers first made proof-heavy moonshine liquor from distilled grains and crushed corn, and where Boyd brewed up illegal concoctions for years. The recipes used  were passed down over generations, even after Federal Agents—called revenuers —began cracking down on illegal booze.

“When I comed along,” said Boyd, sitting in the auto body shop next to his home in the tiny hamlet of Boydsville, “Revenuers had been out so long that they knew every nook and cranny in these mountains, and you had to find a place that was really rugged and they’d never think there would be a still there before you put one up.”

Brewing up mountain dew has been a family tradition. Boyd learned how to make whiskey from his brother, who learned it from his daddy. His grandfather once ran a mill that sold and ground corn to shiners. But it wasn’t always fun. Boyd, who is also a celebrated clawhammer banjo player who co-founded the old-time band The Dry Hill Draggers, served nearly a year in prison for making illegal shine.

He couldn’t help himself, and he loves to illustrate the craft of home-style moonshining to today’s audiences (working with the Virginia Foundation for the Humanities, he set up a working still at the 2012 Richmond Folk Festival, to the delight of thousands). “There’s something ‘mother about making it that just draws a person to it,” he says. “It’s almost like it’s habit forming, just like drinking it.”

Jimmy Boyd sat with me one afternoon and told me the ins and outs of being the last of the old-time moonshiners.

How to Make Good Whiskey

“You can make whiskey out of almost anything, but to make something that’s got a good flavor, you’ve got to know what you put in it, and how to put it in there, just like a cook. You’ve got to get the right ingredients to get the right taste you want. To make some good tasting whiskey, you need so much rye grain in it and so much corn grain in it. The taste that’s developed around here … is that you put three times as much corn as rye in it to make the blend that’s got a good flavor … and you’ve got to use half as much barley malt as you do rye meal to get a good flavor.”

“Most people think that as soon as it starts coming through what’s called the moneypiece, that they put it right in the jug. But don’t do that. You’ve got to run your whole batch out, and put it in a big container and get it mixed up good to get your proper proof. Most people think you just catch it right out of the worm into the jug and put a lid on it, but that’s not the way it is.”

“I had a brother who made it since he was big enough to run around. And my daddy made whiskey. I remember him taking me to a still site when I was maybe 2 years old. I remember him taking him down the hill on his hip, and I can remember I guess it’s been in the family for I don’t know how many generations. My great grandfather run the mill over here at Endicott and of course he sold a lot of grain who made it … and my brother fooled with it in his younger years. And when I got old enough to tote 60 pounds, you know, I’d hang out with him and I was helping him, you know … Back in them days we’d use wood and you’d have to cut your wood and carry it to the still site, have a pony or a mule to haul it in. Most times you’d use an old saw that didn’t make no noise—little handsaw or crosscut saw. You didn’t do a lot of chopping because it would make too much noise. And you’d have to get the right kind of wood so it wouldn’t smoke so bad, if you wanted to build your fire before dark. After dark it didn’t matter so much. So I got to helping him. And after I fooled around and helped him after several years, I started to thinking I might want to make a batch of my own. So I thought I better start paying attention and learn how …”

“We had various means … we were just like indians. You could spot a strange track or strange shootprint or a bush broke over here … If anybody come around there, unless they was awful careful, we snowed it. You had to keep everything covered up, in case it rained. In order to get to a box of mash, you’d have to throw the cover back. So we’d always rig some sticks under that cover so that when if someone looked in there, they’d fall in and you’d know. You wanted to go somewhere didn’t nobody want to traverse. You didn’t want to set a still up a ridge where a lot of people rambled around … you had to set that thing in a ivy thicket or over yonder in the roughest spot you could find.”

“All the old stores, that was their livelihood, you know—they would buy all the sugar and stuff they could because they knew they would have a sale for it. They could sell that but they might sit for three or four days and not sell a gallon of milk. Anytime they had sugar or corn meal or something, they could sell it.”

There are no Lazy Moonshiners

“It’s hard, the hardest work you ever done.”

Drinking on the Job

“I always drank a little off and on but never drank when I was working, no more than a taste. I’d taste it to see how it was. You don’t have to—most time you can tell by the smell. I still take a little nip every once in a while … there ain’t nothing wrong with it, you know. It’s just like if you read the Bible,  most every page of the Bible has wine written somewhere. I don’t think it’s no deep sin … as long as you ain’t a drunkard.  But you wouldn’t drink it while you was working cause you just don’t do a good job at nothin’ when you are drinking it except run your mouth.”

“You don’t want to tell no more people around than you can help. You never told no body. I used to go make whiskey, and I wouldn’t even tell my wife were I was at. She knowed I worked but what could she do to save me anyway? If I was working close to the house [it was different]. I didn’t tell nobody [about the still]. The more people know something, the more people can talk.” 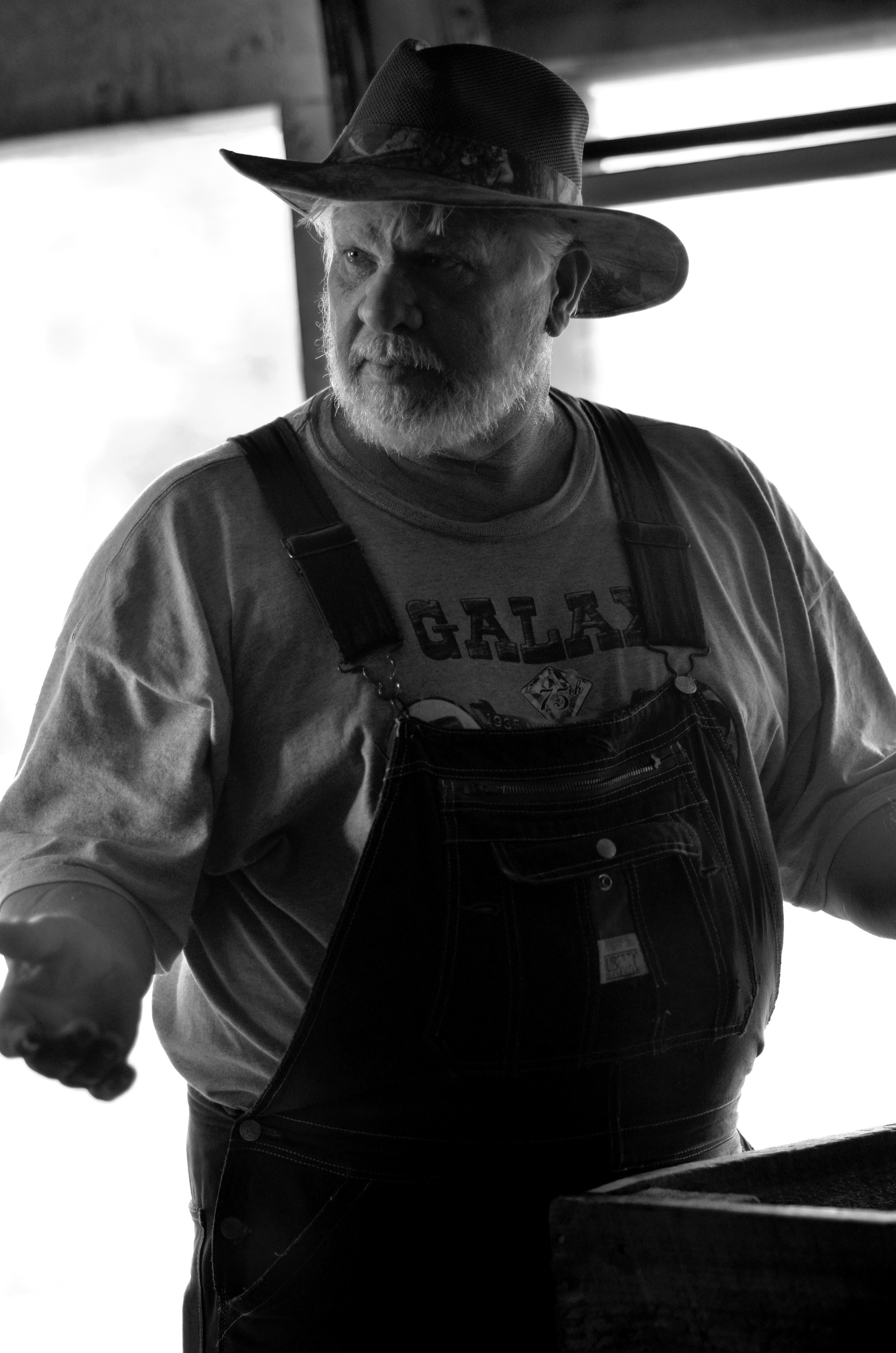 “I got caught several times. All of them were pretty memorable (laughs). You knew you were going down the creek without a paddle when they caught you like that. I guess the most memorable time was when they caught me down on the Henry Road one time. I knowed when I went in that morning that I wasn’t quite comfortable with it, I wore me a pair of tennis shoes and didn’t carry no billfold with me. I had a feeling—I thought it ought to be a good day because it was court day in Roanoke, you know, and that was the day that most of the feds were there because they had to be in court if they was trying somebody. So I kinda figured it might be a good day to work. But I was out of my territory, and the day before we thought we might’a saw a track that didn’t quite match up to ours. We went in that morning and worked and we had got along about 10:30, gettin’ ready to put the cap on the still, and I looked down at the creek there and I seen somebody jerk his bald head down under a stump or a log and so I said, ‘Hey, let’s go.’ Right up the holler we went and we ran into a whole gang of ’em … fence come down across the little holler we was at, three of ’em got us at the fence, me and the other boy both, and I jumped over the fence and was about to go back down to the stills and I got stuck in the mud (laughs). They jumped on me, and I wasn’t going anywhere, I was stuck in the mud.”

“I had a race car driver one time that would haul 4–500 cases a week. He said that’s what kept him in racing. But they finally caught him. I can’t mention no names but he’s a pretty famous character now, at least around this neighborhood. It wasn’t none of my business after he loaded it up and carried them out and paid me. This guy, he had a brand new car, and he would load that thing down from one end to the other. We’d put it in gallon jugs then, and he could put nearly 50 cases in that car. He’d always carry a woman with him, sit right beside him and they’d go down the road like two lovers, you know (laughs) …”

“They are making it to sell nowadays. They don’t leave no bead on it [the bubbles that form with shaken whiskey, used to determine potency], they get the proof down to about 60 proof. And when you get something that weak, it don’t got no flavor to it. It ain’t what you want. They run it out as long as they can and it don’t got no flavor to it to begin with because they don’t put no rye in it. There’s a lot of difference in what they make nowadays. Nowadays they will take the mash in a 800 gallon still and put 50 pounds of rye in it. Back in the old days, if you mashed 800 gallons, you’d probably put close to 800 pounds of grain in it. That’s the difference, 50  pounds to 800, that’s a lot of your flavor, you know.”

“You’d be surprised how many people I have found out in later years that got a government check every month for turning stills in that lived in the neighborhood. There was one around every turn, just about. You thought they were all decent people after they were dead and gone and then you find out they got a dern government check. You didn’t know (at the time) or dire things might happen to them in the night, you know.”

“It’s a subject that’s got a lot of history to it, you know. You wouldn’t believe how many people is fascinated by the way the old people made whisky. And if they don’t come and ask somebody who did a little bit of it, they ain’t never gonna be sure, you know.”

For more on Moonshine in Virginia, go to the Blue Ridge Institute at Ferrum College’s website at BlueRidgeInstitute.org/Moonshine.

See more here about Virginia moonshine and its part in the Virginia Prohibition.